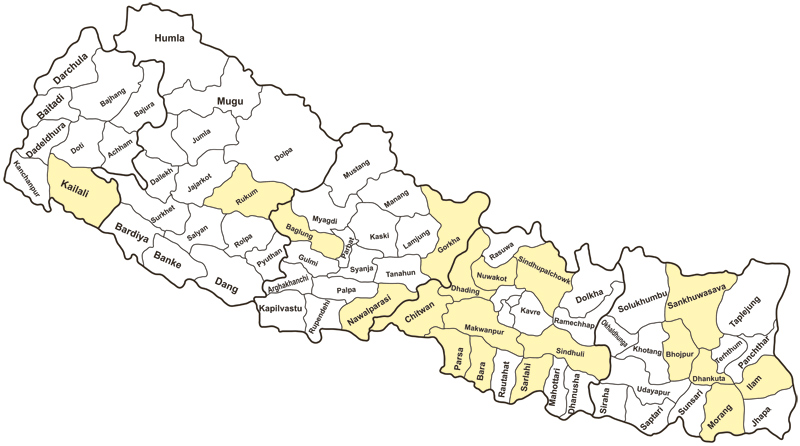 42 infections reported from Chitwan alone
KATHMANDU, Aug 17: Three people including two children have died and 91 others have been infected from scrub typhus that has been spreading in various districts across the country since the last four months.

Officials at the Epidemiology and Disease Control Division (EDCD) of the Department of Health Services (DoHS) informed that a 45-year-old woman from Chitwan, who was infected from the disease, died in the course of treatment.

Scrub typhus is a disease caused by the Rickettsia bacteria. Doctors say the  bacteria is transmitted by fleas, mites or lice and can affect the lungs and brain and lead to renal failure and even lead to heart problems if not treated within 10 days. It may eventually result in death.

“Infections have been reported from 22 districts,” Dr Gunanidhi Sharma, chief of Epidemiology Section at the EDCD, said.

According to Dr Sharma, the District Public Health Office (DPHO) Chitwan has reported the EDCD that, apart from the death of a woman, 42 other people have infected from the disease. He informed that the DPHOs of Nuwakot, Gorkha, Dhading, Nawalparasi, Sindhupalchowk, Bara, Parsa, Kailali, Dhankuta, Sarlahi, Sindhuli, Ilam Morang, Makwanpur, Rukum, Sankhuwasabha, Baglung, Chitwan, Bhojpur and other four districts have reported infection to the EDCD. These DPHOs have also sought help from the EDCD to contain the spread of infection.

“We have already sent guidelines to health facilities throughout the country and directed health workers to take the necessary steps to contain the further spread of the disease,” informed Dr Sharma. He said that the number of infection and death from the disease might increase in the coming days as the EDCD has instructed all DPHOs to inform it about the deaths and infection.

Dr Sharma urged people not to panic because the disease can be treated even at the health posts. “It can be treated with simple antibiotics available at all health facilities,” he added.

According to him, farmers who work in the fields and children playing outdoors are vulnerable to the infection. He suggests avoiding walking barefoot on grass or in the fields and visiting health facilities as soon as there is high fever.

One dies from scrub typhus in Chitwan, over 100 people infected with swine flu

104 infected with scrub typhus in Chitwan

RATNAGAR, Aug 19: As many as 104 people have been infected with scrub typhus in Chitwan so far, said that... Read More...

KATHMANDU, Aug 15: Two children have died of scrub typhus that has been spreading in various districts since the beginning... Read More...