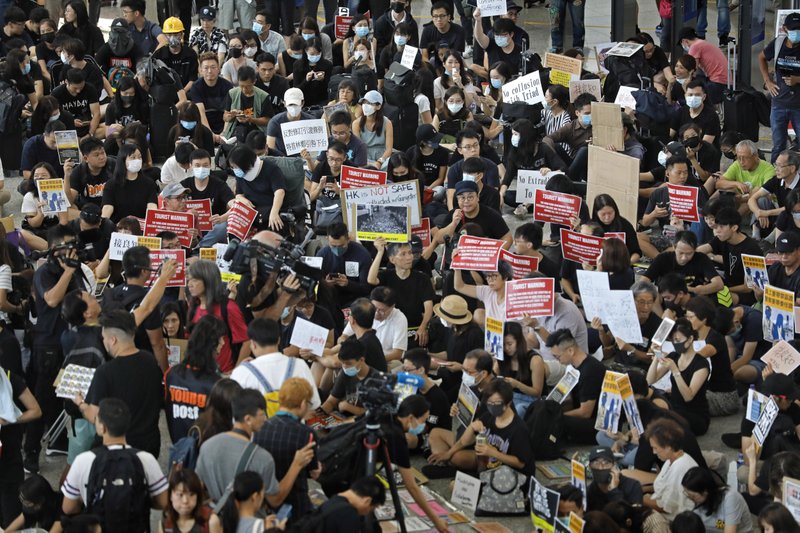 Demonstrators gather during a protest at Hong Kong International Airport, Friday, July 26, 2019. Hong Kong residents have been protesting for more than a month to call for democratic reforms and the withdrawal of a controversial extradition bill. Their five central demands include direct elections, the dissolution of the current legislature, and an investigation into alleged police brutality. Clashes between protesters and police and other parties have become increasingly violent. (AP Photo/Vincent Yu)

HONG KONG, July 27: Thousands of protesters began marching Saturday in a Hong Kong district despite police warnings that their presence would spark confrontations with local residents.

Police refused to grant permission for Saturday’s procession, citing a high security risk. But protesters still moved forward in a show of defiance against the unknown assailants who beat dozens of people while wearing white in opposition to the pro-democracy movement’s trademark black.

The streets of Yuen Long became a sea of umbrellas as the march kicked off in the afternoon. A symbol going back to the Occupy Central protests that shook Hong Kong in 2014, umbrellas have become tools to help protesters conceal their identities from police cameras as well as shields against tear gas and pepper spray.

A few hours before the march began, a man was arrested in Yuen Long for hurting another with a knife, Hong Kong police said. The man is suspected of common assault.

Massive demonstrations began in Hong Kong last month against an extradition bill that would have allowed suspects to face trial in mainland China, where critics say their rights would be compromised. The bill was eventually suspended, but protesters’ demands have grown to include direct elections, the dissolution of the current legislature and an investigation into alleged police brutality in the Chinese territory.