Five days into a complete lockdown to stem the threat of coronavirus pandemic, people across the country have largely obeyed the government’s ruling. In the last five days, Kathmandu Valley has stood still: There have been no vehicles and movement of people, barring sporadic incidents. This is largely because people have realized that Covid-19 can be deadly if preventive measures are not followed. For the country and the government with inadequate medical and human resources to combat this global pandemic, the response of people has been encouraging. If the people disobeyed the lockdown and went with business as usual attitude, the situation could be worse than it is now.

Yes, the government response has not been effective enough. There are reports of lack of coordination among the officials in Ministry of Health and doctors working on the ground. The Ministry has not been able to provide the doctors with personal protective equipments (PPEs) and other vital testing tools, as a result of which they are facing a great difficulty in testing the suspected patients. Notwithstanding, health authorities seem to be working tirelessly. But in this fight against the pandemic, an extremely important part of daily life seems to have been paid much less attention: Food and fuel. 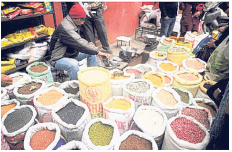 Five days after the lockdown, people have started to run out of food and fuel in their kitchen. Since almost all grocery stores are closed (of course because of the fear of transmission of the disease), there is no place from which people could buy rice, baby food and cooking gas. The government’s assurance that essential items like these will be delivered to the households in coordination with the local representatives has not materialized. It has remained just an assurance so far. Few innovative outlets are reported to deliver goods to households but they are not enough. In this context, the government needs to immediately make an arrangement for the people to purchase essential goods like rice, lentils and cooking gas without hassles. This is because without food and cooking gas in the kitchen people simply won’t be able to comply with the lockdown. Apart from this, there are reports of daily wage earners staying hungry. Their needs should be immediately taken care of. So far the lockdown has kept people inside their houses because they are still able to eat out of the stock they had managed before the lockdown began. Once the stock runs out, people will get restless and they will begin to come out to the streets in search of food. In that case, the government simply won’t be able to stop them because there will be heavy resistance. Given the resources we have the initial response of the government cannot be called bad, though it is not satisfactory. People have not complained much against the government because they know the limitations. But when it comes to unavailability of vital things to keep them alive—food—people won’t tolerate. The government should address the issue of food and fuel before it gets late.

KATHMANDU, April 3: A food expo organized by the Department of Food Technology and Quality Control (DoTQC) in Kathmandu ended on... Read More...

GORKHA, July 1: Some villages in Gorkha are reeling under acute shortage of food, though there is plenty of rice... Read More...