They threaten to burn us alive: Nakkhu locals (with video)


KATHMANDU, Feb 10: Just a few kilometers south from the Mediciti Hospital in Nakkhu, Lalitpur-27 is an asphalt plant being run by Shailung Group of Companies. Sharada Prasad Adhikari, former prime minister Pushpa Kamal Dahal’s current landlord, is the chairman of the group.

The plant has been running for more than four years. When inquired, Sapana Maharjan, a member of Ward 27 of Lalitpur Metropolitan City, she would not talk about the issue over the phone. However, locals say the asphalt plant has become a big headache for them. Those who went to complaint about the plant with the managers were “threatened to be burnt alive in asphalt”. 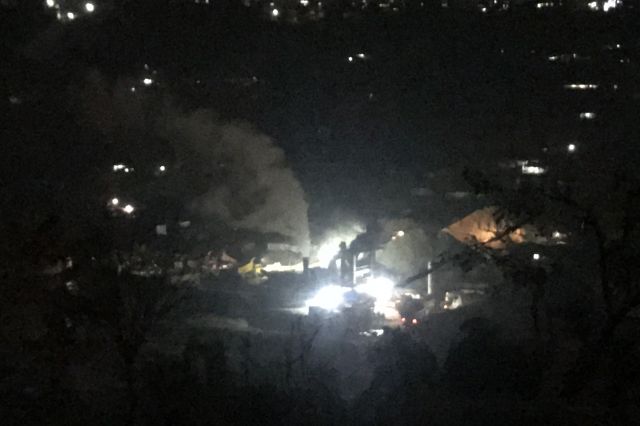 Republica’s investigation has found that that plant is being run illegally, and by creating an environment of fear. Many locals refuse to even discuss the impact the factory has on their life, fearing reprisals from the 'goons hired by the asphalt plant’.

Asphalt plants emit carbon monoxide, sulfur oxide and nitrogen oxide. Kathmandu Valley, with 154 AQI [air quality index] level, is the 16th most polluted city in the world, according to Airvisual.com, a website that tracks city air pollution worldwide. The World Health Organization (WHO) in 2016 reported that the number of deaths as a result of air pollution, mostly in the urban area of Kathmandu, was about 9,943 per year.

According to Breathlife, a partnership campaign of WHO, UN Environment Programme, World Bank and Climate and Clean Air Coalition, a total of 37,399 deaths in Nepal are caused by air pollution per year and this figure includes both outdoor and household air pollution. 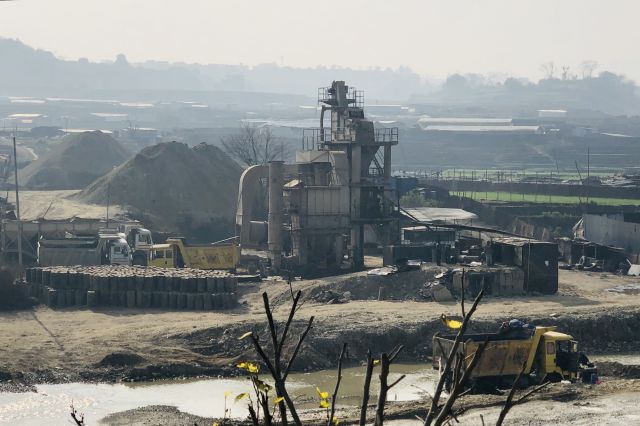 Uttam Khadka, 64, is a local resident of Sainbu, Lalitpur. He says the asphalt factory runs 24-hour a day. “About a year ago, when local residents complained with plant managers about the air pollution, the managers threatened to burn everyone alive in asphalt and since then no one has gone to talk to them,” says Khadka. He also added that that plant has hired goons, who threaten the protesting locals.

Even those who moved to the area with a hope to breathe clean air are not happy. Hit Bahadur Basnet bought a house some six years ago before the plant was set up. His four-member family now regrets the purchase immensely. He says they knocked on the doors of the chief district officer (CDO), the ward office, and even went to Singha Durbar but no one was interested to listen to their suffering. 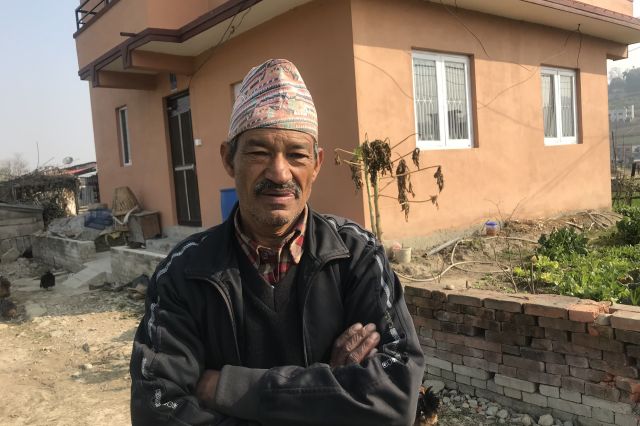 Hit Bahadur Basnet has a house near the asphalt plant. His house is often covered in dust and smoke from the plant.

Before the factory was set up some four years ago, Basnet says, Nakkhu area was a quiet and clean place. Dust, smoke and noise from the plant have made everything worse. “The noise does not let us sleep. And we have inhaled enough of the smoke and dust, but what option do we have? If we go to talk to them, their goons threaten us.”

Lalitpur Metropolitan City’s revenue chief Dilliraj Shakya said the company received a license to operate a sand and aggregate depot, not an asphalt plant at the site. “Such plants cannot be operated inside the metropolitan city. They received permission five years ago to run a depot, but are operating an asphalt plant illegally,” Shakya added. He also said that his office has already written to them to shut down the plant, but they have ignored the instruction Shakya also alleged that crusher plants and aggregate traders have been illegally bringing in asphalt materials. After locals protested two years ago, Lalitpur Metropolitan City ordered closure of the plant citing environmental pollution. But the asphalt plant is operational to this day. 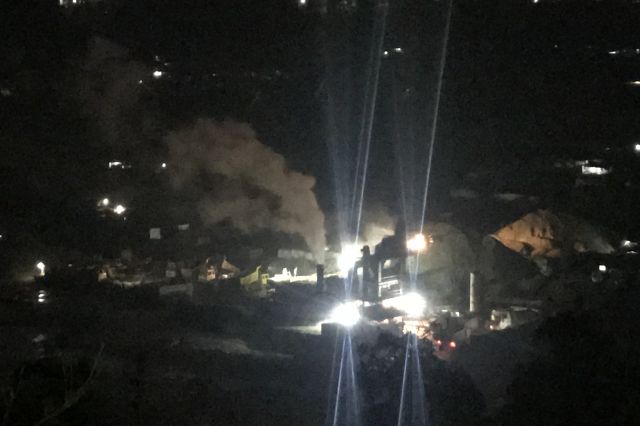 Asphalt plant spews smoke and dust every night for hours

Even those living in makeshift huts in and around the plant site are badly affected. Kiran Pradhan moved to Sainbu from Bhojpur 15 years ago. He lives with his seven-member family. The family grows vegetables and rears cows and buffaloes. They live right across from the asphalt plant. “We are outsiders and are not in a position to speak out. The plant runs the whole night and the noise is unbearable. And pollution and dust are making our life miserable,” says Pradhan. “We went to Singha Durbar three years ago to complaint against the plant, but no one showed any interest to our problems,” Pradhan added.

Similarly, Sapana Tamang moved from Jhapa to Sainbu six year ago. She and her family live closest to the factory. They have chicken and pig farms. “We used to get fresh, clean water from the place where the plant is sitting right now,” says Tamang. However, after the plant was set up the company has laid a supply pipe so that the locals could collect water from outside the company compound. But the water is already polluted by the plant, according to locals.

Settlers like Tamang say they have no option but to endure relentless dust, noise and smoke from the asphalt plant. Laxman Khadka, 69, is another victim. He says the noise and smoke is non-stop. “Many say it is Prachanda’s [Pushpa Kamal Dahal] company and so everyone is afraid to speak out. Because they threaten to burn alive anyone protesting against the plant,” Khadka says.
Chief administrative officer Prem Prasad Bhattarai stated that such types of plants cannot be registered or operated inside the Metropolitan City. “It has not received license from us, we will carry out an inspection and take necessary action soon,” Bhattarai said. Multiple attempts by Republica to contact Sharada Prasad Adhikari, who owns Shailung Group of Companies, were unsuccessful.

It is not just the residents living near the plant who are affected by the pollution, but also the shop owners in and around the Nakkhu Bridge. Hundreds of six and eight-wheeler tipper trucks carry the asphalt to their destinations using the road every evening. The municipality allows tipper trucks inside the Ring Road only after 8 pm but the traffic police allow them to run from as early as 6:30 pm, according to locals. Many local business owners say the traffic police and tippers work hands in glove. But traffic police refute the allegations. “Around 500 tippers and many loaded with asphalt ply this road throughout the night every day. We are overwhelmed by the traffic on the road,” says a police officer who is stationed at Nakkhu police station. 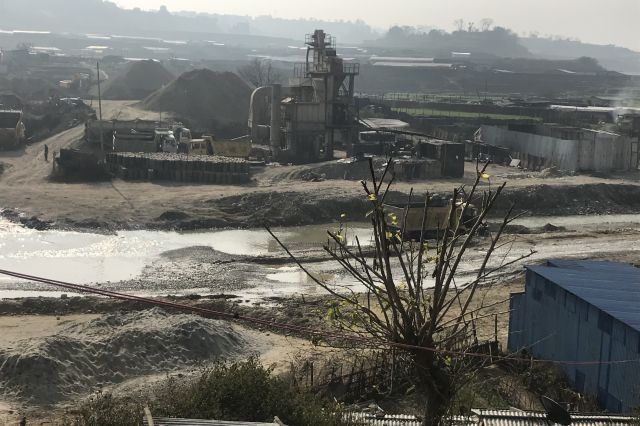 The plant is also polluting Nakkhu river and a fresh water source.

Bikash Shahi has been running a motorcycle workshop for the past seven years right next to Nakkhu Bridge from where hundreds of tipper trucks ferry asphalt every evening. “I cannot even sell the shop and leave because no one wants to buy. We even blocked the tippers a few times but politics prevailed. I go for a full-body health check-up on a regular basis. Cough, cold and skin allergies are common among the shop owners here,” says Shahi. “We gave up!”

Old people and children are mostly vulnerable. Purnima Hamal has been running a clothing store for the last two years in Nakkhu. She says her business has been hit hard by the smoke and dust from the asphalt plant. “Cough, cold, chest pain, allergy and throat infection are common. We don’t even bring our children here,” says Hamal. For some time they used face masks but it was not effective.

Deepak Poudel who owns an electronic goods shop along the Nakkhu road said his business has been badly hit for the last three-four years due to the dust pollution caused by the tipper trucks. “We complained with several authorities but no one listens. Cough and cold is common among us. Tipper owners have connections all the way to the top, so we are helpless.”

Uttam Shrestha, 58, who runs paint shop at Nakkhu says the relentless stream of tipper trucks have killed his business. “Another major problem is sleep deprivation. Politicians are protecting those running the asphalt factory. We even closed this road. But no one listened. Some say even members of the parliament and local politicians are receiving money from the plant.”

Shrestha laments that the local government should have acted to end the problem. “I don’t know what is stopping them.”

KATHMANDU, Jan 17: The Kathmandu Valley where the country’s federal capital is located, has witnessed a slight improvement in the... Read More...

“Why is Dahal worried when I make people smile?” asks Oli
23 hours ago