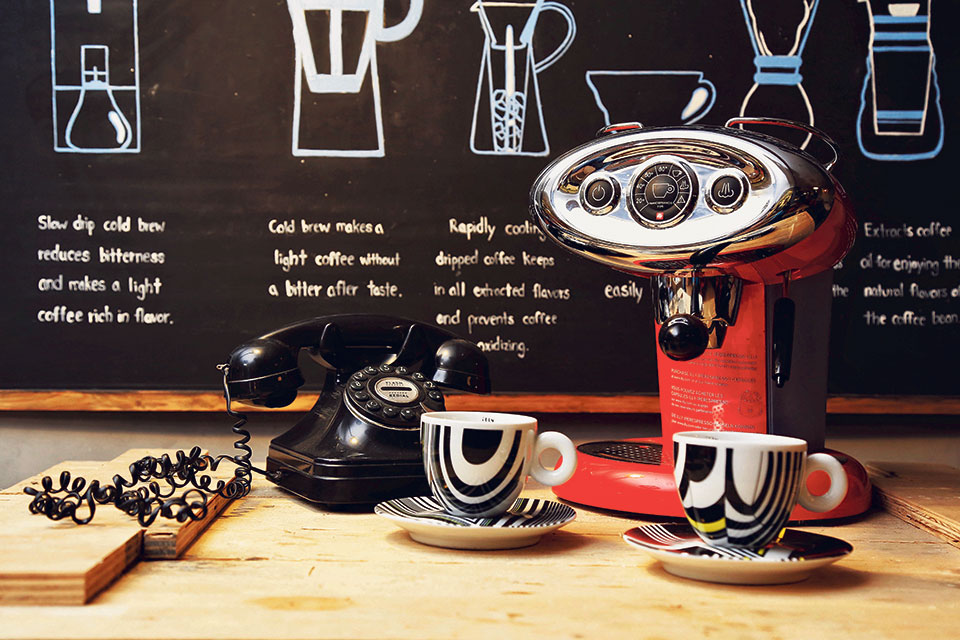 The business venture AKUJ was founded back in 2008 and they started off with officially distributing Illy coffee – an Italian coffee brand that is shipped worldwide – in Nepal. Till date, they are the sole distributors of Illy coffee in Nepal. Sometime later, in 2013, they opened up a supermarket to accompany their coffee-selling business. However, the AKUJ team felt that the Gairidhara area in Kathmandu seriously lacked a good food hub so they decided to scrap out their supermarket and open up an eatery at the same place. So, Deli AKUJ was launched in 2015.

Deli AKUJ was initially a hub for mostly business meetings and a place where you could grab something to eat as you were heading to work but, over time, it has become a place where people of all ages go to, to relax and indulge in some good coffee and cakes. The name of this brand is quite unorthodox but meaningful. Since AKUJ is a family business it borrows a letter from the founding family’s members who have invested in the business. “A stands for the first initial of my grandfather’s name, K for my grandmother, U for my dad and J for my uncle,” explains Manjita Thapa, co-owner and head pastry chef at Deli AKUJ.
Everything from the menu to the decor at Deli AKUJ is influenced by European culture. The café looks chic and modern in a very minimalistic fashion. They haven’t gone overboard with the decoration but there’s just enough for you to appreciate its aesthetics. It’s not overcrowded or overdone and the tasteful, airy decoration makes you feel instantly at ease. You have to say Deli AKUJ has struck the right balance to make the café seem inviting without being overpowering.

“We think of ourselves as a small part of Europe and that very much influences our aesthetics. Also, we are happy that people seem to appreciate the place because of it,” says Thapa adding that everything for their coffee is imported from Italy. She explains that the techniques of coffee making and the ingredients come from Italy. And the pastries (and desserts) are all from France. “I learned the art of French Pastry making and came back here and created the same recipes,” she adds.

Also, the cafe’s breakfast menu is very popular among its customer. The egg benedict deserves a special mention alongside their brunch menu, sandwiches, and desserts. Besides that, Deli AKUJ is known for their coffee that they make using Illy coffee beans and DAMMANN Frères tea – a French company devised under mother company Illy. Thapa and her uncle are the ones who devised the menu for Deli AKUJ and they did so in a way that would compliment the beverages served there.

A lot of thought and effort has gone and still goes into running Deli AKUJ and the results is a place where you feel at ease while enjoying mouth watering drinks and delicacies.  Just above Deli AKUJ – in the same building – is the official showroom for coffee machines sold by AKUJ. They are also the authorized dealer for best coffee machines from different universal brands like HARIO, La Marzocco, La Cimbali, and Illy. Deli AKUJ could very well be your one stop solution for all things related to coffee. This is one Deli AKUJ’s most popular items. It’s made up of only two ingredients – the Illy espresso and hot condensed milk poured on top of it. This is something you can enjoy any day and on any occasion. It has an almost creamy texture and the foam has a smooth consistency. This cappuccino is arguably one of the best served anywhere in Nepal. Thapa believes that most Nepali eateries butcher their cheesecakes. They are cold, chewy and thick and, almost always, they are also over baked. So, at Deli AKUJ they try their best to avoid those mistakes. The cheesecake is surprisingly creamy and just melts in your mouth. They also alter the typical form of a cheesecake with the crunchy base. This cheesecake just has the tiniest amount of crust at the top. It’s yum. And we couldn’t recommend it more. This is a classic chocolate éclairs with dollops of chantilly cream on top. DelI AKUJ pastry chefs subtly alter the classic French recipe and create their own take of it. The fondant strip is well developed, puffed up, and evenly cooked. The flavors are great – you get a rich taste of chocolate but it’s not too sweet. It’s light and well risen and the chantilly cream balances out the éclairs perfectly. This is a 100% cold infusion coffee and has never come in contact with hot water which means it has less than half the amount of activated caffeine in it as compared to any hot brew coffee. To make this cold brew, you infuse brown coffee with cold water for 12 hours. You get the best flavor from the cold brew when you add a little bit of milk to it. Thapa says one should avoid adding any sweeteners to the cold brew if you want to enjoy it to the fullest.

Not just another coffee shop

Red Mud Coffee boldly invites people with their tagline, “Every revolution starts in a coffee shop, start yours.”  From the... Read More...