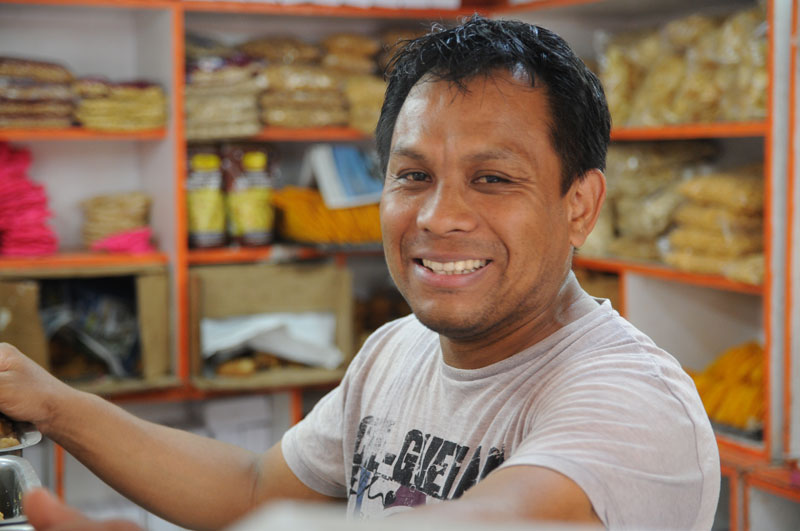 Kasthamandap Bhandar is full of Nepali and Newar sweets that are casually overlooked in the presence of Indian sweets and the likes of Aagan. Rajkarnikar though says his time at the helm of his family sweet shop has helped him realize the cultural importance of food. At his shop, there seem to be specific sweets for every occasion, spanning one’s birth to death. Rajkarnikar particularly prides himself in knowing the exact significance of each. He thinks these sweets help keep our Nepali traditions alive in their own delicious way.

Lakhamari
We may be used to the cylindrical form of Lakhamaris in our markets but they actually come in different forms and for very specific reasons. Recently, Rajkarnikar was making these in shape of a frog and bird for a wedding order. They are believed to be auspicious.

Ausadhi Gutpaak
Unlike ordinary Gutpaak (which is equally popular),  this treat is believed to have health benefits. Cooked in pure ghee with various healthy nuts, raisins and a healthy dose of Batisa, it is often given to lactating mothers and the elderly.

Puja set
As per traditions, there are specific sweets that are offered to the Gods. But since most sweet makers today don’t know the rules, festival seasons tend to be incredibly hectic at the Kasthamandap Bhandar. Families around the city trust Rajkarnikar to deliver them with all the necessary materials.

Well before bread and cookies became a breakfast staple in our country, Durlove Das Rajkarnikar remembers his father treating him to a plate of crispy malpuwas, with some haluwa on the side, every weekend. It was perhaps the only reason, he says, he didn’t mind waking up early on a Saturday. He knew it was meant to be a bribe because, after the breakfast, he almost always had to work a shift at their family owned sweet shop but he took the bait every single time. In Rajkarnikar’s book, it was completely worth it – simply the best treat in the world.

Today, all these years later and his feelings still haven’t changed. What’s more, other people seem to share his sentiments as well. Mornings are one of the busiest time at Kasthamandap Bhandar, the family owned sweet shop that is still running and the traditional breakfast set with hot jeri and swari continues to be one of their bestsellers.

It’s just one of those things to look forward to on the days you decide to spend your mornings at Basantapur. The Kasthamandap may no longer be standing at its spot but people still continue to use that as the landmark to tell more people about the Maru Tole on its left where you shall come across Rajkarnikar’s shop after a short walk. Rather randomly, they also mention to “look for the Disney, Donald Duck poster on the wall.” If you are new to the never-ending lane of crammed shops in the area, the tip really helps.

The regulars though come around warmly greeting Rajkarnikar or one of his three other brothers who help run the sweet shop. Then there are those who continue to come around because they were Rajkarniakar’s father’s customers and those who are descendants of the families who were catered to by his grandfather. When you talk to his clientele, the legacy is apparent.

“We have been around for so long that, I am pretty sure, all natives of the valley have heard of us and come to us,” says Rajkarnikar.

Their family shop may have got its name, ‘Kasthamandap Bhandar’ in the 1970s but his great grandfather had established their family as one of the sweet makers in Kathmandu long before that.

Today Rajkarnikar operates from the ground floor of his house. The front of the floor has been divided as the shop and the back of the room, which leads to a small courtyard, is a part of their kitchen. There are preparation rooms on the top of the building as well as another building nearby.

However, when the sweet shop began it was apparently the size of a small cubicle.

Rajkarnikar shares that he had heard tales of his great grandfather traveling all the way to India to acquire the skills of a sweet maker. It was only upon his arrival that the family could start their shop.

Since then the skills have been handed down from father to son and the entire family has been involved with the business in some form. Rajkarnikar and his brothers are the fourth generation sweet makers.

He still uses the recipes that were once used by his forefathers. Surprisingly, he doesn’t remember being taught to cook these sweets. “Our shop has always specialized in Newar and Nepali sweets like Lakhamari and Gutpak. But I don’t remember our father sitting us down with the recipes. These sweets were around us so much that, I think, we just learnt about them while running up and down the stairs and minding the store,” says Rajkarnikar.

While many other similar old sweet stores around the area have closed down, the Kasthamandap Bhandar continues to steadily carry on its business. Rajkarnikar puts it all down to good will. He confesses that they as brothers really enjoy it when customers come into their shop taking their grandfather’s name or when people who they once catered to bring their own kids along for an introduction.

It seems the Rajkarnikar brothers have also adapted well to the demands of the changing times.

While they were used to only having family assistance in the operation of their family sweet shop, a couple decade ago, they hired more manpower and trained them to cook. Five years ago, they also made strategic business decision to branch out and start packing and outsourcing some of their products like Lakhamari to other shops and marts. Currently, they are also working on designing readymade sweet sets for auspicious occasions like weddings, thread ceremony and so on.

“Back in the day, we didn’t have junk and fast food. Sweets were our only treat but now that the scenario has changed, we have to work hard to survive,” says Rajnikar, “But the fact is that everybody needs a little sweet in their lives.”

Everybody likes a sweet treat. But, in Nepal, we have always had limited options. If it’s not ice cream, then... Read More...

The dreams that he beheld forbade him to seek for greener pastures abroad. Scholar, academician and Sitar maestro Dhrubesh Chandra... Read More...