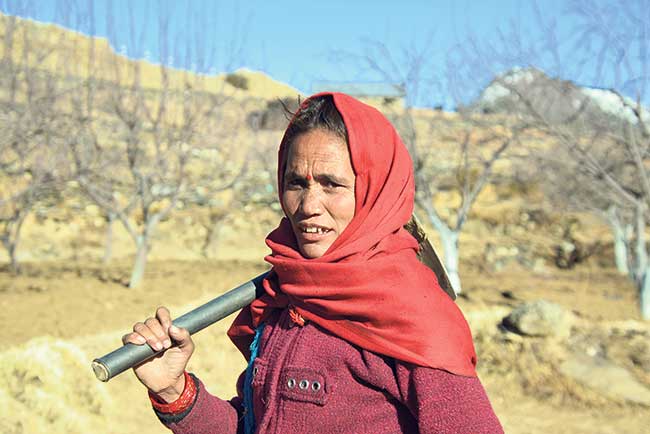 Cost of labor
30-year-old Badri Sarki (pictured above) has always been doing majority of the farm works – from digging the fields, sowing seeds and cultivating crops and vegetables to irrigating the farms and harvesting agricultural produce. The strenuous workload has taken a toll on her health. And Sarki’s isn’t a one-off case. The situation is the same for many women in the Karnali region where agriculture is highly labor-intensive. Ram Saran Tamang reports.

In the remote Himalayan districts of Karnali region, policymakers assess that women carry out around 75 percent of the total works in farms and that the work is highly labor intensive. Despite their significant contributions, their safety and health needs are being overlooked. And the women suffer silently.

Hardships on the hills
Four years ago Bhadri Sarki, 30, felt her womb slip out. The condition, known as uterine prolapse, was a result of strenuous farm works throughout her pregnancies and immediately after every birthing.

“I have always been doing majority of the farm works – from digging the fields, sowing seeds, and cultivating crops and vegetables to irrigating the farms and harvesting agricultural produce,” said the mother of three while working on her small patch of farmland in Dhaulapani of Tatopani Rural Municipality in Jumla, about 830 km north-west of Kathmandu.

Sarki was just 16 years old when she first gave birth to a daughter. She never got adequate rest because she had farm works and household responsibilities to take care of. Even today, she is occupied with one work after another, from dawn till dusk.

“Women have to perform even the husband’s part of farm responsibilities. They are barely at home as they often travel to India for employment,” said Sarki, who has to lift heavy weights like a load of timber and jars of drinking water to take home. Carrying out these tasks lead to a lot of physical discomfort but Sarki has to bear it.

Another local woman farmer, Parbati Raut, 37, shares her grief. Her eldest daughter, who just completed her Secondary Education Examination, recently had a stillbirth. “She was six months into her pregnancy when it happened. It’s because of her having to carry heavy loads,” said Raut.

The situation is no different at the villages of neighboring Kalikot district. All her life, Belkosha Bohora of Tilagufa-2 has been involved in farm works and taking care of cattle. She often has to carry loads that are heavier than her.

Like most women of her generation, Bohora was deprived of education and alternative livelihood options. Forced to marry at an early age and carry out labor-intensive works, she claims to have lost eight out of 12 children to stillbirths and hardships of the hills, which eventually resulted in a prolapsed uterus.

Such situations are very common in Karnali, namely the five districts Dolpa, Humla, Jumla, Kalikot and Mugu. Karnali ranks the lowest in Nepal’s Human Development Index (HDI), which is calculated based on health of people, their education level, and standard of living. Nepal Human Development Report 2014 puts Karnali’s HDI value at just 0.398, indicating that the region lags far behind in wellbeing.

Hesitation for treatment
Doctors had told Sarki of Dhaulapani that it was imperative to have her uterus removed once she turns 30. However, she said she was in no position to seek treatment for her prolapsed uterus even if it were free of cost.

Her only daughter suffers from intellectual development disorder and cannot help much in farms and household works. With nobody to rely on to fulfill her share of responsibilities, Sarki said she simply could not afford a year-long recovery period if she opts for surgery.

“What will we eat if I’m unable to work in the farms?”

According to Upadhyay, there is widespread belief in the community that the condition should not be talked about or else it will worsen. Some women also believe that surgery will render them unable to work for the rest of their lives, thus rendering them worthless to their families.

Most disturbing perhaps is the belief that not working and resting will make women suffer an arduous and difficult delivery, as stated in Amnesty International’s report titled ‘Removing an Unnecessary Burden: Gender Discrimination and Uterine Prolapse in Nepal’.

“We have been introducing campaigns aimed at women’s health time and again. But such beliefs make it difficult for women to come forward for treatment. We need to bring about awareness to tackle such problems,” said Upadhyay.

In Sarki’s case, it was only after much persuasion that she was finally willing to undergo treatment at the next free health campaign. But many other women are silently suffering the same pain. It seems the serenity of Karnali veils the harrowing agonies of its women.

Call for modernization in agricultural practice
Agriculture in the western and far-west region of the country is still highly labor-intensive. Due to a dearth of technology and machinery, women take on laborious works compromising their health, which consequently results in various complications including uterine prolapse.

A study conducted in 2002 reported a prevalence of uterine prolapse of up to 25.1 percent out of 2705 women in the far western region. Because of the alarming state of women’s health caused by overwork, there has been a growing voice calling for setting up agricultural research and technologies tailored to their needs.

Gradual changes in terms of technology and innovation in agricultural sector are being noticed of late. Just recently, Tatopani Rural Municipality started operating solar water lifting pumps for irrigation in its wards one and six with support from ‘BICAS Project’ of Practical Action. Now women in the area no longer need to carry heavy water jars and buckets for irrigation.

The same project has also aided communities of Tilagufa-2 in Kalikot in installing and operating a gravitational ropeway service to transport goods. The village does not have motorable roads and locals were forced to travel back and forth between the village and market while carrying heavy loads through treacherous narrow paths. Now, women don’t have to ferry heavy loads of agricultural produce including apples and herbs to the market and bring daily essentials back home the same way. At a nominal fee, they can simply use the ropeway for it all.

Elected representatives and stakeholders have stressed the need to introduce and replicate similar women-friendly technologies in many parts of the region. Policymakers are also supporting trainings related to women empowerment and livelihood diversification so they don’t have to depend on labor intensive works to make a living.

Tikaram Sharma, undersecretary at Ministry of Agriculture and Livestock Development, said it was high time that all the stakeholders collaborate and actively work together to introduce and implement women friendly technologies in agriculture. He stressed on the need to develop proper mechanism for women’s capacity building and also assured commitment for the same from his ministry. 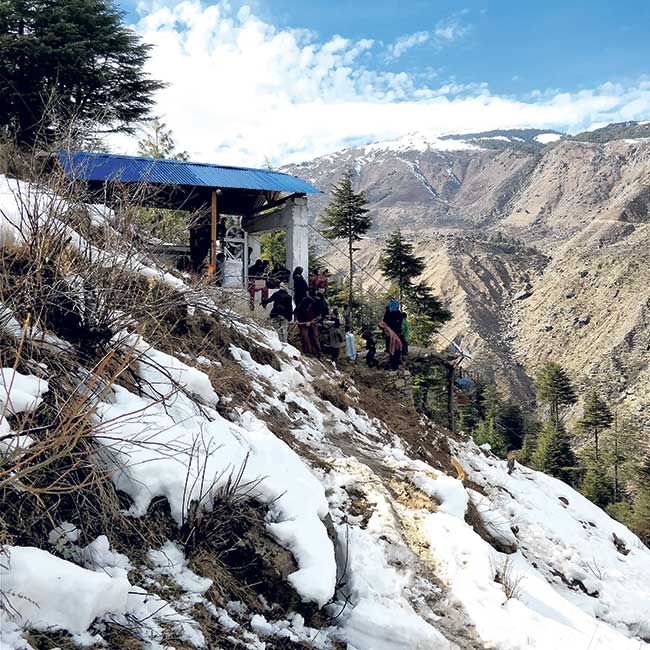 KATHMANDU, July 16: The incessant rain during the last couple of days has caused agricultural losses in Province 1 amounting... Read More...

KATHMANDU, Oct 22: The National Farmer’s Commission has urged the government to fix the ‘consent price’ of major crops as rice,... Read More...

Study of agriculture and forestry in priority: PM Deuba

Govt’s directive has led to a semi-lockdown situation, lament tourism entrepreneurs
15 hours ago

84% youth suffering from anxiety due to COVID-19: Survey
6 hours ago

Nepal thrash Malaysia by 69 runs, will take on the Netherlands in final
11 hours ago