The proposal to change Province-5 boundary is unconstitutional 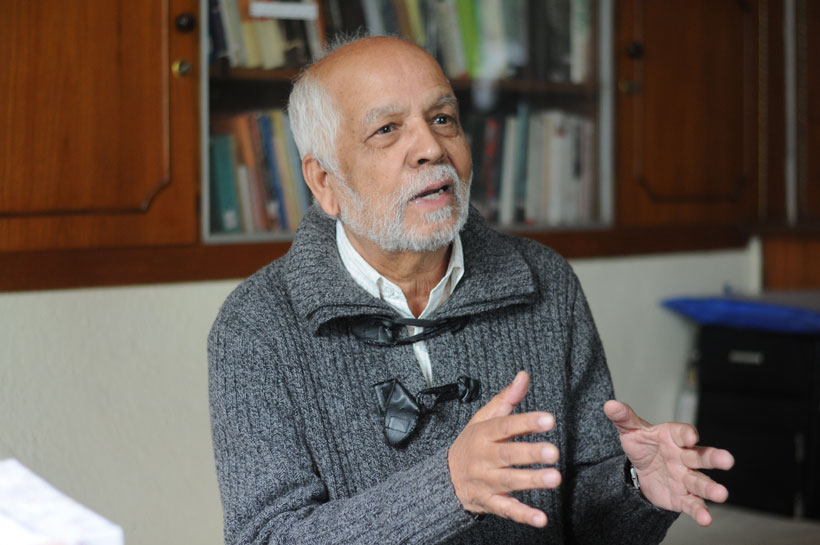 As someone closely involved in the constitution-making process right from the start how do you answer the critics of the new constitution?

Our political parties accepted the notion of a Constituent Assembly writing the constitution of Nepal and participated in CA elections for the same purpose. So even though some forces today have reservations over some points of the constitution, they too took part in elections and were represented in the Constituent Assembly. They took part in the game and agreed to play by the rules, but just because the result has not been in their favor, they can’t now reject the result. So they can express reservations but they cannot reject the constitution outright. The CA functioned on the principle that the constitution would be promulgated when two-thirds majority passes it.

As a constitutional expert, how do you view the proposal for the second amendment of the constitution? For instance the main opposition party has termed the proposed amendment as ‘unnatural’.

If the parties must make amendments, they should do so under the provisions of the new statute. For this they should first go to elections. If they have reservations on the new constitution, they can make these reservations their electoral agenda. Or like-minded forces may even form an electoral alliance for a fresh mandate. The only way this constitution can be amended is through the new federal parliament that comes into existence after a fresh mandate. My point is if you are thinking of amending the constitution, do so by staying within the framework of this constitution. They cannot seek amendments that are not permitted by the constitution.

So in your view the current parliament has no right to amend the constitution?

If that is the case, even the current proposal to alter the boundaries of Province-5 is unconstitutional, isn’t it?

Yes. Because there should be consent of both Province-4 and Province-5 if hill districts of Province-5 have to be included in Province-4. Again, the constitution has not granted this power to the current legislature parliament. Any change in the boundaries of Province-4 and Province-5 should be decided by provincial assemblies of these provinces. This is why the current bill to alter the boundaries of these provinces is unconstitutional. This is exclusively under domain of provincial assemblies.

It is true that the constitution allows this legislature parliament to make some decisions related to provincial assemblies, in the absence of these provincial assemblies. But this does not include the power to change provincial boundaries. Doing so would be against spirit of the federal system. In federalism, it is the provinces which decide on their rights including the power to alter boundaries. If parties push ahead with the second constitution amendment bill, it will set a wrong precedent. Political parties should not assume the powers that have not been granted to them by the constitution.

But since the same legislature parliament has already amended the constitution once, why can’t it again do so?

That amendment is valid because the constitution allowed it. And it was not related to the rights and powers of provincial assemblies. This time we are talking about altering the boundaries of provinces. This is why it is invalid.

But can’t the constitutional provision that makes it mandatory to seek the advice of provincial assembly itself be amended?

This is not the issue now. The parties are not discussing this option. They are rather claiming the right to alter the boundaries through the legislature parliament, which the constitution does not allow.

The prolonged political logjam has also bred cynicism about federalism itself. Even the chairman of the main opposition, KP Oli, has now accepted that federalism was forced on Nepal. How do you view this debate?

The belief and convictions with which federal system was adopted is slowly eroding. But it would be too early for the parties to dismiss federalism because we have not even started implementing it. Only when you start implementing it can you correct its flaws and weaknesses. You may then even feel that it is impossible to implement. But our political leaders have started doubting federal system even before it is implemented. If you believe in the constitution, you must implement federalism.

If you take federalism as a political experiment, you have not conducted the experiment either. It’s like you have completed the electrical wiring in your new house, installed lights and switches and then complain that there is no light. But you haven’t even switched the system on. You need to get the basics right first. Moreover, it is up to the federal parliament and provincial assemblies to decide whether they want a federal system or not. It is not for this legislature parliament to decide.

So rather than debate it now the question of federalism, in your view, should be made electoral agenda of political parties?

Yes, if some parties don’t believe in federalism, they should go to the people with this agenda. If they get the people’s mandate to do away with federalism, they might do so. If other parties believe federalism is a must, they can also take this agenda to the people. If they get majority vote, they can implement it to their liking. But this is not how parties are thinking. They are stalling other business of the parliament, including passage of vital electoral laws, in the name of the dispute over the amendment bill. This is not done.
Even more surprising is the fact that those seeking amendment say the amendment bill needs to be further revised, but they do not say what issues need to be revised. If revision is what they want, they should work on it, but why obstruct the parliament? If Congress, Madheshi forces and Maoist party have common stand on federal issue they can also go to the people through a common manifesto.

There are less than 13 months to go before the constitutionally binding deadline for the three sets of elections. What kind of constitutional crisis do you foresee if these elections cannot be held on time?

The constitution cannot be amended to extend the term of current legislature parliament. If they opt for this, it will be tantamount to rejecting this constitution. So we have no option to holding the three sets of elections before January, 2018.

Coming back to the amendment proposal, won’t it be right to say that marginalized groups like Madheshis and Janajatis have never accepted this constitution and hence seek amendments?

You sometimes talk about our bilateral and multilateral donors needlessly complicating the constitutional issues. Can you elaborate?

There is a lot of foreign intervention in our politics. Even today India has not welcomed our constitution. Foreigners have been saying that the constitution should be made acceptable to all.  During the time of the first CA, some foreigners openly lobbied in favor of certain agendas. Foreign influence is in evidence even today. This is an open secret. But parties cannot make it an excuse. They should be able to take the decision on their own. If Madheshis and Janajatis have grievances, we should not look up to foreign actors to bring them on board. To say that we cannot solve our own political problems because of foreigners is also to question our independent status.

Finally, how do you think can parties come to a meeting point?

There are some weaknesses in constitution. But we should try to remove them on our own. Election, in my view, is the way out. Some may be thinking of making the weaknesses of the constitution their election agenda. Others may think that they will not be in a position to amend the constitution if they lose the election. There may be such interests but our political leadership should put the country first. Those in leadership position should honor the dignity of their positions. If they bow before outsiders, it will mean the whole country has bowed down. You cannot become ministers by taking oath under this constitution and yet refuse to implement it.

Parties should hold constructive dialogue to pave the way for early election, for timely elections are the only constitutional way out.