Ram Pyari Kami from Hiya Khola of Tatopani rural municipality-6, Jumla wakes up early and heads towards the Karnali Highway. There, she will grind stones to meet her daily needs because her farmland barely produces food that would be sufficient for three months. At 35, Ram Pyari is a mother to five children, all of whom are malnourished because she lacked nutritious food during her pregnancy and in her maternity period. Four of her children are daughters.

Lagna Maya Kami from Lum village of Patrasi rural municipality-4 married at the age of 15. At 19, she was a mother of two, both of whom are malnourished.

What is food insecurity?

At the World Food Summit in November, 1996, the World Food Organization defined food security as “a situation that exists when all people, at all times, have physical, social and economic access to sufficient, safe and nutritious food that meets their dietary needs and food preferences for an active and healthy life”.

The definition highlights four dimensions of food security: physical, economic and social, access to sufficient nutritious food, and a stability of all three elements. Instability of any dimension leads to food insecurity. In Jumla, depleting food productivity, child marriage and poverty are contributing to food insecurity, and predominantly affecting women and their children.

When Jumla was linked by roads in 2006 AD, many farmers left agriculture and started to construct hotels and shops along the roadside. While road networks triggered small enterprises, it led to a decrease in farming.

Bhairab Dharala is one of the many farmers who left agriculture and entered into business. He believes that the road networks had led to an increase in food imports. Before the roads came, his family reared cattle and grew millet, buckwheat, and potatoes. The crops were sufficient to feed the family for a year. Now, his farmlands are barren. Some of his children are studying while others are either migrant workers or working in the district itself.

“Who would work in the fields when the harvest doesn’t equal our toil? Besides, there aren’t people from whom we can see support as well,” Dharala said.

Amid increasing trend of foreign employment, Jumla is left with women, elderly and the children. Those left behind have their own constraints to work in the fields. As a result, food production has declined, Bhakta Bahadur Chaulagain, 74, from Tila rural municipality, opines.

The misuse of social media, smartphones, and technology is contributing to an increase in child marriage as much as illiteracy and poverty are.

The District Agriculture Development Office states that production of winter crops reduced by 20 to 25 percent. According to Balak Ram Devkota, the district's planning officer, winter crops such as wheat and millet continue to see a fall for three years in a row.

Climate change has also affected yields. Farmers continue to depend on timely monsoon to irrigate 23,166 hectares of terraced farms in the district. However, untimely rainfall, drought, landslides, and hailstorms ruin the crops. Part of the 3,269 hectares of land that has access to irrigation has been converted into houses.  These have reduced the district’s food productivity by 15 percent.

The District Agriculture Development Office, Jumla states that 26, 615 metric tonnes of paddy, maize, millet, wheat, buckwheat, and sugar are produced annually. According to DADO’s senior agriculture development officer, Bharat Prasad Kandel, the district is left with just 16,390 metric tones (MTs) of food grains after farmers use 10,000 MTs for seeds, grains and to brew alcohol. He adds that Jumla requires 21,033 MTs of food each year. A simple calculation shows that the district is short of 4,643 MTs of food grains every year. “What is more concerning is the fact that farmlands are being left barren and shrinking quicker,” Devkota said.

Nepal is one of the three countries with the highest number of child marriage in the world. The 2016’s Nepal Demographic and Health Survey showed that of the total number of women between 25 to 49 years group, 65 percent were married by the time they reached 15 (13%) or 18 (52%) years old, despite the fact that the legal age to marry is 20 years. According to consolidated data by Karnali Province’s Ministry of Social Development, child marriage in the province’s 10 districts accounts for 52.7 percent of all marriages. In Jumla, 20 percent of all marriages are child marriages, according to the Ministry’s Women Development Officer, Anita Gyawali.

The misuse of social media, smartphones, and technology is contributing to an increase in child marriage as much as illiteracy and poverty are. In order to end child marriage by 2030 AD, Nepal has introduced the ‘National Strategy on Ending Child Marriage, 2015’. The national strategy also highlights how child marriage affects adolescent girls and women: bad marital relationship, health complications due to early pregnancy, gender and sexual-based violence, child labor and human trafficking among others. In Jumla, one of the common problems of child marriage is malnourished children.

Nineteen years old Lagna Maya from Lum village of Patrasi rural municipality-4 has a first- hand experience of the impact of food insecurity. A year’s work in her farmland produces foodgrains just enough for three months. For the remaining months, she has to work as a laborer. She hasn’t been able to register her marriage nor the birth of her first child due to early marriage.   During her pregnancy and after becoming a mother for the first time, she lacked access to sufficient nutritious food. As a result, her son is malnourished. Without any registration, she is deprived of a monthly allowance of Rs. 200 that the government provides for children of Karnali province under the Child Nutrition Subsidy.

She said that as she had to work as a laborer, she couldn’t breastfeed her son on a timely basis. Lactating mothers are encouraged to practice exclusive breastfeeding for a minimum of six months. However, Lagna Maya was forced to rely on supplementary milk from cattle as she couldn’t secrete enough milk to feed her baby. 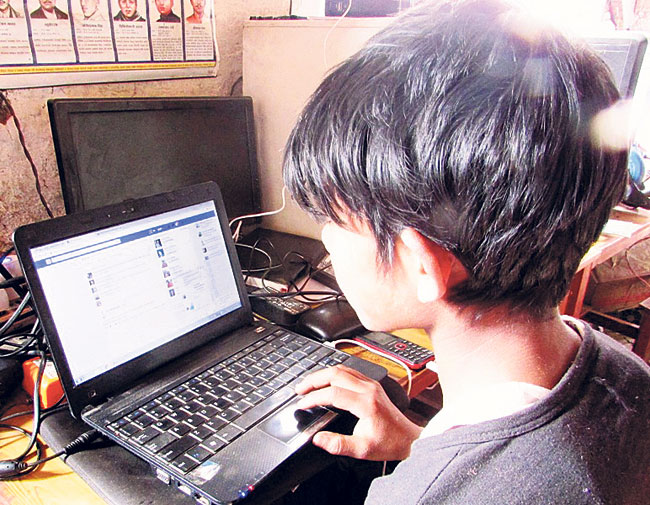 State of malnourishment and nutrition budget

The 2014’s Human Development Report shows that 54.10 percent of children under the age of five are malnourished in Jumla.

According to Angad Bahadur Shahi, the district’s public health officer, lack of nutritious food, early and frequent pregnancy, illiteracy, poverty, work-burden among women, lack of sanitation, and consumption of junk food are contributing to rising cases of malnutrition in the district. Another reason includes lack of exclusive breastfeeding, even when a mother’s milk itself is sufficient for an infant for six months, he added.

To reduce malnutrition among infants, the government has launched 1000 Golden Days. It also provides three kilograms of cereals every month until children reach the age of two.  When mothers give birth at health facilities, they are provided with Rs. 1,500 as transportation cost. In addition, the government has been providing Nyano Jhola (Warm Bags) since 2013. Nyano Jhola is a bag pack which contains maternal and baby clothes and it is given to the newly born babies and their mothers.

Likewise, the government also provides mothers from the Karnali province with a subsidy of Rs. 200 per child (with a cap on two children) to reduce malnourishment under social security in every quarter, according to Chettra Bahadur Budhthapa, program officer at District Coordination Committee, Jumla.

Each local government of Jumla has allocated between Rs. 1 to 1.2 million to reduce malnourishment. The local governments of Jumla consist of a municipality and seven rural municipalities. According to Budhthapa, the then District Development Committee spent Rs. 20.68 million to improve child’s nutritional deficiency from Fiscal Year 2071/72 BS. The DDC’s expenditure does not include the budget that was allocated by the District Health Office for the same.

“We are working collectively to address the problem. However, two biggest problems are illiteracy and poverty,” Angad Bahadur Shahi, the district’s public health officer, said. He added that parents also needed to spend the allowances they received from the government for their children to feed their offsprings.

One of the major reasons for food insecurity is poverty. With 51.2 percent of the total population living below the poverty line, Karnali is one of the poorest provinces, according to the 2017’s Multi-Dimensional Poverty Index (MPI) by the National Planning Commission.

According to Regional Agricultural Directorate, Surkhet, 800,000 people lack access to basic needs such as clean drinking water, sanitation, and cleanliness, electricity, health and education in the province. The government aims to reduce poverty below six percent to meet Sustainable Development Goals by 2030 AD.

While the MPI lacks district-wise analysis, Nepal’s Human Development Report (HDR) of 2014 shows that Jumla’s Human Development Index, calculated by average life expectancy, literacy and per capita income, stands at 0.409.  A complimenting Human Poverty Index shows that 42.09 percent of the total population is below the poverty line in Jumla. The Poverty Index shows that there are 13 other districts where poverty is more acute. In the poverty ranking, Jumla ranks at 11.

Ways to improve the condition

“This itself isn’t sufficient to reduce the district’s food insecurity,” Mun Bahadur Rawat, the Jumla’s district’s forest officer said. He opines unplanned road construction without assessing the environmental impact has decreased fertile lands. He added that such short-sighted development could lead to new natural disasters such as floods and landslides in the long run.

Amid increasing outflow of youths as migrant workers, Bharat Nepali from Tatopani rural municipality-4 opines that the government should bring policies and programs that would help to create jobs within the country in order to retain youths. Program Officer, Chettra Bahadur Budhthapa opines the same. Meanwhile, Bharat Prasad Kandel, senior agriculture development officer, believes that the ability to adverse decreasing farmlands would help to increase productivity and reduce food insecurity.

(This article has been translated and reprinted with permission from MahilaKhabar.)