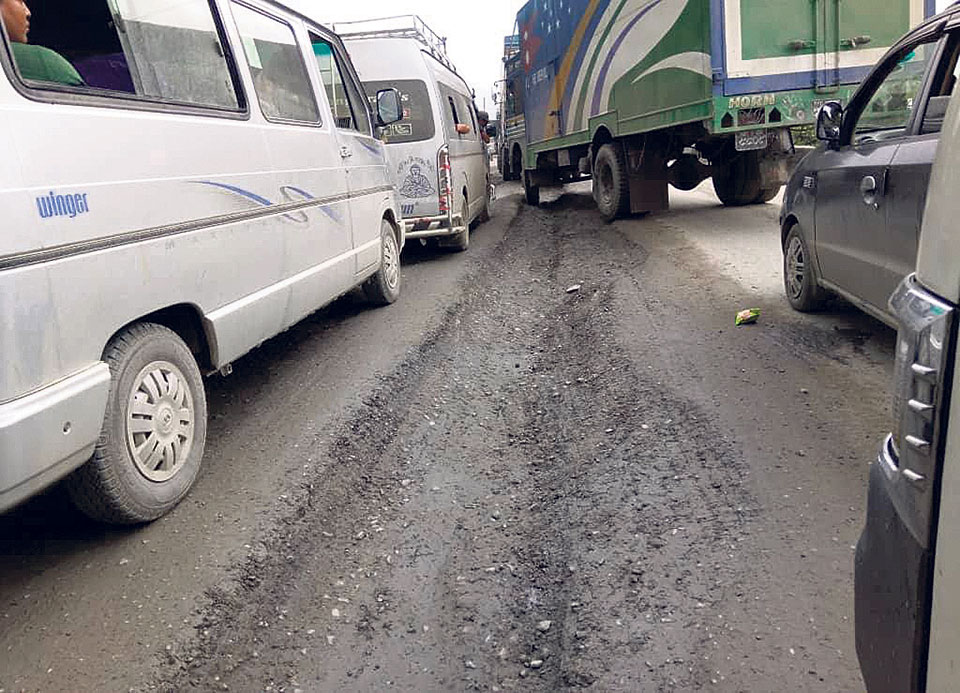 DHADING, Sept 4: After leaving Dhadingbesi of Dhading at 5:30 in the morning, a passenger bus reached Kathmandu at 3 in the afternoon. Normally, it is a three hour distance but the miserable road has made travelling lengthier these days. The sloppy and bumpy road, multiple bends, overloaded and speeding vehicles, more often than not, lead to congestion. That in turn leaves passengers stranded for hours.

Hours-long traffic congestion on the Naubise-Nagdhunga road section, the main entry point to Tribhuvan Highway has been a headache for the passengers.  They are compelled to travel along the route by risking their lives. The oldest highway of the country is in a dilapidated state, but the government has done nothing to repair it. “An extremely high number of potholes and multiple bends have increased accidents on the highway,” said Ram Bahadur Shrestha of Dhadingbesi.

Drivers are often seen struggling in the middle of the road to take their vehicles out of potholes. “The government has turned a blind eye to the condition of the Tribhuvan Highway,” said Shrestha, adding, “It has become difficult for the people to reach their destinations on time.”

Especially, the condition of the left lane of the road has been worsening day by day. As the asphalt has come off, some parts of the road look no less than canal. Driving is more troublesome especially during monsoon. Even ambulances have to bear the ordeal of traffic congestion due to the narrow road.

Pipalamod, Jhyaplekhola, and Tileghar, among others, are the bends, which are most congested. Drivers complain that their vehicles are ‘damaged’ earlier due to the poor condition of the road. Though vehicles weighing up to only ten tonnes can operate on the road, vehicles weighing up to 15 to 16 tons ply the highway every day. Heavy cargoes entering from India have badly affected the left lane of the road, which has started caving in.

Managing vehicles has become a great challenge for the traffic police officers of late. This highway connects Kathmandu with 67 districts of the country. Drivers fear of getting into another trouble if their vehicles are damaged in the middle of the road. Traffic police lacks even the minor tools and equipment required for repairing vehicles.

Taking advantage of the traffic congestion, the restaurants and hotels in various places surcharge the passengers. Those who leave home with limited budgets are the ones to suffer the most here.