The many kinds of meditation 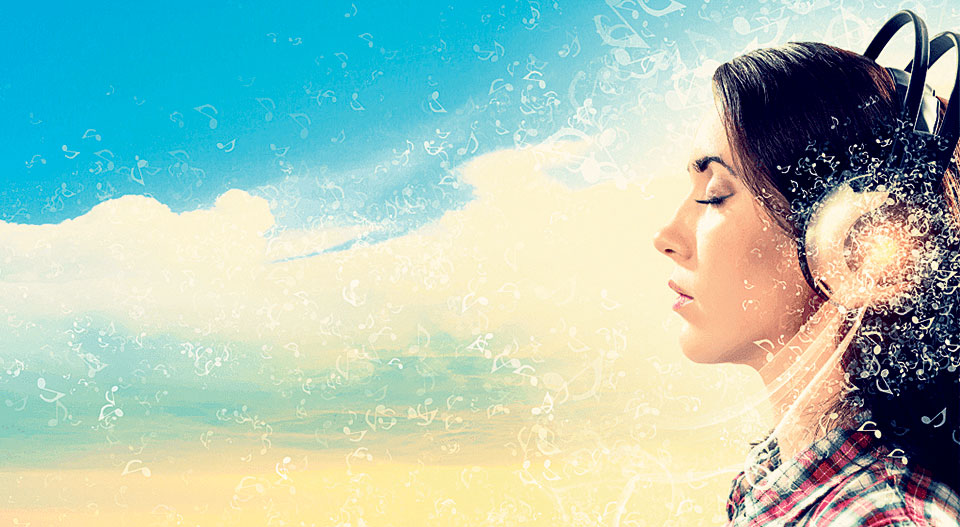 The act of meditation precedes civilization. Our biggest enemy is said to live in our minds and meditation has always been heralded as the single most effective measure to conquer the enemy that lives within. Imagine having a total control over your thoughts and feelings? Life would be so much better, wouldn’t it? Our actions will be dictated by well thought decisions and we can even face an alien invasion without shaming our race’s intellect.

So if meditation has such miraculous effects why isn’t everyone meditating every second just like they are breathing? It’s because meditation has become synonymous to endless hours of sitting idly, forcing your brain to see ‘that’ that doesn’t exist and then looking back with regret at the hour lost that could have been invested for a Friends marathon. But maybe that’s because we’re doing it wrong and maybe it isn’t as complicated as WikiHow details it to be. Maybe (and hopefully) it’s just as simple as walking or just as fun as eating. Here we explore some meditating techniques that range from being innocently ordinary to absolutely outlandish.

Koan meditation
This one might seem downright strange to a lot of people but its essence hits the purpose of meditation bull’s eye. It requires you to make up arbitrary questions that cannot be reasoned with either facts or logic. Koan is an ancient tradition comprising of myths, poems, adages that have transformational abilities. Koan is also a recounting of experiences that lead to spiritual awakening. This technique uses shock, confusion, and often bizarreness to tap into something beyond the mind. Questions you ask yourself should verge on insanity as you mull over why the big bang happened or what a single hand sounds like when clapping.

Gazing meditation
There are too many tales and poems written on the mystique of gazes shared between people that one often wonders whether they really hold the power they claim to do. So much so that intent gazing is apparently a one-focus meditation. Gazing meditation is primarily concentrating at any external single point to let your mind relax as a resounding quiet settles to drive off inner clutter and ephemeral thoughts that burden the brain. This form is said to enhance clarity of voice as we become more in tune with our intuition. You may focus on the central point of a candle’s flame or the tips of a flower’s petal or even just a building. Relax and let peace come to you naturally.

Daily life meditation
Daily life practice meditation also called ‘Samu Work Meditation’ is a Zen tradition that focuses more on the mind than the body. Practice it by indulging in your everyday mundane tasks such as when hand washing clothes or doing the dishes, eating or just walking. Slow down your pace to half of what you usually do and try to take measure of your consciousness. Be mindful of the feel of water on your skin; focus on the muscles of your calves as they contract in each step; feel the texture of the food languorously and absorb in the flavors but take it slowly, observantly. This mindfulness attunes you to your senses and is an excellent meditation strategy.

Labyrinth meditation
Labyrinth has long been an emblem for wholeness. It’s built with elaborate unicursals that make an allowance for a purposeful path but by jarring the observer as they attempt to navigate a path through it. Labyrinth meditation is one form of walking meditation. The trick to labyrinth meditation is to identify a single course that winds its way into the center. While labyrinths aren’t a familiar sight in Nepal drawing them up is always an option. You can use old bed sheets or scraps of paper or take a piece of brick and do it the old way, if you understand the implication. The idea is for you to channel your energy on a single focal point and invest your focus into it as you find your way. It’s fun and you’re meditating. What a bargain!

Fire meditation
While prominent among the Tibetan Buddhist monks, fire meditation was an equally famous practice among warrior-priests. Akin to dances and war chants, fire meditation sends its practitioners into hysteric wildness for a few moments as they shake off their nerves to prepare for challenges and events of utmost importance. Stand with your knees bent slightly and take lungful of breaths in and out. Breathe in and out deeply and sharply through the mouth but keep your throat open. This will make the air hotter and hotter in your stomach. Feel the heat as it rests in the pit of your stomach and climbs down into your limbs. Let the heat burn through the nerves that sit knotted deep into your muscles.

Music meditation
It’s no surprise that meditation by music makes an appearance here. Music has been certified, very long ago, for having soothing effects and thus calming the brain. Intuitive music is composed in a state of “non-thinking” to communicate “non-thinking” to listeners. Musical pieces comprising of only a single instrument are excellent starters for beginners. Visualize the instrument at play and let the notes flow; note the progressions and transitions as you begin and slowly let go of your hold on awareness. Let the music into your consciousness and sub consciousness, let it proceed and recede. You’ll get it once you begin.

The plus points of Pilates 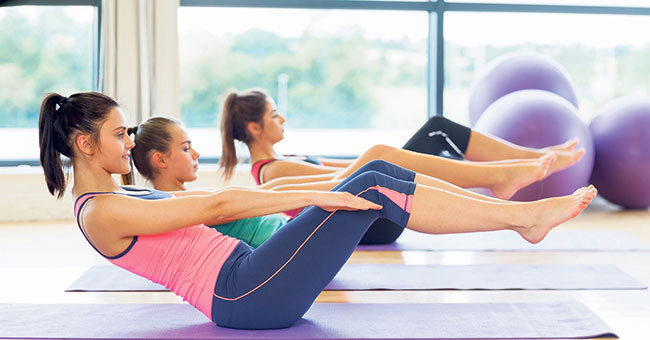 By 2005, over 11 million people identified themselves as ‘practitioners’ of Pilates in just the western hemisphere. And it doesn’t take a genius to guess that the number has multiplied itself a hundredfold in just over a decade. In the recent years, the practice of Pilates has extended its reach to the Eastern region and has had dramatic influence over the exercising populous, and quite more so in the recent days.

So what exactly is Pilates? Pilates, brainchild of Joseph Pilates (a physical trainer from Germany), is a systemized form of exercise that took emergence in the early quarters of the 20th century. Pilates primarily aims to strengthen the core. Core strengthening is essentially exercising the muscles on your midsection for better balance, and good posture that contribute to the overall fitness of the body.

By name, the exercises include the Pilates Curl, a juvenile version of crunches that serves as excellent starters for strengthening the core, the Hundred (imagine a bird taking flight, in reverse), Roll Up (like a nice little chapati), and more. Doesn’t really sound pleasant, does it? Not that the standards of pleasure are very high when it comes to exercises but Pilates sound particularly nasty. But you still see a growing number of people laying their mats on the floor for some Pilates. Here’s why:

Too many Pilates instructors promise that Pilates is the one exercise type that works out your body from the tip of your toenails to the ends of your hair. Really. Unlike most exercises Pilates do not turn a blind eye over some parts, and concentrate at length over some, they work out the body as an integrated whole. Your abdominal muscles, calf muscles, biceps and triceps get the workout of a lifetime. Literally.

You don’t have to be on the wrong side of 30 to experience backaches. It’s a commonality even among the younger crowd these days. A strong core means a stronger back. Pilates allows for light stretches for tight back muscles, teach good alignment, and thus ease the stiffness along the length of your back. The exercises focus on core building since a weaker core is responsible for the all the back pains that is ailing you.

Easy on the joints

Pilates isn’t as rough on you as most exercises are. They comprise of minimal and subtle movements that rarely, if ever, put pressure on the joints. As a matter of fact, Pilates are good reliving exercises for arthritis. The exercises stimulate the production of synovial fluid which then lubricates the joints allowing for smoother movements. Smoother movements loosen up the tension on the joints and help sedate the pain.

Like all good exercises Pilates too helps improve focus. It’s a difficult task for the untamed mind since it requires of you to take careful notice of the sensations in your body as you are coordinating your breathing to your movements. Some liken it to meditation and, frankly, it is a form of meditation in its own rights. Research has shown instances of improved executive functioning of the brain with daily session of Pilates.

If you’ve never been a gymnast in the making, worry not. Pilates bring out the hidden gymnast in you. Flexibility is its forte. Regular sessions of Pilates, evidence has it, improves one’s flexibility by 19.1 percent or more. Inflexibility shortens the muscles which narrow’s the body’s range of motion. Pilates loosens this tightness and makes your body more agile.

Drumroll. This is arguably the single biggest reason people have taken to exercising in recent years. Pilates work miracles on your body fat. A tiny problem is that it does not work overnight like the elves work over the shoes. It works slowly but steadily. It burns calories and tones the muscles and hence gives you a slimmer look. Pilates are muscle builders and, since muscles are metabolically active, the larger your mass of muscles the faster you burn your calories.

The aerobic benefits of Pilates really depend on the intensity of your workout regime. Varying on the exercises your heart rate either quickens or slows down thus building endurance. Cardiovascular fitness is of exceeding importance since it enhances the ability of the lungs and the heart to supply oxygenated blood into the working muscles of the body and so contributes to the overall fitness of the body.

No, it does not work like Skele-Gro. That’s only for Potter-verse. For us, no-majs though Pilates have proven to be very effective in tackling osteoporosis, a condition where bones literally become porous and thus more susceptible to fractures. Done correctly Pilates improve bone density by strengthening muscle mass which can then provide good support to the bones. Balance and posture improvement can very well prevent fractures and proper bone alignment keeps muscles spasms in check.

Ministry doesn’t know how many civil servants have reached provinces

KATHMANDU, Feb 7: At a time when reports coming in from the provinces say that the government employees deputed by the... Read More...

Don’t count on smartphone health apps in an emergency. A review shows many don’t warn when you’re in danger. ... Read More...

The government itself is breaking the law
21 hours ago

Rani Pokhari to be inaugurated today
6 hours ago

How Israel failed its Covid test
6 hours ago

One killed, 14 injured in Dailekh bus accident
21 hours ago