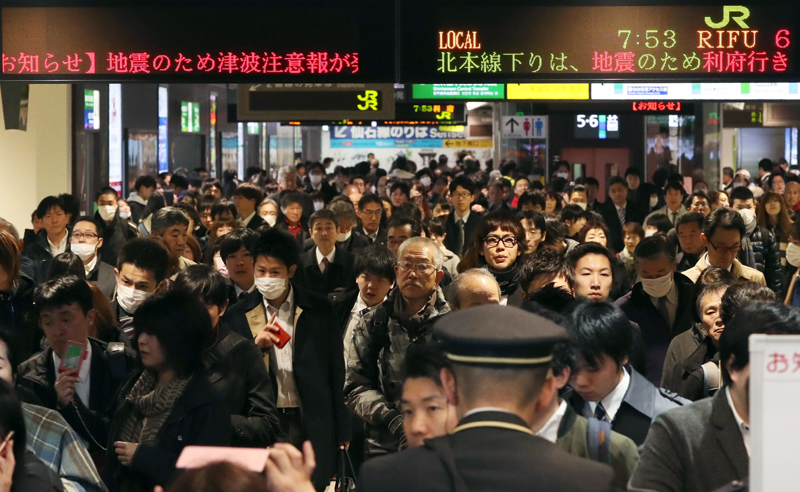 The agency warned that another large quake could hit in the next few days and urged residents to remain cautious for about a week.

Tuesday's magnitude 7.4 quake triggered moderate tsunamis, but nothing high enough to cause major damage. It was the largest earthquake in the northeast Japan region since the 2011 quake and some large aftershocks the same day.

All tsunami warnings and advisories have been lifted in Japan, seven hours after a powerful offshore earthquake triggered a series of moderate tsunami waves.

The Japan Meteorological Agency warned of waves of up to 3 meters (10 feet) soon after the magnitude 7.4 earthquake and urged residents on sections of the Pacific coast to evacuate to higher ground.

The first tsunamis were recorded about one hour later. The largest one of 1.4 meters (4.6 feet) in height reached Sendai Bay about two hours after the earthquake.

The tsunami warnings were lifted first, but advisories of possible smaller tsunamis had remained in place until 12:50 p.m.

The same northeast Japan region was hit by a devastating earthquake and tsunami in 2011.

JAPAN, Sept 10: The death toll from a powerful earthquake in northern Japan last week rose to 44, with 660 injured, the... Read More...