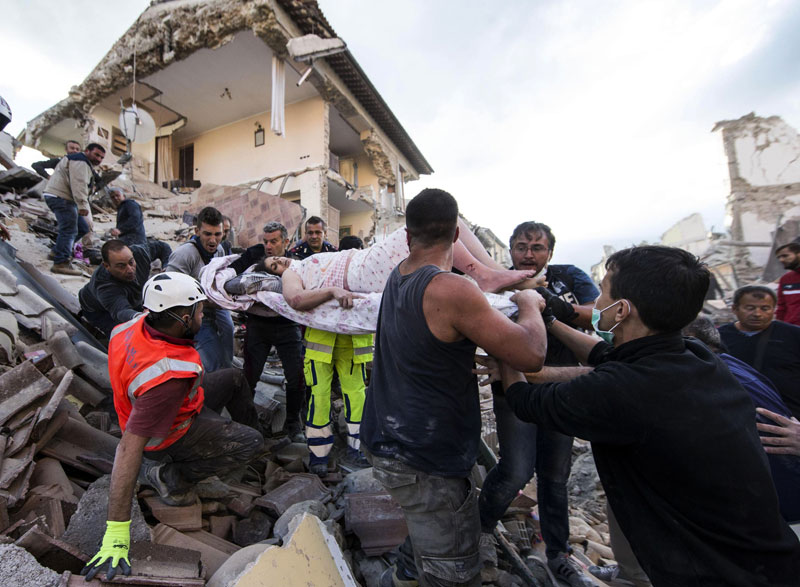 AMATRICE, Italy, Aug 25: The Latest on the earthquake in central Italy (all times local): 6:30 a.m. Italian authorities say that the death toll from Wednesday's earthquake in the central part of the country has risen to 247.

Residents in a central Italian region devastated by an earthquake have been jolted awake by a strong aftershock.

The U.S. Geological Survey put its magnitude at 4.7 with the epicenter about 7 kilometers east of Norcia, with a relatively shallow depth of 10 kilometers (6 miles). The latest temblor struck at about 5:40 am Thursday.

Norcia, which is about 170 kilometers (105 miles) northwest of Rome, was the epicenter of Wednesday morning's 6.2 earthquake that leveled the central Italian towns of Amatrice, Accumoli and Pescara del Tronto, and killed at least 159 people.

Italian rescue workers are expecting fewer casualties than initially feared at the site of a hotel that was badly damaged in Wednesday's earthquake.

Officials initially said about 70 people had been staying at the Hotel Roma in the central Italian town of Amatrice when the quake struck.

But an official with Italy's civil protection agency, Luigi d'Angelo, told Sky TG24 that about 35 people had been staying at the hotel, and most had managed to get out. Carlo Cardinali, a local fire official taking part in the search efforts at the hotel, estimated that about 10 guests were missing.

Five bodies have been pulled from the rubble.

Workers had been forced to suspend their search at the hotel, though overnight searches for earthquake survivors were continuing elsewhere.

Among the victims of an earthquake in Italy was an 18-month-old girl whose mother survived the deadly earthquake of 2009 in nearby L'Aquila and moved away from there after that terrible experience.

The news agency ANSA reported that the toddler, Marisol Piermarini, was sleeping in her bed in the family's vacation home in Arquata del Tronto when the quake struck early Wednesday.

Her mother, Martina Turco, survived the earthquake that struck L'Aquila, killing more than 300 people. Now she is being treated in a hospital after being pulled from the rubble as the family mourns the death of the little girl.

Death toll in Afghan base attack rises to 140, officials say

MAZAR-I-SHARIF/KABUL, April 22: As many as 140 Afghan soldiers were killed on Friday by Taliban attackers apparently disguised in military uniforms... Read More...