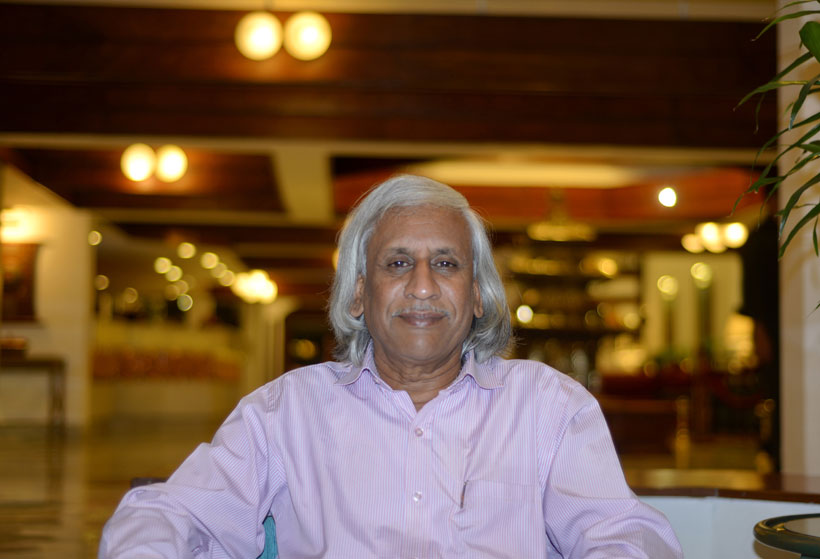 He can’t stress enough about the harmful effects of lead on the human body and has been working relentlessly to raise awareness on this issue for more than a decade now.

Professor Thuppil Venkatesh is associated with different organizations working against lead poisoning in some 50 countries. He heads the Indian Society for Lead Awareness and Research (ISLAR), and is also the principal advisor to Quality Council of India.

He confess that even he didn’t know much about blood lead level till he was approached by Dr Abraham George of The George Foundation, a non-profit organization based in Bangalore, India, in 2000. When they screened 23000 people in seven metros in India that year, the results were shocking – 53 percent of the people had lead poisoning.

“In the United States, blood lead level testing started in 1975. In India, many still don’t know their blood lead levels and the case is the same in Nepal,” said Prof Venkatesh, when he was in Kathmandu recently to speak about the benefits of accreditation to clinicians as well as the common man at a program hosted by Samyak Diagnostics, the first ever ISO 15189:2012 certified pathology laboratory in Nepal.

Cilla Khatry spoke to Prof Venkatesh, popularly known as ‘The Lead Man of India’, to talk about lead poisoning and the dire need for awareness about this health hazard.

What are some of the harmful effects of lead in the human body?
Lead is toxic in any form and there are three ways in which it can enter the human body: respiratory, digestive, and through the skin. Exposure to lead could be through contaminated air, water, soil, food, and consumer products. Children are especially vulnerable to lead poisoning, which can severely affect mental and physical development. In the bloodstream, lead can damage red blood cells and limit their ability to carry oxygen to organs and tissues thus causing anemia. Even small amounts of lead can cause serious health problems. At very high levels, lead poisoning can be extremely toxic and even fatal.

Can you explain what you mean by ‘lead poisoning’?
Lead poisoning occurs when there is a build up of lead in the body. This often happens over a period of months or even years when you come in contact with items containing lead. High levels of lead in the body interfere with a variety of body processes and harm many organs and tissues, including the heart, kidneys, bones, etc. The worrying fact is that not many people are aware of lead poisoning. Children are especially vulnerable to lead poisoning that could come through the mother’s milk if the mother’s blood lead level is high. When lead goes to the developing brain, children’s IQ is reduced. A single unit increase above the permissible level of 10 micrograms per deciliter (<10µg/dL) decreases a child’s IQ by 7.4 points.

How can we keep ourselves safe from this toxic metal?
There is lead in almost everything around us. There is lead in petrol. It is used in arms and ammunitions, batteries, cosmetics, and paint, to name a few. A lot of youngsters color their hair these days. There is lead in the dye that, through your skin, goes to your kidneys and, in the long term, will cause irreparable damage. Awareness, I believe, is the key in making a society ‘lead safe’. Make people aware about lead poisoning and tell them what has lead in it and they will keep away from it.

What do you mean by a ‘lead safe’ society?
Lead is a highly toxic metal that has no known beneficial biological function but on average, a human being uses nearly half a ton of lead in his/her lifetime. This in the form of things like energy-storing lead acid batteries, petrol, paint, and even shiny shirt buttons. There is lead even in spices like turmeric and that silver foil that sweets are coated with. We need to acquaint ourselves with where lead is found and take measures to stay lead-safe. When you buy turmeric, opt for the good quality ones even if they are a little expensive or try to get it freshly grinded like our mothers and grandmothers did. Don’t use newspaper to wrap your food. Not using hair dye and store bought kohl is being lead safe.

How can lead poisoning be detected and what are the treatments available?
Lead poisoning can be detected through a simple blood test. Blood lead level of less than 10µg/dL is the appropriate level of lead in the body. Many people don’t show any symptoms of lead poisoning unless the blood lead levels are very high. Though there is treatment for lead poisoning, it is expensive and thus unaffordable for many especially in developing countries. Also every treatment comes with its fair share of side effects so the best possible thing to do would be to prevent lead poisoning. Awareness is of paramount importance. It would solve 50% of the problem.

What can be done to minimize the risk of lead poisoning?
I have been working to bring about awareness about this issue in many countries and what I find appalling is that, in many developing nations, there is no established recommendation for lead level in food or blood. In India, even today, there is lead is paint, traditional medicines, and even bottled water and toys. For Nepal, that imports most of the goods, I recommend checking what you bring in your country and simply not accepting toxic products. Also, there should be mandatory monitoring for people working with lead. There is also a need for an awareness campaign across the country on lead-related issues, especially at the school level. Facilities to test and monitor blood lead level would be a good place to start.

So, what has lead?

Paint
Lead was used in paint to add color, improve the ability of the paint to hide the surface it covers, and to make it last longer. Lead-based paint becomes a concern when it chips, turns into dust, or gets into the soil.

Dust
Lead dust is the most common way that people are exposed to lead. Inside the home, most lead dust comes from chipping and flaking paint or when paint is scraped, sanded, or disturbed during home remodeling. Lead dust may not be visible to the naked eye.

Lead seldom occurs naturally in water supplies like rivers and lakes. Lead enters drinking water primarily as a result of the corrosion, or wearing away, of materials containing lead in the water distribution system and household or building plumbing.

Traditional herbal preparations contain herbs, minerals, and metals including lead. Some cosmetics such as Kohl (Alkohl) and Surma also contain lead. Most lipsticks and hair dyes are also known to have lead.

Lead may get into foods or liquids that have been stored in ceramics, pottery, china, or crystal with lead in it. Lead can be found in candy, wrappers, and pottery containers.