The development of modern and contemporary art in Nepal 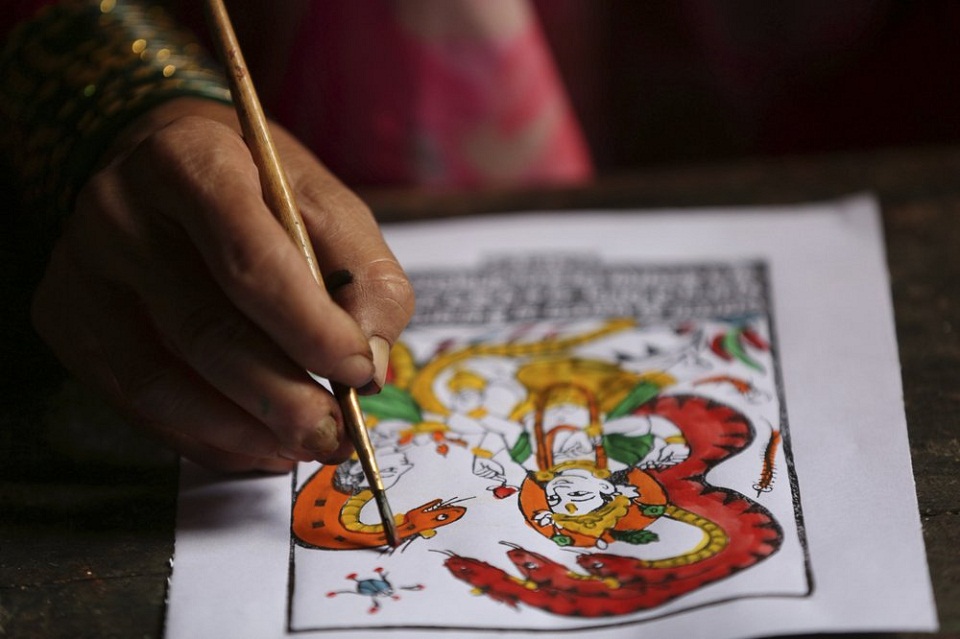 The author is a Nepali Sculptor Artist based in the United States.
news@myrepublica.com

The Nepali art is believed to have started from the Nepal Valley which is now called the Kathmandu Valley. Ancient Nepal used to be a land-linked prosperous country, a prime locale between India and China, bridging and uniting diverse peoples. Travel and mercantile relations brought about an inter-penetration of philosophies and traditions, adding a new dimension to the Nepali culture and vice versa.

The mid-19th century saw the shift from religious to secular arts, particularly with the rise of the Shahs and Ranas. Nepal’s political isolation from 1846-1950 during the Rana autocracy resulted in the development of European-derived art, with grand-scale oil portraiture and courtly life of the Ranas.

Artists still belonged to the painter caste group among the Newars - the Chitrakars; Dirghaman Chitrakar traveled to Europe with the Rana prime ministers to gain a first-hand understanding of European aesthetics, academic styles, and realism.

In the mid-20th century, the art scene ushered the definitive beginning of contemporary and modern art, thanks mainly to two influential Nepali artists - Chandra Man Singh Maskey and Tej Bahadur Chitrakar who had studied in India in the early 1920s. Their modernist tendencies are most evident in their introduction to a new genre of the subject. Interestingly enough, these two men were born in the same year. Both received their education at the same school and together brought the influence of the Bengali School of Art with them to Nepal. Therefore, they were the first officially-recognized master teachers of modernism and contemporary subjects in Nepal.

After the end of the autocratic Rana regime in 1951 AD, the country, under the liberal rule of king Tribhuvan, for the first time opened itself up to outsiders coming in and modern ideas reached Nepal from all over the world. In the initial years of this opening, a kind of general euphoria prevailed in the country at the new freedoms - better education, opportunities.

The development of art in Nepal since the mid-1960 has been surprising. Because this was the time when some abstract paintings came to Nepal from Europe

In 1964, NAFA (Nepal Association of Fine Arts) under the auspices of the Royal Nepal Academy was formally established to create a platform for annual exhibitions of contemporary art, and the first contemporary art museum was also instituted. Several art schools were also established, among them Lalit Kala Academy and Sirjana Fine Arts School are the most prominent. Despite these initiatives by the government, contemporary art was still viewed as an intellectual academic pursuit, focusing on the aspects of technique, aesthetics, and experimentation by individual artists, rather than as a collective effort. Private institutions, primarily art galleries such as Siddhartha Art Gallery, Nepal Art Council, and Park Gallery provided spaces for exhibitions, and exposure to international shows.

During that time, Lain Singh Bangdel was one of the master teachers in art. In 1979, under the leadership of King Birendra, Bangdel became the director of the academy. He had completed his art education from Calcutta (now Kolkata), India. Later, he widened his knowledge in London and, above all, Paris, where he came into contact with modern Europe and contemporary art, particularly cubism and abstract.

This experience led to the ripening of the idea of initiating a school of modern abstract art in Kathmandu, Nepal.

In 1960-61, after the return of Lain Singh Bangdel to Nepal from Europe, the development of modern art took a new turn and for the first time in the country, an exhibition of modern and figurative painting was held.

Bangdel was the first Nepali artist to introduce the trends of modernism to Nepal. His artistic experimentation and innovation, specifically abstraction, embodied a deeply personal expression of the artist’s inner self for the second generation of artists.

By 1980, successful female artists were also active in Nepal with feminine experiences. The art produced by contemporary Nepali women artists expressed forcefully a shift from simply the aesthetically-derived works toward a perception of the world centering around their gendered identities. It is within this context of the third generation of contemporary Nepali artists that a new movement toward experimentation, social engagement, and a socially conscious art practice started.

Even after Nepal became a Republic in 2008, the contemporary artists agree that the Nepal Academy continues to function in the same conservative ways that Royal Nepal Academy did as early as two decades ago.

Will Kathmandu Vote for Balen Shah?

Para-Athletes and the Status Quo of Nepali Sports

Despite there being an organization for the advocacy of para-athletes, the status quo of para-sports remains to be the same... Read More...

Will Netflix/YouTube Apply for license to operate in Nepal?

With the government amending the National Broadcasting Regulation 1995 recently, a key question has arisen - will foreign companies providing... Read More...