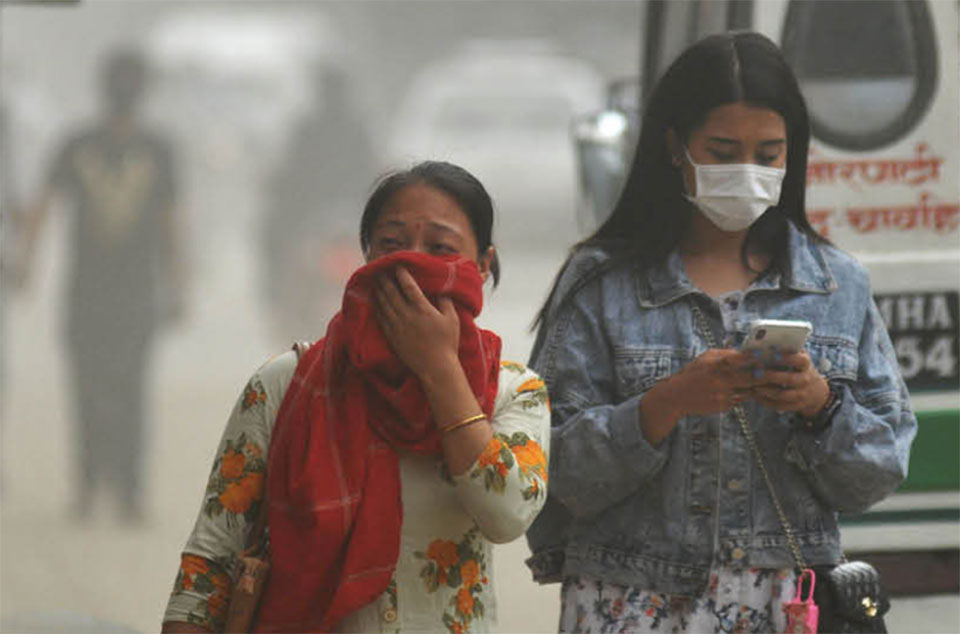 When Raunak Jha first came to Kathmandu for his +2 about a year ago, he was shocked to see how dirty the city was. Jha, who is from Sarlahi, mentions that he had heard people complaining about the pollution in the capital but he didn’t realize how severe this problem was before seeing it for himself. And now that his initial excitement over living in Kathmandu has died down, he can’t get over his irritation with the massive unmanaged waste problem in the city.

Like Jha, people living in Kathmandu have different things that annoy them about the city. Although these issues people speak about can be cast aside as minor complications that everyone living in large cities have to deal with, when these add up, we can actually see how seriously all of these seemingly small problems are affecting our daily lives.

Jenny Sherpa’s complaint is similar to Jha’s. In her opinion Kathmandu is too dusty and, as communities, we don’t clean our spaces as much as we should. The roads are too grubby with garbage dumps in almost every street and even the people who inhabit roadside buildings or have shops or offices there don’t clean their surroundings regularly.

“Something else that annoys me to no extent when I’m out in Kathmandu is how the clothes I wear – especially the light-colored ones – get dirty in the span of an hour,” says Sherpa who is a big fashion enthusiast. For this too, she blames the perpetually dusty streets of Kathmandu and adds that wearing heels is an ordeal as most sidewalks in the city are unpaved and uneven.

Entrepreneur Babin Gurung is on the same page as Sherpa and says that shoes don’t last in the city because one has to walk on extremely bad roads. Also, since most roads get muddy after a spell of rain, he claims all his shoes are dirty and damaged.

Dirt and dust aren’t the only issues people living in Kathmandu have with the city. Another issue that multiple people mentioned to this scribe about Kathmandu was regarding commute.

Sejol Pradhan, media studies student at Kathmandu University, states that the public vehicles that run around the city get really packed, especially during the start and end of office hours. “The tricky thing is neither the driver and driving assistant nor the passengers can be completely blamed for this as they’re forced to operate this way because of the system,” says Pradhan. She further claims that bikes passing through small or crowded alleyways bother her too as these places as it is have barely enough space for people to walk through without pushing one another.

Similarly, dentist Shahita Singh mentions that many streets in Kathmandu don’t even have proper pavements. Because of this, people have to use the main road, where vehicles run, and this increases chances of accidents.

Although related to commute, Ashutosh Dahal’s complaint is a little different. He claims that seeing people being mean and rude, especially when you are all traveling in the same bus, dampens his spirits ever so often.

Furthermore, Ronee Pariyar, front desk officer at IEC College, reveals that her biggest qualm regarding Kathmandu is how unmanaged the city’s electrical wires are. She states that after hearing about a number of deaths that have taken place in the last few years due to electrocution, she’s always scared about a stray wire accidentally electrocuting her whenever she is out.

What’s worse is that Pariyar frequently sees people in the Naxal/Nag Pokhari area hanging their clothes out to dry on these wires. The electrical wires, in many cases, almost touch or go right over the roadside houses in Naxal and in many places of the city and most people living at these places can touch these wires from their balconies or rooftops. “That’s just so scary and dangerous,” she says.

What can be done
People this scribe spoke to believed that most of these problems have really simply solutions. Responsible authorities taking action and getting their jobs done can fix a lot of these issues. If Kathmandu can go on a cleanup campaign whenever there are state visits, people seem to believe there is no reason why it can’t be done on a regular basis to maintain the city.

Something as basic as paving unpaved roads can solve a lot of the city’s dust and dirt problem, they claim.

“The government should really focus on road construction,” says Singh adding that proper sidewalks and overhead bridges should also be built wherever they are required.

Pariyar, on the other hand, suggests the government should work on getting the wires underground. She claims they are demolishing the roads time and again anyway, and that they could begin the underground wiring project while they are at it.

Likewise, Pradhan thinks increasing the number of large buses – like Sajha Yatayat – that travel long distances could also better the condition of the city roads. Right now, small vehicles trying to squeeze their way through the lanes make Kathmandu roads seem even more chaotic than it is, she says.

Sherpa agrees with Pradhan’s sentiments about increasing the number of public vehicles as she thinks this will encourage more people to take the public transportation instead of driving their personal vehicle and that, in turn, will decrease air pollution to a certain extent.

However, besides what the government can do to solve these problems, there also seemed to be a unanimous opinion that people needed to be more self-aware and do whatever they could to not cause inconvenience to others.

Dahal says that people could start by being nicer to one another. The problem is we as humans always think we are right and don’t even realize we are being mean and making things difficult while asserting ourselves, he says.

Pradhan further adds it all boils down to each individual being a little considerate and doing their bit to alleviate problems rather than just complaining about them. “I think more people need to think about how their selfish actions can disrupt the lives of people around them. That can be the start to bringing about some much-needed change,” she concludes.

KATHMANDU, Jan 21: While air pollution in India's capital city has received worldwide attention, little has been said and done about... Read More...

Trump impeachment goes to Senate, testing his sway over GOP
7 minutes ago