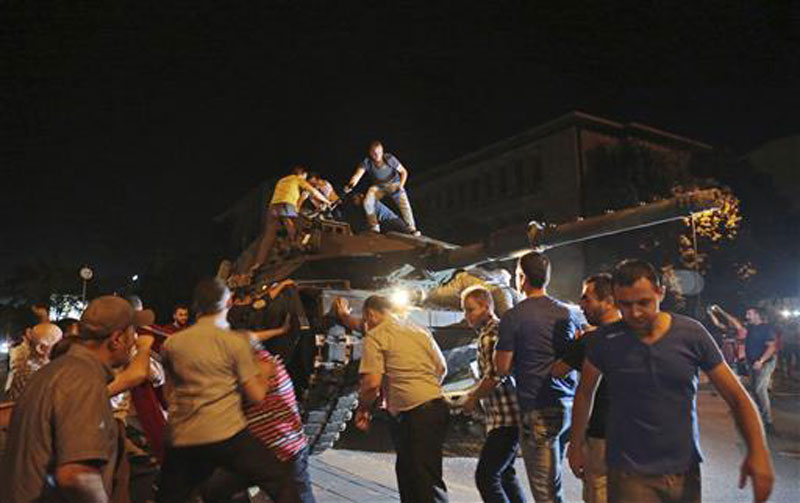 ANKARA, Turkey, July 16: The Latest on what appears to be an attempted military coup in Turkey (all times local):

NTV television is quoting the prosecutor's office in Ankara saying at least 42 people have been killed in "attacks" in the capital.

According to Prime Minister Binali Yildirim, the number of soldiers who were arrested in the coup plot has increased to 130.

Prime Minister Binali Yildirim, speaking to state-run Anadolu Agency, says more than 120 people have been arrested in a coup plot.

He says: "Things are getting better every minute."

Yildirim called on people to remain in the streets to support the government against coup plotters and appealed for patience.

He says a few air force planes flown by coup plotters still remain in the air. He has earlier ordered those aircraft shot down.

A lawyer for the Turkish government, Robert Amsterdam, said that "there are indications of direct involvement" in the coup attempt of Fethullah Gulen, a Muslim cleric who is living in exile in Pennsylvania. He said he and his firm "have attempted repeatedly to warn the U.S. government of the threat posed" by Gulen and his movement. According to Turkish intelligence sources, he said, "there are signs that Gulen is working closely with certain members of military leadership against the elected civilian government."

The president of a group that promotes Gulen's ideas, the New York-based Alliance for Shared Values, denied the charges. Y. Alp Aslandogan told The Associated Press "we categorically deny such accusations and find them to be highly irresponsible." Earlier in the evening, the alliance said, "we condemn any military intervention in (the) domestic politics of Turkey."

Some background on Gulen:

WHO IS FETHULLAH GULEN?

Trained as an imam, or prayer leader, Fethullah Gulen gained notice in Turkey some 50 years ago, promoting a philosophy that blended a mystical form of Islam with staunch advocacy of democracy, education, science and interfaith dialogue. Supporters started 1,000 schools in more than 100 countries, including about 150 taxpayer-funded charter schools throughout the U.S. In Turkey, they have run universities, hospitals, charities, a bank and a large media empire with newspapers and radio and TV stations.

Turkish President Recip Tayyip Erdogan has long accused Gulen of plotting to overthrow the officially secular government from a gated 26-acre compound in Pennsylvania's Pocono Mountains. Gulen is rarely seen in public and has been put on trial in absentia at least three times.

WHY NOT DEPORT HIM?

The U.S. has shown little inclination to send Gulen back to Turkey. The Justice Department has declined to comment on Gulen's case. In an interview with the AP early this year, Aslandogan, of the Alliance for Shared Values, said: "(Gulen) said that the United States has a long tradition of democracy and rule of law. ... They will see that these are politically oriented charges, and they will not allow Erdogan to spread his ambition into the United States."

WHAT'S THE STATUS OF LEGAL CLAIMS AGAINST GULEN IN THE U.S.?

Last month, a lawyer representing the Turkish government said he would continue exposing Gulen's "unlawful conduct" one day after a federal judge in Scranton, Pennsylvania, dismissed his lawsuit against the cleric. "Despite the outcome of this ruling, a very clear message has been sent to Gulen and his co-conspirators in the Poconos: the days of impunity are numbered, and your unlawful conduct will be brought to light," lawyer Robert Amsterdam said. The suit contended Gulen ordered sympathetic police, prosecutors and judges in Turkey to target members of a rival spiritual movement critical of his teachings. U.S. District Judge Robert Mariani ruled the claims did not belong in U.S. courts.

WHAT ABOUT THE SCHOOLS?

Some of the U.S. schools have been investigated by the FBI amid allegations of financial mismanagement and visa fraud. One of the most explosive claims is that the schools are importing Turkish teachers to identify impressionable students and indoctrinate them into Gulen's movement, sometimes called Hizmet, Turkish for "service." In May, a complaint filed with Texas education officials accused a network of charter schools associated with the Gulen movement of abusing a visa program to import large numbers of Turkish teachers and violating state and federal laws by paying them more than American teachers.

The complaint also asserted that the network, Harmony Public Schools, skirts competitive bidding rules to award contracts to Turkish vendors. Harmony has denounced the complaint as politically motivated and without merit.

WHAT'S THE RESPONSE TO THE LATEST ALLEGATIONS?

In a statement Friday, the Alliance for Shared Values said: "For more than 40 years, Fethullah Gulen and Hizmet participants have advocated for, and demonstrated their commitment to, peace and democracy. We have consistently denounced military interventions in domestic politics. These are core values of Hizmet participants. We condemn any military intervention in domestic politics ofTurkey. Events on the ground are moving quickly and it would be irresponsible for us to speculate on them. We remain concerned about the safety and security of Turkish citizens and those in Turkeyright now. Comments by pro-Erdogan circles about the movement are highly irresponsible."

An AP reporter was given a tour of Gulen's Pennsylvania compound this year but was unable to see or interview him. He spends hours a day in prayer and meditation and goes out rarely, mostly to see doctors for ailments that include heart disease and diabetes, according to Aslandogan. Gulen's living quarters are lined with books on shelves that also hold jars filled with soil from various regions of Turkey.

CHITWAN, April 30: A woman was killed while a man was injured in two separate incidents of rhino attack in Chitwan... Read More...

35 killed by attacks from elephants in 17 yrs

BARIDYA, Dec 3: A total of 35 people had lost their lives to attacks from elephants in the past 17... Read More...