The city of Silence 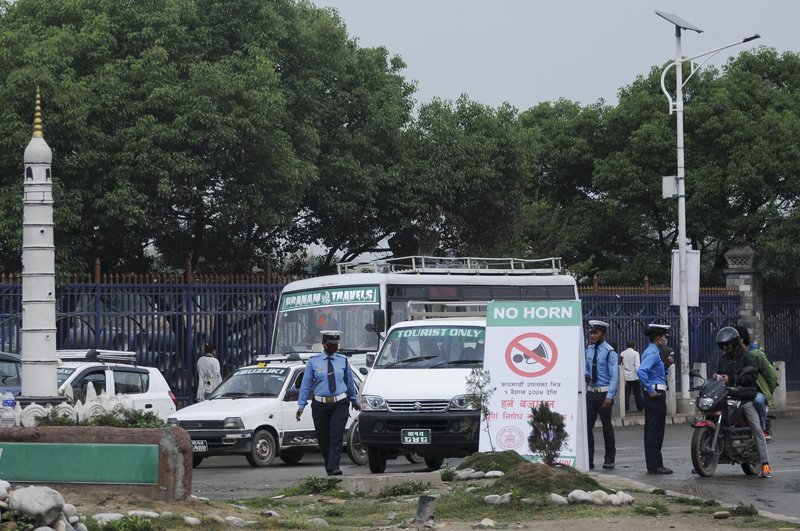 On the day the no-horn campaign came into effect, 18-year-old Shreya KC missed two of her morning classes at college. The usually up by 5:00 am girl had overslept till 7:30 am missing an important test. She didn’t normally set her alarm because, at her roadside home in Kalanki, the noises of the streets roused her every morning, without fail.

“The big buses would start blaring their horns around 4:30 in the morning and the noise has been waking me up for as long as I can remember,” says KC, who can’t recall the last time she had slept so soundly. “Even on Saturdays, when I don’t have to go to college and would ideally like to sleep in, I’m up by 6:00 am at the latest because you can’t sleep with all that noise,” she says. And the condition only got progressively worse after nine in the morning when cars, buses, and two-wheelers were packed bumper to bumper.

Pressure horns, used mostly by large vehicles like trucks and buses, was one of the leading causes of noise pollution in the valley producing sounds of 120 decibels whereas a regular horn produced only 70-80 decibels. The ill effects of noise pollution had been repeatedly talked about but, in the lack of rules and regulations, nothing much had been done about it.

The deputy director of Kathmandu Metropolitan City (KMC) Office, Hari Bahadur Kunwar, says that though they had been talking about tacking the issue of rising noise pollution in the city, because they hadn’t quite figured out who would take charge of the campaign it took a while to kick off.

“Ultimately we just decided to work together and impose the ban. The Metropolitan Traffic Police Department (MTPD), Nepal Police, and KMC are currently working on it hand-in-hand,” says Sharma. According to him, it was the way microbuses and minibuses competed with one another on the roads all the while honking away that compelled them to take this ‘drastic’ measure.

“Many people might not agree that a ban is a solution to the problem but we haven’t actually completely banned horns. You can use your vehicle’s horn in emergency situations, to avoid a collision, and at turning points,” he says. However, he also says that many people might not be aware of the extent of the ban and, because habits diet hard, might still be using horns with reckless abandon.

In this case, the MTPD retains the right to book offender and levy fines. Currently, offenders will be fined Rs 500. But the MTPD is working on a system where first time offenders will be fined Rs 500, whereas if you break the rule second time around, the fine will be doubled and it will keep increasing by Rs 500 every time you violate a traffic rule.

“But the implementation of this rule is far from easy,” says traffic police S K Pal who is currently stationed at Jawalakhel. Pal says that vehicle drivers, especially motorbike riders, still use the horn quite frequently when they don’t see traffic personnel around.
“There have been many motorbike riders who have honked the moment they are 10 meters away from me. I can see them, I can hear them, but I can’t be running around trying to catch them, can I?” says Pal adding that only rules and regulations can’t address this issue and that there needs to be a change in the mindset of people.

Keepa Thapa, employee at German Bakery and a resident of Jawalakhel, agrees with Pal and says that since the ban has been enforced the main roads are relatively noiseless, but in the inner alleys bike riders and even microbuses are still as careless with horns. But the good thing is that, Keepa mentions, people are becoming conscious riders and drivers.

“The no-horn campaign is finally getting people to look at their side and rear view mirrors,” she says. There seems to be no other option because you can’t horn to let other vehicles know you are coming and have to be mindful about your own road behavior. Deputy director Sharma too feels that the no-horn campaign will not only lessen noise pollution in the valley but also instill some good civic sense in people.

“Earlier people would use their vehicles horns the moment the car or bus in front of them stalled for five seconds. They didn’t stop to think that nobody wants to wait on the road and that everybody is headed somewhere, just like them. They would simply express their frustration by pressing on the horn,” says Sharma. Now, he says, not only will they have to be cautious and adhere to traffic rules, but they will also have to be kind and show some basic road manners.

For Keshav Poudel, resident of Sinamangal, Sharma’s words couldn’t be truer. He confesses that he was prone to road rage but now the traffic doesn’t infuriate him so much. Yes, there have been times when he has been caught off guard by a biker overtaking from the left or a van suddenly switching lanes but he doesn’t feel the need to scream or hit his dashboard in frustration. “It has made me a better person while on the road. I think I’m more considerate now,” he says.

However, on the flip side, some people also seem to have taken this as an opportunity to misbehave on the roads. Incidents of bike riders screaming and bellowing at people crossing the road, and microbus conductors whistling and catcalling are aplenty. But then, even those who have been on the receiving end of such horrifying incidents said that it was a small price to pay for how peaceful walking around the city finally feels.

Lokendra Bahadur Malla, spokesperson at MTPD, says that, in just six day of the ban, 1300 people have been booked for violating this new rule. However, he mentions that the MTPD knows about the loopholes in the enforcement of the rule. MTPD is working on awareness campaigns for the public as well as other aspects of traffic management that will make it easier for people to abide by the no-horn rule.

According to Malla, many bike riders complain about jaywalkers and the bad infrastructure of the city, which is why many people don’t use footpaths, and cite those as reasons why they often feel the need to blare horns. “We are working on making people aware about the need to use overhead bridges and zebra crossings as well as trying to better the infrastructure too,” he says.

While the authorities work out the glitches, there is no denying that the no-horn campaign has been quite effective in reducing noise pollution. How this campaign will progress depends largely on public support and, by the looks of it, barring a few (and there will always be exceptions), that probably won’t be an issue.

Kathmandu Valley alone witnessed 57.86 percent of total COVID-19 cases recorded across Nepal in the past 24 hours
22 hours ago
Former finance minister Khatiwada appointed as Nepal’s envoy to the US
3 hours ago

Photos: Pinnacle installed at top of Bal Gopaleshwar Temple at Ranipokhari
33 minutes ago
Four killed, 10 hospitalized in forest fires in eastern Ukraine
2 hours ago
Former finance minister Khatiwada appointed as Nepal’s envoy to the US
3 hours ago