The allure of Nepali books 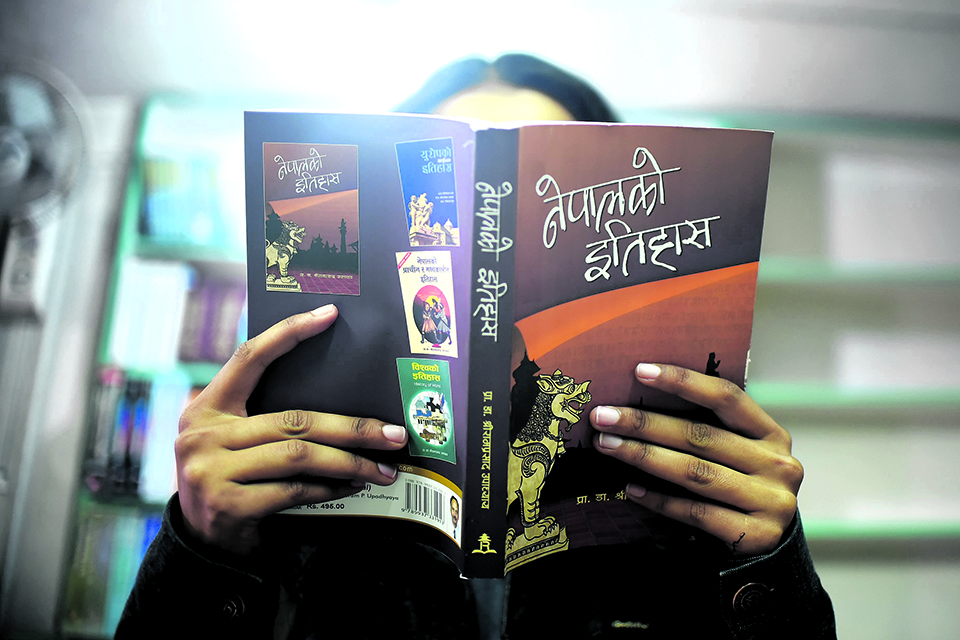 Literature has always been part of Nepali culture. Nepali authors and poets are revered, awarded and hold a respectable position in the society. From Bal Krishna Sama to Parijat, Nepali writers have used literature as a medium to portray as well as critique the behavior of our society and the humanity in general. Works of writers, both past and present, can act as a window to the workings of the society as well. But with our school and college curriculum giving priority to English, it’s debatable whether or not the younger generation is reading as well as showing an interest in Nepali literature.

Sulov Khadka, an 18-year-old student from Budhanilkantha School, has never read Nepali literature in his life. Whenever he chooses to read, he opts for foreign writers. “I don’t find Nepali literature relatable. It’s either too romanticized or too depressing and, as a teenager, it just doesn’t appeal to me,” he says. Khadka also recalls that books written in English were the ones that circled around his friends and no one thought of picking up a book written in Nepali. “I also find the writing a bit too complicated and I have to force myself to get through a single page,” he adds.

However, this is not to say that Nepali youths are not interested in reading books written in Nepali and by Nepali authors. Saijan Maskey, CEO of publication at Nepalaya, says that their online database shows that youths are indeed buying Nepali books. “Rather than books from genres like self help, history or politics, books on romance and life are mostly preferred by the younger crowd,” she says adding that younger audiences prefer books like ‘Palpasa Cafe’ and ‘Khalanga ma Hamala’ rather than opting for say, ‘Lost in Transition’ or ‘Jeevan Jiune Kaida’.

A lot of young people also buy Nepali books from Ratna Pustak Bhandar at Maitighar in Kathmandu. The readers are mostly in their teens or early twenties. Apparently, their interest in generally limited to new titles and romance while books by B.P. Koirala or Lakshmi Prasad Devkota are preferred by the older generations. “We have a lot of buyers who have just finished their SLC or +2 and are looking for something light and fresh in Nepali literature,” says Shyam Tandukar, staff at the bookstore.

Their bestselling books include books by Subin Bhattrai like ‘Monsoon’, ‘Summer love’ and ‘Saya’. Recently, books like ‘Seto Scarf’ by Sabita Shrestha and ‘Kasur’ by Umalal Acharya are also quite popular among the young crowd. “The number of young readers have increased in the recent years, thanks to the internet, as they can read about the books and buy or order them online,” he says.

Smriti Phuyal, a 21-year-old medical student at Manipal Medical College in Pokhara, claims to have given Nepali literature her fair share of attention. Her favorites include ‘Seto Dharti’ and ‘Karodau Kasturi’, both by Amar Neupane, and ‘Babu Aama ra Chora’ by B.P. Koirala to name few. ‘Babu Ama ra Chora’ especially made an impression on her as it has a lot of shocking twists and a subtle yet powerful suspense to it. “Most Nepali books I’ve liked always have had a good storyline and the story flows in real life, rather than in a character’s mind like in many other Nepali books that I’ve picked up,” she reveals.

However, she says she has rarely seen her friends reading Nepali books. “Most Nepali books that receive positive reviews are too bleak and the ones that gain popularity are too superficial. There is no in between for us readers who want a mix of both or perhaps something more complex that just the concept of love or poverty,” she explains adding that Nepali literature lacks diversity in content.

Junu Bhattarai, a 28-year-old Nepali literature enthusiast, agrees with Phuyal when it comes to lack of diversity in Nepali literature. “A book written in English does not necessarily have to be written by English speaking writers. Books written by Russian, French or German writers are translated to English, that too by extremely competent translators,” she says adding that the same can’t be said when it comes to Nepali language. Bhattarai adds that the emphasis put on English by schools also diverts the reading interests of young Nepali bibliophiles towards the language they are used to, especially when it comes to reading.

“If someone doesn’t read Nepali books, they are missing out on really good literature. They are extremely reflective of our culture and the language itself is spectacular,” she says. Among her gigantic collection of Nepali literature, ‘Pagal Basti’ by Saru Bista is her all time favorite and she also liked ‘Yogmaya’ by Neelam Karki Niharika. According to Bhattarai, the thing she loves the most about Nepali books is how relatable they are, in the sense that it can give a detailed perspective as well as a different angle to things and incidents that are particular to Nepal.

Kathalaya is a publishing house based in Lalitpur that specializes in promoting children’s literature primarily written by Nepali writers in Nepali. According to Bibash Shrestha, marketing manager at Kathalaya, in the recent years they have seen an increase in the number of parents buying Nepali books for their children. Parents often visit their bookstore and take time selecting the books. “Many parents have become aware about the need to get their children interested in Nepali literature from a young age,” he says adding that, hopefully, in a few decades this might get the youths more excited about Nepali books.

Both Bhattarai and Maskey say that the reading scene among Nepali youths isn’t as bad as one would think. “Nepali novels are referenced and recommended in several schools and children can pick up a reading habit from there as well,” Maskey says. However, both agree that there are limited genres of books that are preferred by the young audience.

Phuyal says that one way to increase the interest of younger people in Nepali literature is by giving them books with themes other than the Maoist insurgency or the simple Nepali life and including genres like fantasy, science fiction, or maybe even a coming-of-age story. “If I found a Nepali book with simple writing and something along the lines of mystery, fantasy or thriller, perhaps a story about a Nepali ‘James Bond’, I would definitely read it,” she concludes.

Our picks: The best of 21st century’s non-fiction

Most stories are highly imaginative and thus able to conjure things that are beyond the natural world. And that, of... Read More...

Padhantey is an online bookstore that was launched in early May this year. Currently, the store is completely Instagram based... Read More...

Holidaying with books, movies and podcasts

Here is a tight list of inspirational movies, insightful books and entertaining podcasts to make your indoor stay as productive... Read More...