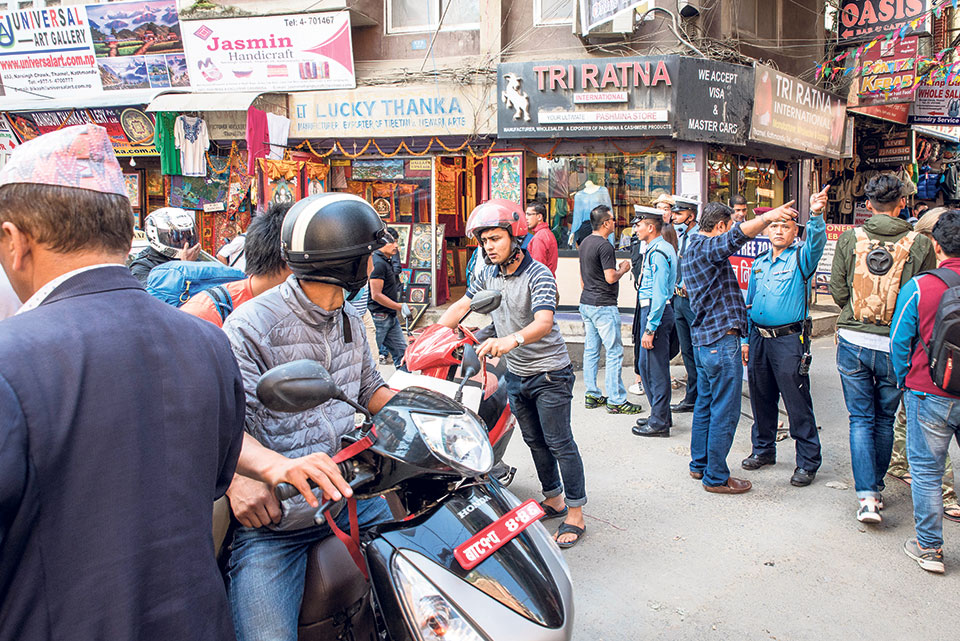 KATHMANDU, Dec 25: Thamel - the popular tourist district of Kathmandu - is transforming. It now boasts of better roads and good sanitation facilities. Also, the decision to declare it a no-vehicle zone has worked wonders.

According to Thamel Tourism Development Council (TTDC), almost 90 percent works related to infrastructure development have completed so far. “Declaring Thamel as a vehicle-free zone was a first step toward developing Thamel into a peaceful tourism hub. Both locals and foreign tourists have benefited from pollution free and peaceful environment in Thamel,” he added.

Works related to paving roads, building drainage and laying pipeline for drinking water have already been completed in Thamel area. “We home to complete the remaining works in two to three months,” he said, added: “Work of building drainage in Saat Ghumti and Amrit Marga area is about to begin. Tender process was delayed because of the election. But it will start soon.”

Drainage maintenance work is going on in Jyatha area, according to Gurung.
Similarly, TTDC is installing CCTV camera system and solar-powered street lights in Thamel in coordination with ward offices and local consumer committees. “We are installing 40 CCTV cameras and 20 street lights,” he added.

Bijay Baral, a local of Thamel, said the decision to declare Thamel vehicle-free has not only made the area peaceful but also solved the problem of parking. “Haphazard parking of vehicles was pestering us. Now, it has been solved,” he said, urging the authorities to manage tangled electricity and communication cables.

Meanwhile, TTDC plans to organize cultural shows on the streets every week to welcome more tourists. “To begin with, we will have performance by Gandharvas who play Sarangi -- the traditional stringed instrument,” he added.

According to Gurung, TTDC has requested all restaurants and bars to open till 4 am in the morning for Christmas and New Year. It has also corresponded to the District Police Office, Kathmandu, for management of crowd on these two days.

POKHARA, June 13:  The number of self-drive tourists in Pokhara is on the rise in recent months. ... Read More...

RATNANAGAR (Chitwan), June 24: As many as 81,813 tourists have visited the famed Chitwan National Park (CNP) during the last... Read More...

Former Nepali envoy to Pakistan no more
3 hours ago

IN PICS: Youths seek justice for 12-year-old girl killed after rape
7 hours ago

IN PICS: Youths seek justice for 12-year-old girl killed after rape
7 hours ago