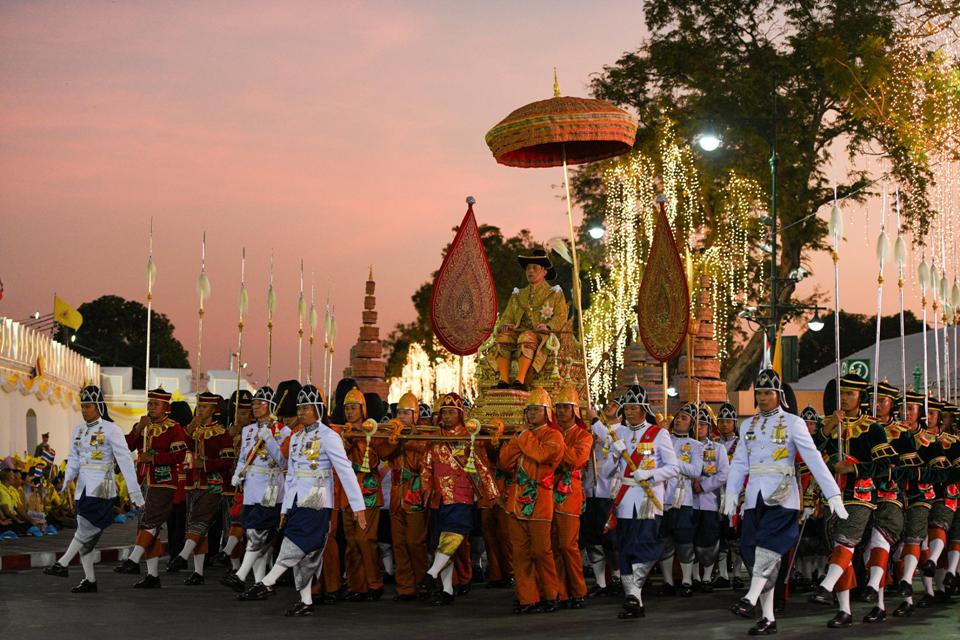 BANGKOK , Dec 13: Aboard a golden royal barge, King Maha Vajiralongkorn was rowed along the river winding through the oldest part of Bangkok on Thursday, as thousands of loyal Thais thronged the banks to see the final ritual of his drawn out coronation.

King Vajiralongkorn, also known as King Rama X, was formally crowned in May, during three days of ceremonies filled with ancient Brahmin and Buddhist rituals, but the barge procession marks the monarch’s last journey in his ascent to the throne.

As part of a near seven-century-old tradition, the king’s vessel was positioned in the centre of a procession of 52 gold-painted barges, elaborately carved in the shape of swans and mythical creatures.

Dressed in ceremonial costume, some 2,200 oarsmen rowed the wooden vessels along the 3.4-kilometre (2-mile) route, keeping time with the help of chants.

The king was accompanied by Queen Suthida Bajrasudhabimalalakshana and his 14-year-old son, Prince Dipangkorn Rasmijoti, on one barge, while his two daughters were on another.

As the vessels glided over the Chao Phraya River, Thais dressed in the auspicious colour yellow watched with reverence.

“I am a Thai and I want to attend this ceremony so I can tell my children about how great our country is,” said Sudarat Sangyuthanan, a 55-year-old woman.

Devotion to the monarch is an ingrained part of Thai culture where the king is considered by many as a living-god.

“The king has just been crowned and I want to show him that we, the Thai people, are with him and are supporting him all the way, so the country can progress in the way our forefathers have wanted to build it,” said 64-year-old Patipan Mahantanathibodi.

The monarchy’s bond with the people was strengthened during Vajiralongkorn’s father’s 70-year reign. King Bhumibol Adulyadej

was widely loved and regarded as a pillar of stability during decades of political turbulence and rapid development in Thailand.

Though King Bhumibol forewent the barge ceremony at his own coronation, he revived their use to enhance the spectacle of major religious ceremonies, notably the celebration of the 2,500-year-old Buddhist era in 1957.

“In the past when there were no television or modern communication, so a ceremony like this allows members of the public to see the new king after he was crowned,” Tongthong Chandransu, an expert on royal protocol told Reuters.

“The last time we had such a ceremony was almost a century ago,” he said.

The last barge procession for a coronation was in 1925, when King Prajadhipok, Thailand’s last absolute monarch, ascended the throne.