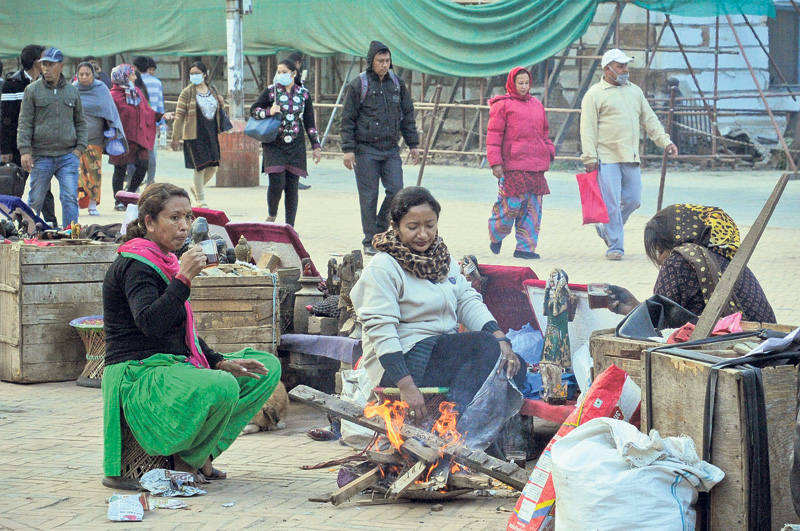 KATHMANDU, Dec 22: Although the winter yet to reach its peak, dense haze shrouded eastern and central regions of the country on Wednesday, plummeting the temperatures by at least a few degrees Celsius.

The movement of wind affects how long the haze lingers. Stating that the wind movement is usually minimum during winter, Meteorology Forecasting Division (MFD) expects the hazy weather to continue on Thursday as well. Haze affects clarity of the sky and obscures visibility.

“The hazy weather at present is the result of moistures brought by the development of troughs in the Bay of Bengal,” informed meteorologist Shanti Kandel at the MFD, a division under the Department of Hydrology and Meteorology (DHM). She further added that such conditions are normal in winter and the public do not have reasons to worry.

However, she warned the public to brace for colder days ahead, stating that the temperature will plummet further within a week when the winter reaches its peak in January.

Along with the Kathmandu Valley, Pokhara, Dhading, Gorkha, Taplejung, Dolakha among other hill districts of the central and eastern regions have experienced hazy climatic condition and increasing cold.

Much to the relief of many people, the country would not experience any rainfall despite the hazy conditions, informed Barun Paudel, another meteorologist at the MFD. And despite hazy conditions obstructing visibility, Paudel informed that it had no effects on domestic flights as all the flights operated smoothly.

Despite changes in the weather condition of the hill districts, the tarai districts are enjoying comparatively warmer weather, according to Kandel. Fogs and hazes seen in those districts until a few days ago have now cleared, and there are no signs of weather disturbance in the MFD's three-day weather forecast, she added.

Although reports of cold waves in the tarai districts circulated in some media, meteorologist Kandel said those were not cold waves although it may have seemed so. “Cold waves could last for about 20 days to a month. The dense fogs in some of the tarai districts clouded the sun for a few days, but it did not meet the requirements to be considered as cold waves.”

Cold waves claim at least a few dozens of lives every year in the tarai districts. Mostly, the elderly people and children from poor financial background are vulnerable to deaths by cold waves. Just a few days ago, two persons reportedly died of cold in Saptari district. Such reports are expected to pour in during peak of the winter season.

Jumla district is the hardest hit by cold at the moment with its minimum temperature already reaching minus 3.2 degrees Celsius.

KATHMANDU, Nov 29: The weather is likely to remain disturbed in eastern and central regions of the country for a... Read More...

KATHMANDU, June 30: The Meteorological Forecasting Division (MFD) under the Department of Hydrology and Meteorology (DoHM) has warned that there will... Read More...