Television sales up by 20 percent: Traders 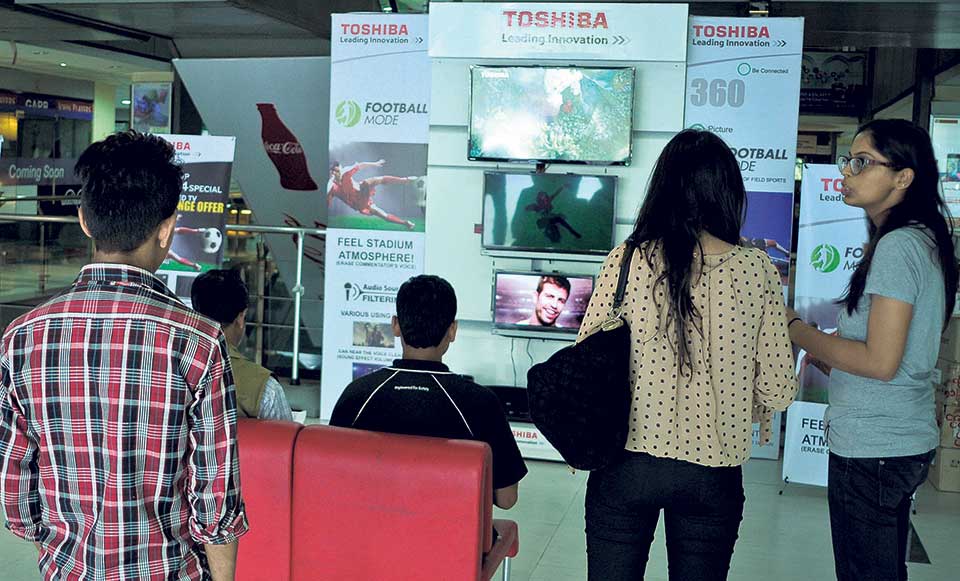 KATHMANDU, Jan 11: End of power cuts and availability of television with advanced functionalities have given a boost to sale of television sets, traders say.

“Sales have increased by more than 20 percent compared to last year, and this is mainly due to the fact that the country is free of power cuts due to efforts made by the Nepal Electricity Authority (NEA),” said Deepak Lath of Samsung Plaza, Kumaripati, Lalitpur.
Another trader, Sunil Timalsina of Super Smart Electronics situated in New Road, Kathmandu, seconded his claim, “Nepali population look for the latest products with advanced technology.

As television with 4K display and Android compatibility are available in the market, we have experienced a surge in sales by at least a fifth.” Timalsina added: “As the population of Kathmandu valley is ever-increasing and TV sets being a necessity nowadays, demand for television sets have increased drastically over the past year.”

Sony, Samsung and LG are the best-sold television brands in Nepal, according to traders. “Samsung and Sony are most sought after brands followed by LG. This is because costumers consider these brands more trustworthy and do not hesitate to pay more for television sets of these brands,” Aman Shrestha of Esquire TV Center, New Road, said.

“Although other brands providing the same features may seem somewhat cheaper, there is a day and night difference in the quality and durability of Sony, Samsung and LG products,” said another trader of Kumaripati, Lalitpur. “The growth in demand for high-end television sets is due to the fact that the purchasing power of people has increased and people tend to embrace a luxurious lifestyle especially in the capital city,” further added Timalsina.

The demand for LED Smart Television with Full HD display is very high, according to traders. “Despite the availability of Ultra HD or 4K display televisions, 80 percent of the television sets sold in the market are Full HD televisions as Nepali cable service providers do not provide such high-definition content. This means viewers are left with the option of watching home videos or using YouTube videos or media streaming platforms such as Netflix which is not idealistic due to insufficient Internet speed in Nepal,” said Shrestha.

The demand for television with screen size of 40-49 inches is the highest in Nepal, followed by sets smaller than 32 inch and sets with screen size higher than 49-inch, according to traders.

Traders are hopeful that the sale will increase further in the coming days. “Due to the approaching wedding season, television sales will increase further as Nepali families often gift television sets to bride,” Amar Jha of New JB Enterprise, Kumaripati, said.
Deepak Lath of Samsung added: “During the 2014 World Cup, up to 35 television sets were sold in a day. An exponential growth in sales is expected this year as well as the extremely acclaimed sports tournament is set to return in TV screens between mid-June and July.”

KATHMANDU, July 23: Following reduction of brokerage commission by 40 percent, Securities Board of Nepal (Sebon) has also brought down... Read More...

Experts' conclusion: Air accidents increased due to lack of full compliance with ICAO standards
1 minute ago