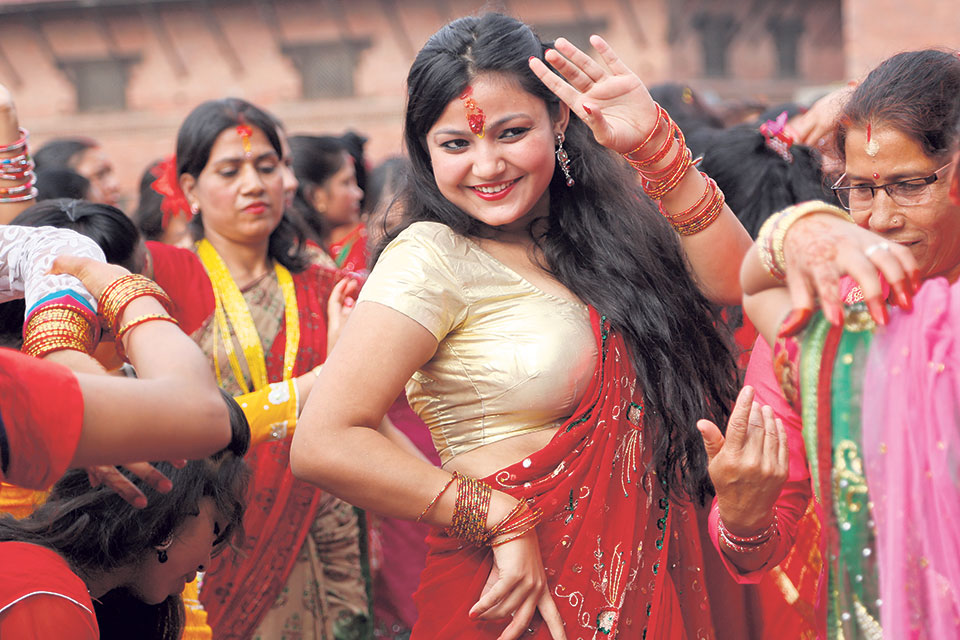 Every year we know that the Teej festival is near when we get to read about the new 'Teej' songs in the newspapers or hear new 'Teej' songs on radio or watch the video on TV and YouTube.
Just the other day, I was searching for benefits of not smoking on YouTube as I was entering my fourth day of not taking any nicotine sticks. I did find many videos telling me what happens after twenty minutes, twenty four hours and a year after I quit smoking and, at the same time, YouTube also offered me some trending videos from Nepal.  And there were a couple of new 'Teej' videos as well.

My wife is a big YouTube fan. She is always using YouTube to learn new recipes or watch Kollywood songs and even South Indian movies as well. I think we should learn from the movies made in South India because they have everything packed in the two-hour masala mix.

Bollywood movies are now like movies made by lazy bums who just want to steal your money by offering you a two-hour long story that goes nowhere. Our movies nowadays mostly have all the story and fun in the first half while the story runs out in the second half and is filled with action and chasing around and other useless antics. But if you watch any South Indian movies, then you will learn to respect the writer. There is so much masala and drama that you feel for the villain and even the sidekick of the hero whose only job is to get beaten up by the heroine's friends every twenty minutes.

Well, let's get back to the 'Teej' story and not get carried away by what we can learn from South Indian movies. Talking about Teej, earlier it was mostly about feasting, then fasting and then praying but now it is more about dancing to the 'special' Teej songs, getting wasted at party palaces, and even getting into fistfights as well. Yes, we do hear about some of our ladies getting drunk and trying to show their 'wrestling' skills on one anther during the so-called 'Teej' parties at party palaces around town.

I think some of our party organizers should ban alcohol and only provide fresh juices during such parties. Nobody is going to go wild drinking a dozen glasses of apple juice. And when it comes to dancing, the special 'Teej' songs are either vulgar or have the double-meaning stuff that makes you either blush, feel embarrassed or curse the singers for even trying to sing such songs and letting the world know about it.

My wife was going through some of the 'Teej' songs on YouTube and she showed me a video where the lady tells her husband that either she has a 'Luto' or a 'Pilo' but doesn't know what it is except it is 'Gilo'. Now, either we should congratulate the songwriter for coming up with such rhymes or ask him or her to take a few months of Nepali writing class so that t he/she can come up with better lyrics next time.

Many years ago, I heard a special 'Teej' song where the singer sang about her desire to elope with someone even when she was married to someone else. Well, a song is a song and it's not really going to inspire someone to do something stupid unless the one listening to such songs is indeed stupid.

But the video talking about ‘Luto’ and ‘Pilo’ was not only disgusting but I felt bad for the singers instead of the models acting in the videos. The singers looked like they could be good at singing bhajans. Maybe that's why they say looks can be deceiving. The model on the video knew what she had to do and she has every right to portray her character in a manner that most of us might find repulsive. After all, maybe that's what the director wanted from her. Who cares about method acting when you are doing a three-minute music video that wants to mint some money?

My wife does not attend any Teej parties. She usually stays home or visits her mother and has lunch and that's about it. I tell her that she should attend one of the so-called Teej parties and see for herself what happens there.  There is nothing wrong with feasting, fasting and then praying for a long life of your loved one but I really don't like it when my wife doesn’t eat and fasts every other week especially in the month of Shrawan.  I know she means well and it is part of our Hindu culture but if women have 'Teej' then maybe we men should have something similar too: A day when we party like crazy animals then we fast the next day or sleep to get rid of the hangover and then pray for our wives' long life and happiness.

Earlier it was mostly about feasting, then fasting and then praying but now it is more about dancing to the ‘special’ Teej songs, getting wasted at party palaces, and even getting into fistfights as well.

I have finally quit smoking but I’m not really sure how long will this 'quit nicotine' movement last. Will it last for life or will I relapse and get back to smoking after a month or two. I’m hoping that I will be able to quit for life this time. It's now been five days and the first few days I was eating chocolates like crazy and spending five times more than I did on nicotine sticks. Then, I quit eating tons of chocolates because I suffered from stomach cramps and had to rush to the restroom every hour. Now, I’m taking cloves and cardamom whenever I feel like a smoke.

I want to live a long life and I’m thankful that my wife prays for my good health but I also must make sure that I stay healthy by not smoking and exercising and eating a balanced diet. My wife and I wife finish watching the 'Luto, Pilo, Gilo' video and then just shake our heads and shrug it off because that's what 'Teej' has become today. We need that 'item number' every Teej like we do in our movies. Yes, times are changing and even though the old blame the new generation for being wild, we all know that the songs during our grannies' times had double meanings then as well. The only thing they didn't have then was YouTube.

Every year we know that the Teej festival is near when we get to read about the new 'Teej' songs... Read More...

KATHMANDU, July 22: The video of Manju Poudel and Santu Thapa’s ‘Chamma Chamma’ was released this Friday. The video portrays the... Read More...