Keshav Bhattarai is a Professor of Geoscience at the University of Central Missouri, USA. He can be contacted at bhattarai@ucmo.edu. Hari KC is a PhD scholar, Central Department of Physics, Tribhuvan University, Nepal and can be reached at hari1.755711@cdp.tu.edu.np.
news@myrepublica.com

The case of atmospheric aerosol loading and repeated casualties from lightning in the Siwalik/Churia range also proves this.

Technology has eased human lives but not defeated geography. The case of repeated casualties from lightning and thunderstorm in the Siwalik/Churia range and fewer cases of such casualties in the mountainous region is an example of how despite the emergence of 21st century technology, it has not defeated geography. Like the saying of Canadian Prime Minister Trudeau while visiting American President Richard Nixon in 1969 - living next to America is like sleeping with an elephant, which can affect its neighbor by its every action. Like this saying, no matter how friendly our neighbors are, their economic developments have impacts on Nepal’s environment.

Nepal cannot change its geography. The location of Nepal’s Siwalik/Churia range is like that of the Tornado Alley in Oklahoma of the USA where the Great Plains allow cold air from the Arctic to meet the warm humid air coming from the Gulf of Mexico. The meeting of cold and warm air masses develops a series of twisters in Oklahoma and forms supercell thunderstorms that damage property and lives. Though it is not to the extent like in Oklahoma of the USA, the cold air masses coming from the north meet the warm air masses cumulatively coming from the southern part, especially, from India and Nepal’s Tarai, and converge over the sky of Siwalik/Churia contributing to various lightning and thunderstorms.

Physics Professor Shri Ram Sharma of Amrit Science Campus in Kathmandu, from his long-time research, has concluded that the lightning incidences and casualties in and around the Siwalik/Churia range are relatively higher than in other parts of Nepal. The goal of this article is to bring awareness to the community about lightning and thunderstorms arguing that despite technological advancement, Nepal has not been able to shift this lightning epicenter from Siwalik/Churia, nor has the technology been able to minimize the transboundary air pollution effects coming from the southern neighbor. Though some technological knowhow has helped in protecting buildings from lightning through proper earthing, still the Siwalik/Churia region suffers from lightning and thunderstorms more than the other parts of Nepal.

This article analyzes lightning data of the 2011-2021 period to assess this situation. These data are obtained from the Global Lightning Dataset GLD360 network owned and operated by Vaisala Inc within a resolution of 3 km by 3 km. The authors aim to inform society about lightning and thunderstorms - what it is, what produces it, who monitors it and how this problem can be ameliorated. Further, the authors wish to clarify that lightning and thunderstorm is a product of diffusion of negative and positive charges of clouds 10-25 kilometers above the ground. A lightning incidence does not target any specific objects on the ground. It is accidental as lightning activities occur several kilometers above the earth’s surface. Except for accidently falling on huge structures such as trees, water bodies, and buildings, the assumption that lightning falls on big trees, stones, and metallic objects and it is a creation of the anger of the mighty gods is a myth. Likewise, since lightning does not occur on specific locations due to variations in the movement of negative and positive charges in the atmosphere at higher elevation above the ground, no technology has been developed to capture, store, and reuse the huge energy emerging from lightning.

It is a sudden atmospheric electric discharge due to imbalance of electric charge in a cumulonimbus cloud. This cumulonimbus cloud is an extreme form of moist convection that may extend as high as 21km or more above the ground. Due to high currents (~30 kilo Amperes) and high temperatures (~30,000 Kelvin) within the lightning channel, lightning presents a major natural hazard to public, civil aviation, power companies, and industries. Many forest fires are often reported from lightning. Almost 24,000 individuals lose their lives every year due to lightning bolts at the global scale and almost ten times of this number are injured as well. Most commercial airlines are struck annually by lightning. However, technology has helped to protect planes from protective metal skin with minimum damages.

In Nepal, lightning/thunderstorms take 100-125 lives each year. Most lightning incidents occur in the Siwalik/Churia range. The Ministry of Home Affairs reveals the statistics of deaths and injuries from lightning and thunderstorms each year. The ministry also provides some financial compensation to the victims. Further analysis of the lightning data at the provincial level suggests that the Bagmati and Lumbini provinces have suffered more from lightning as compared to other provinces. These provinces contain a high volume of aerosol compared to other provinces. However, in 2020, these provinces showed a drastic reduction in the incidents of lightning. This could be an indication of halting anthropogenic activities due to the COVID-19 periodic lockdowns. 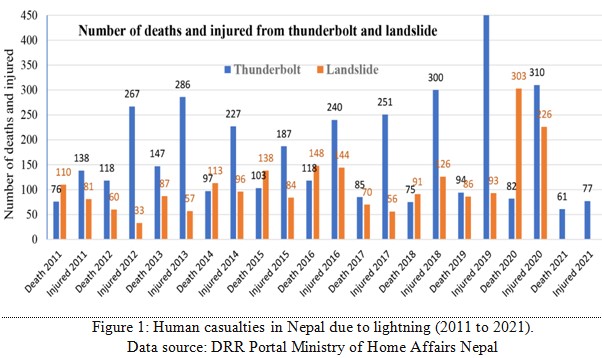 A histo-geographic analysis of lightning incidents suggests that the northern areas of Nepal receive fewer lightning thunders than the southern region. Literature reveals that the high lightning densities are associated with increasing anthropogenic activities. Gaseous emissions coming from industries, vehicles, burning of agricultural residues and other agricultural activities, burning of moisture containing firewood for cooking, brick processing, and cremation, forest fires, accidental fires, and various developmental works are the major activities contributing to increase atmospheric gases and aerosol loading. These activities are found more in the southern parts of Nepal than in the northern parts. Over 50 percent of the country’s population is concentrated in the southern plains. The Siwalik/Churia range serves as a convective point for warm and cold air and becomes the hotspot for lightning and thunderstorms in Nepal.

Additionally, the lightning activity is also induced by high surface temperature, relative humidity, cloud base height, and aerosol loading. Even in the southern region, the eastern part of Nepal meets these conditions and this region has been experiencing more lightning incidents than the western part. This could be attributed to the industrial activities, rapid urbanization, increasing construction activities leading to deforestation. Additionally, these areas are in proximity to the Indian States of Bihar and West Bengal where the population density and industrial activities are high. Activities within Nepal and its neighboring countries contribute to aerosol loading to the atmosphere which become one of the major precursors of lightning with the formation of thunderclouds. Yet, the orographic precipitation, increasing atmospheric water vapor, suspended particulates, formation of water droplets from condensation lead to the collisions of differently charged droplets leading to the increasing amount of lightning.

Who monitors lightning activities in Nepal?

The lightning activities in Nepal have been continuously monitored through satellites and ground-based instruments by different institutions of various countries. NASA operates a Lightning Imaging Sensor (LIS) at the International Space Station (ISS) to monitor such phenomena over tropics and subtropics that also covers the areas of Nepal. Other ground-based instruments gathering lightning information include Global Lightning Dataset GLD360 network, Worldwide Lightning Location Network (WWLLN)- developed through collaborations with research institutions across the world to gather real-time lightning discharge information.

What can be done to save human lives?

Though several natural factors contribute to atmospheric aerosol loading and increasing incidents of lightning, human activities seem to be the major precursors for lightning. For example, the activity of lightning in 2020 and 2021 has significantly decreased even in the eastern hot belt of Nepal because many of the human activities were limited due to various restrictions imposed during COVID-19 lockdowns. Though COVID-19 will never be venerated by humankind, a decrease in the quantity of aerosol loading to the atmosphere and a significant decrease in lightning incidents suggest that the damage from lightning may be ameliorated through proper environmental regulations. However, it becomes beyond the limitation of Nepal when cross-border emissions come from its neighbor. The increasing population obviously contributes to various emission activities - be that from industrial or vehicular operations or from constructional activities in the urbanizing age  - and from agricultural activities.

Nonetheless, evidence from a decrease in the incidents of lightning in 2020 and 2021 due to the decrease in aerosols probably due to the restrictions imposed to curb COVID-19 suggest that the casualties due to the increasing incidents of lightning can be ameliorated through two steps. First, regulating human activities with strict imposition of environmental laws, and second, advancing 21st century technology that would help curb emission. If planned properly. Nepal’s newly opened educational institutions may not only contribute to advance to 21st century technology but also bring public awareness to monitor the environment through proper education. Yet, it is hard to defeat geography.

(Keshav Bhattarai is a Professor of Geoscience at the University of Central Missouri, USA. He can be contacted at bhattarai@ucmo.edu. Hari KC is a PhD scholar, Central Department of Physics, Tribhuvan University, Nepal and can be reached at hari1.755711@cdp.tu.edu.np.)