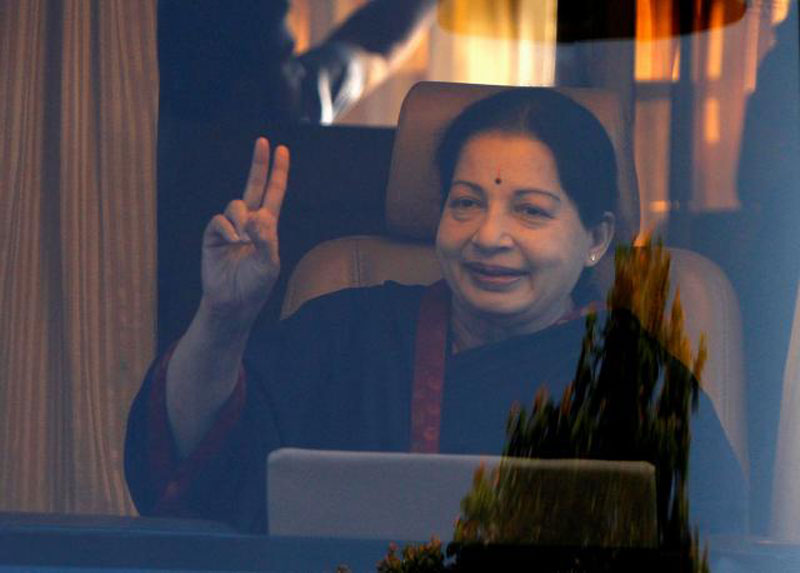 One of India's most popular politicians, Jayalalithaa Jayaraman, died on Monday following a massive cardiac arrest, setting off an outpouring of grief among thousands of supporters gathered outside.

Her political party and the hospital where she was being treated confirmed the popular former film actress and chief minister of southern India's Tamil Nadu state, widely known as "Amma" or "Mother", had died at the age of 68.

"Our beloved leader, The Iron Lady of India ... is no more," tweeted her AIADMK party, the third-largest party in India's lower house of parliament in New Delhi.

Her death deprived her regional ruling party of its only charismatic leader, whose portrait adorned placards and posters around her home state and who was tipped as a possible future Indian prime minister.

Jayalalithaa had gone into cardiac arrest on Sunday night, the Apollo Hospital in Chennai said, following her admission with fever and dehydration in September.

Despite being resuscitated and put on life support, "her underlying conditions rendered her unable to recover and she passed away at 11:30 p.m.", the hospital said in a statement.

"Jayalalithaa ji's connect with the citizens, concern for welfare of the poor, the women and marginalized will always be a source of inspiration," Modi said.

The news of her death was met with howls of grief and tears from the crowd of supporters outside the hospital. Rumours earlier in the evening that she had died, which proved to be false, led to brief unrest.

About 2,000 policemen were deployed around the hospital in case crowds of devoted supporters reacted strongly to Jayalalithaa's death. Supporters have been known to commit suicide in reaction to bad news.

"Nothing can kill Amma," said one man holding a picture of the leader outside the hospital earlier as doctors battled to save her life.

Aloof and powerful, Jayalalithaa had a cult following among the people of Tamil Nadu that endured even though she went to jail for corruption more than once.

She began a film career at 16 and rose to stardom with dozens of hit Tamil films, often with her screen partner M.G. Ramachandran, an actor-turned politician who then served three terms as chief minister of Tamil Nadu state.

With voters ready to confer god-like status on their matinee idols, she also went into politics and trumped her mentor by serving five times as head of the state government.

Jayalalithaa leaves behind a legacy of populist schemes, including giving away free cellphones, laptops and kitchen grinders that endeared her to millions of voters. She also drew foreign investors to India's second largest state economy.

Her death opens up a leadership vacuum in her AIADMK party, which she ran with an iron hand with designated successor.

O.P. Panneerselvam, a cabinet colleague, has stood in for Jayalalithaa in the past, but he has repeatedly made it clear he was not replacing her. He pointedly refused to take her place at the head of the cabinet table while she was ill.

The AIADMK and its bitter rival, the DMK party, are the main political groupings in Tamil Nadu. Both are built around a personality cult of their leaders, both of whom are drawn from the Tamil film industry.

India's two national parties, the ruling Bharatiya Janata Party and the opposition Congress, have little political presence in the state, despite decades of efforts.

The death of Jayalalithaa's mentor Ramachandran, or MGR as he was known, sparked looting and rioting across Tamil Nadu by his grief-stricken supporters in 1987.

The U.S. consulate in Chennai asked American citizens to avoid areas where demonstrations were happening and be vigilant because of the chance of violence.

"U.S. citizens are reminded that even gatherings intended to be peaceful can turn confrontational and escalate into violence," the consulate said in a notice posted on its website.

The life of the leader of Tamil Nadu hung in the balance on Monday after she went into cardiac arrest,... Read More...