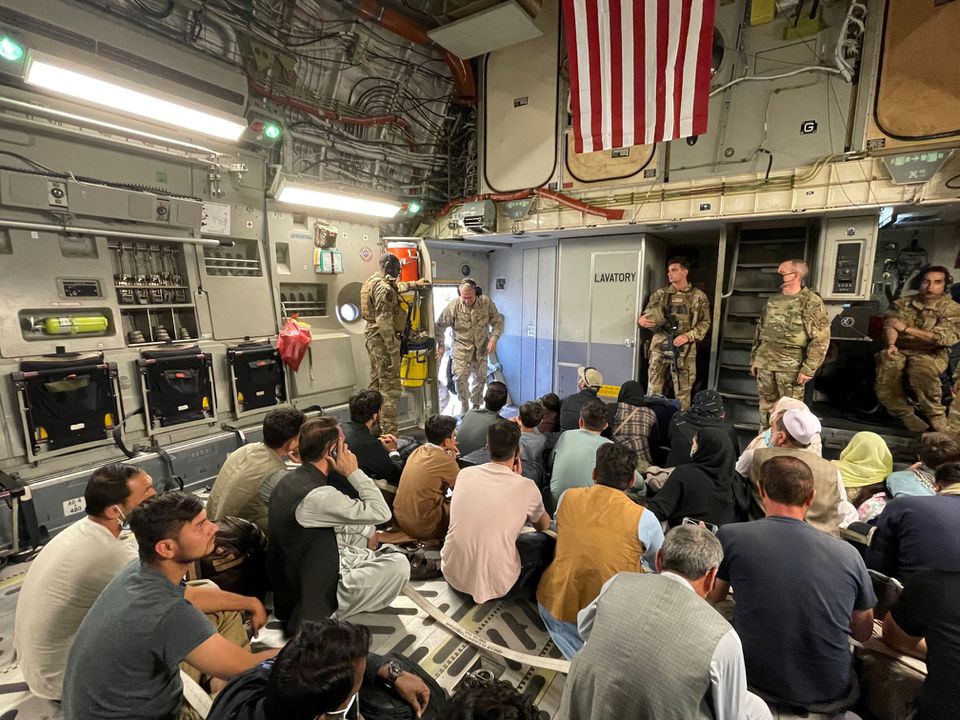 KABUL, August 19: Armed members of the Taliban kept people desperate to flee Afghanistan from reaching Kabul's airport on Wednesday, witnesses said, while President Joe Biden vowed to keep U.S. troops in the country until all Americans are evacuated.

Since the Taliban entered Kabul over the weekend, scenes of chaos have unfolded as thousands seek to leave, fearing a return to the austere interpretation of Islamic law imposed during the previous Taliban rule that ended 20 years ago.

"Everyone wants out," said a member of an Afghan family after it arrived in Germany. "Every day is worse than the day before. We saved ourselves but we couldn't rescue our families."

Witnesses said Taliban members prevented people from getting into the airport compound, including those with the necessary documents to travel.

"It's a complete disaster. The Taliban were firing into the air, pushing people, beating them with AK47s," said one person who was trying to get through.

A Taliban official said commanders and soldiers had fired into the air to disperse crowds outside Kabul airport, but told Reuters: "We have no intention to injure anyone."

(For a graphic on the airport chaos, click on: https://tmsnrt.rs/3stVpcj)

As the airlift of Western citizens and Afghans who worked for foreign governments sought to ramp up, Biden said U.S. forces would remain until the evacuation of Americans was finished, even if that meant staying past the Aug. 31 U.S. deadline for complete withdrawal.

The president, who has faced criticism about the U.S. departure, said chaos was inevitable. Asked in an interview with ABC News if the exit of U.S. troops could have been handled better, Biden said: "No. ... The idea that somehow, there's a way to have gotten out without chaos ensuing, I don't know how that happens."

U.S. officials have told the Taliban "that we expect them to allow all American citizens, all third-country nationals, and all Afghans who wish to leave to do so safely and without harassment," U.S. Deputy Secretary of State Wendy Sherman told reporters in Washington.

But the 4,500 U.S. troops in Kabul cannot help bring people to the airport for evacuation because they are focused on securing the airfield, U.S. Defense Secretary Lloyd Austin told a Washington news conference, acknowledging that evacuations had not reached targets.

General Mark Milley, chairman of the U.S. Joint Chiefs of Staff, said security at the Kabul airport was stable and the Taliban were not interfering with U.S. military operations.

Foreign ministers of the Group of Seven nations are due to discuss the evacuation effort and seek to coordinate flights at a virtual meeting on Thursday, German Foreign Minister Heiko Maas said.

About 5,000 diplomats, security staff, aid workers and Afghans have been evacuated from Kabul in the past 24 hours and military flights will continue around the clock, a Western official told Reuters.

Some 150 km (90 miles) east of Kabul in Jalalabad, at least three people were killed in anti-Taliban protests on Wednesday, witnesses said. The protests provided an early test of the Taliban's promise of peaceful rule.

After seizing power, the Taliban said they would not take revenge against old enemies and would respect the rights of women within the framework of Islamic law.

Two witnesses and a former police official told Reuters that Taliban fighters opened fire when residents tried to install Afghanistan's national flag at a square in the city, killing three and injuring more than a dozen.

A new government to replace that of President Ashraf Ghani, who is in exile in the United Arab Emirates, may take the form of a ruling council, with Taliban supreme leader Haibatullah Akhundzada in overall charge, a senior member of the group said.

Afghanistan would not be a democracy. "It is sharia law and that is it," Waheedullah Hashimi told Reuters.

A "lack of clarity" over the Afghan government prompted the International Monetary Fund to suspend the country's access to resources including $440 million in monetary reserves. The U.S. Treasury pushed for the move to ensure that an allocation to Afghanistan scheduled for Monday not fall into Taliban hands. read more

Ghani, who has been bitterly criticised by former ministers for leaving Afghanistan as Taliban forces swept into Kabul on Sunday, said he had followed the advice of government officials. He denied reports he took large sums of money with him.

"If I had stayed, I would be witnessing bloodshed in Kabul," Ghani said in a video streamed on Facebook.

The Taliban have suggested they will impose their laws less severely than during their former rule, and a senior official said on Wednesday that the group's leaders would be less reclusive than in the past.

Hashimi said the role of women, including their rights to work and education and dress code, would ultimately be decided by a council of Islamic scholars.

"They will decide whether they should wear hijab, burqa, or only (a) veil plus abaya or something, or not. That is up to them," he told Reuters. read more

Under the Taliban's 1996-2001 rule, women were prevented from working, girls were not allowed to go to school and women had to wear all-enveloping burqas to go out.

Many Afghans were sceptical of the Taliban promises.

"My family lived under the Taliban and maybe they really want to change or have changed, but only time will tell and it's going to become clear very soon," said Ferishta Karimi, who runs a tailoring shop for women.

'Don't panic and get back to work', Taliban order former officials

August 25: Ashraf Haidari, an economist at the Aghan finance ministry, was waiting anxiously at home when a call came... Read More...

Taliban take over Afghanistan: What we know and what’s next

August 17: The Taliban have seized power in Afghanistan two weeks before the U.S. was set to complete its troop... Read More...