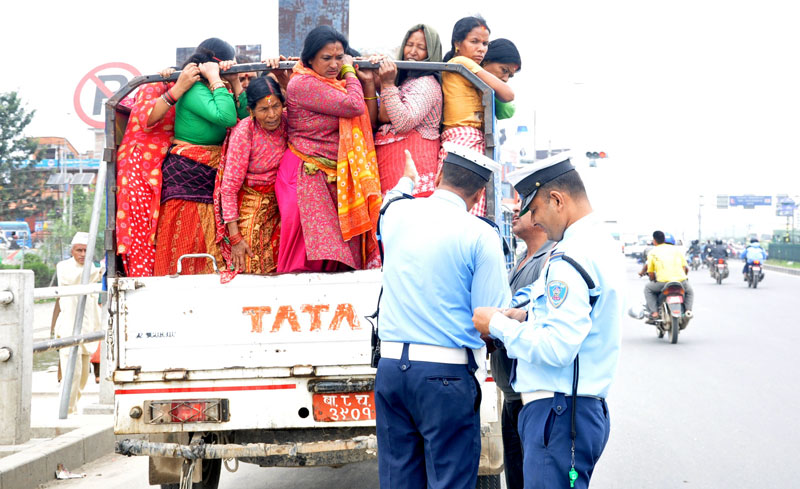 Recently, our traffic police increased the fines for all traffic violations. I told my wife it was a good thing and our Kathmandu drivers will now think twice before violating traffic rules.

My wife seems to have some kind of beef with our traffic police. She doesn’t like the folks who have to stand up and breathe in polluted air while they do their jobs. Whenever she sees a traffic cop, she snarls violently and then tells me that traffic cops only stop vehicles because they want some pocket money. I tell her that it’s not true and yes, they do get some kind of a commission from every ticket they issue to those who violate traffic rules but they are just doing their jobs.

Thus ensues our husband and wife discussion series where both of us will keep on blabbering for another half an hour supporting and opposing whatever our traffic cops are doing. My wife then begins her ‘Why I hate traffic cops’ story. When she was studying for her Bachelor’s Degree, she was harassed by a traffic cop who used to stop her every morning on her way to college. After a week-long harassment, she nearly ran over the cop and then threatened him with bodily harm if he didn’t stop checking her driving license every other day.

I told my wife that maybe the cop was hitting on her and it was good that she faced the harasser and gave him a tongue-lashing or else if he had asked her for a date she would have been a cop’s wife instead of a guy’s who used to think he would turn out to be a Nepali Richard Branson by the time he was in his 30s. Well, I’m still here and I have been a successful failure so far after trying out newspaper publishing, producing music albums and all other ventures possible in this land. Maybe I will write a book someday on ‘Why and How I Failed’ and maybe it will be a bestseller and I can go on a book-signing tour across the country.

I spent a decade in the west and I got only one traffic ticket in my name. I was doing a 60 mph on a 30 mph road and the cop was hiding behind a bush at two in the morning. Instead of writing a check, I pleaded not guilty, went to court and got the fine reduced to 120 dollars from 200. I saved 80 bucks for the weekend. But here in this country, traffic fines are minimal and that’s why we are not afraid to break the rules.

It’s been almost nine years since I have been driving around the city and I hadn’t gotten any traffic ticket until last week when I got two. I was on my way to TU to pick up my wife who is currently doing her Masters. I was stopped right near the bridge in Balkhu. The traffic cop literally jumped in front of car and waved his arms as if I had run over somebody and was fleeing from the scene. I asked him why he was so anxious to body slam my car.
He didn’t tell me anything but asked for my driving license and started writing the ticket. When I asked him why, he got angry and told me that I had not put on the seat belt. For the first time in my life, I forgot to wear the seat belt and I blame my wife for it. I was wearing the seat belt but had to take it off to get my mobile phone. My wife was calling me, for the fourth time, to inquire about my whereabouts and how long it would take me to pick her up from Kirtipur. She thinks I drive 100 km per hour and there will be no traffic jam in the Balkhu area in the middle of the day. Then I forgot to wear the seat belt and, as luck would have it, I met a good traffic cop who was doing his job.

I then went to the bank to pay the fine the next day. It took me less than ten minutes to finish the job at the bank. Then, I went to the traffic police station and it took me two hours to get my license back. The guy who was responsible for checking the payment slip and handing back the license was out somewhere drinking tea. I waited for an hour and he still didn’t show up. That’s why you should never show up at any government office at 10am sharp. Give the man or woman at least an hour or two after opening time to get there.

A few days after getting my first traffic ticket, I got a second one. I usually go to a restaurant in Kathmandu for so-called business meetings. I have been going there since I was a kid. When I was a teenager, it was for dates. When I was a young man, it was for reunions and dates. Now that I’m married and not-so-young, I only go there for meetings or take my wife for the BBQ thing every other weekend. I have been parking in front of the restaurant for ages but I guess the new traffic inspector in the area decided that things must change now.

I met my potential customers for breakfast and after an hour of so-called discussion about my products, I got out to head home. A traffic cop came running after me as if he was training to participate in the 100m in the Rio Olympics. He asked for my license and then gave me a ticket for parking in a restricted area. I told him that I have always parked there but he showed me a no-parking sign that was 100m away from the restaurant. It was a Saturday morning, and it was an inner road so I asked him to let me go just this once and he suddenly turned deaf. I thanked him for doing his job and headed home.

But I still support the traffic cops and their work. My wife doesn’t. I think traffic fines should be ten times more than it is right now, even after the increment. Of course, our micro people will then do a ‘chakka’ jam whenever our traffic cops raise the fines but we should have fines that will make us think twice before violating the rules. Rs 500 for parking at a no-parking Zone – that’s just peanuts for those who can afford to buy a vehicle. Why not make it Rs 5,000 and then we all have to think twice, look around at least thrice and make sure that we are not breaking the law.

My wife tells me I should join the police force and be a traffic cop instead. But I’m past the maximum age limit to apply for a government job by a few years. I tell her she should finish her Masters, sit for the Lok-Sewa exams and be a civil servant but one who shows up at work on time, does her job efficiently and does not take pocket money from service seekers.

KATHMANDU, March 6: It's not uncommon that roads are blocked and traffic movement is diverted to ease VIP motorcades in... Read More...