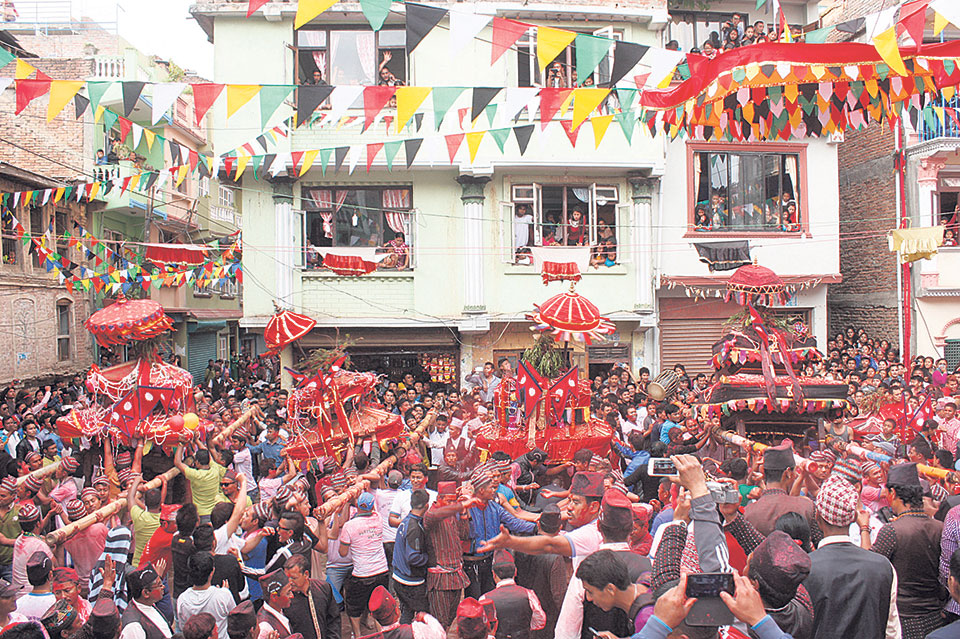 On the first day of the Nepali calendar (Baisakh 1), many people line up to take a dip in a holy pond in Tokha in Kathmandu and the locals, for the next four days, celebrate ‘Sapan Tirtha Mela’ when the entire village joins in on the celebration with a ‘rath yatra’ (chariot ride), prayers, and fests. The water in the pond is believed to have healing properties and people bathe there to rid themselves of their ailments and pray to Goddess Sapana Tirtha.

“Sapan Tirtha Mela is an important ritual for the locals of Tokha. This common belief that the pond and the Goddess can make our wishes come true is what binds us,” says Kancha Dangol, chief priest at the Sapana Tirtha Temple. For many years now, Dangol has been looking after the arrangements of the festival. He became chief priest after his father passed away and says that his son will be taking over after him.

Legend has it that, centuries ago, on the northern side of Kathmandu lived a king who had seven daughters. The king was famed for his wisdom, moral characteristics, and brilliant political tactics. One day, he called his daughters and asked them to tell him the characteristics of men they wanted to marry. Four of them expressed their desire to marry someone who was rich, handsome and physically strong. The other two said they were not ready for marriage yet. However, the youngest princess said she would marry anyone her father chose for her. The king, jokingly, told her to spend the rest of her life with a physically disabled beggar who lived near a pond.

To everyone’s surprise, the youngest princess decided to marry that man as a mark of respect for her father’s words. After getting married, they started living together near the pond itself. The pond was a confluence of two different rivers, Bahu Mukhi Ganga and Dudh Mukhi Ganga.  One day, the princess was out in search of food and, while waiting for his wife, the disabled man noticed a grasshopper with no limbs jumping into the pond and coming out of it all healed. Wanting to test the magical powers of the water, he asked the villagers to push him into the pond and he too came out healed. Ever since then, people have believed that bathing in that pond will heal all ailments and make your wishes come true. Being grateful for such miracles, the people there built a temple for Goddess Sapana Tirtha, a name given to a Goddess who made dreams come true.

This year too, Tokha residents are already preparing for the festival. While the youths are practicing for the concerts to be held during the festival, the elderly people of the village are taking care of the rituals. There is even a ‘guthi’ in place with more than 100 members who are managing the logistics of the festival. They will also be responsible for managing the crowd on the main day of the festival with help from police officers, scouts, and local club members.

The preparations begin three days prior to the main day on Baisakh 1. The temple vicinity including the pond is cleaned and the statue of Goddess Sapana Tirtha is placed there, following which no one is allowed to go near the temple, not even insects and birds. In the past, the locals used to block the junction of the two rivers so as to maintain the water level in the pond throughout the festival. However, in the past few years they have had work done to preserve water in the pond.

“Though the river currently seems dry, the water level increases during the rainy season. So, the construction was necessary to protect the temple as well as the houses nearby. It is also easier for devotees to take a holy bath when the water level is maintained like this,” shares Lal Bahadur, another resident of Tokha. He further adds that, in case there is less water in the pond, more water is brought from a borewell set up at the junction of the rivers.

Earlier, people used to bathe in the pond only after sunrise. However, in the recent years, due to increasing number of devotees turning up at the festival, people gather at the site from midnight and wait for their turn. This apparently continues for 24 hours till the following midnight. While some visit Tokha to worship the Goddess and have their wishes granted, others use this opportunity to explore the cultural beauty. Believing in the myth, many people also gather hoping they can give birth to a son or heal themselves after taking a dip in the pond.

Suntali Dangol, who lives in Tokha, has been celebrating Sapan Tirtha Mela ever since she can remember. She was taught to fast on this day when she was just a little girl and still follows the ritual. However, she says it might be because of her own experience rather than what she was told when she was a child that she values the festival and holds it in high regard.

“Years ago my son had severe allergies and he had lumps all over his body. No treatment worked and so I took him for a holy dip in the pond. A few days later, his allergies subsided and he got better,” she says adding that she doesn’t understand how it happened but believes it is people’s belief in the Goddess and the site and its significance that miracles continue to happen. “The pond gives us hope,” she adds.

While there are skeptics in Tokha too, there is no denying that the pond holds immense cultural significance for all of them. According to priest Dangol, this particular festival and ritual has also contributed in promoting domestic tourism in the area. And more efforts are being made to propel this further.  “This year we will be coming out with a book on Sapan Tirtha Mela and its glorious history. Many new hotels are also being constructed in order to attract more tourists. The community is also planning to host fairs and religious events,” he concludes. 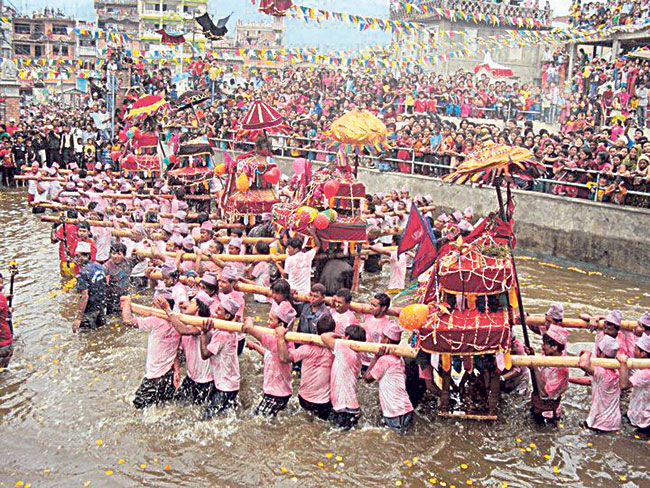 KATHMANDU, Nov 1: Police have arrested three individuals on the charge of allegedly stabbing a youth to death at Devi... Read More...

KATHMANDU, July 26: With time, the stern association between a teacher and student eases into a friendly bond.  The gradual development... Read More...

The weaver bird (or Baya Topchara as it is commonly called in Nepal) is also known as the engineer charo... Read More...