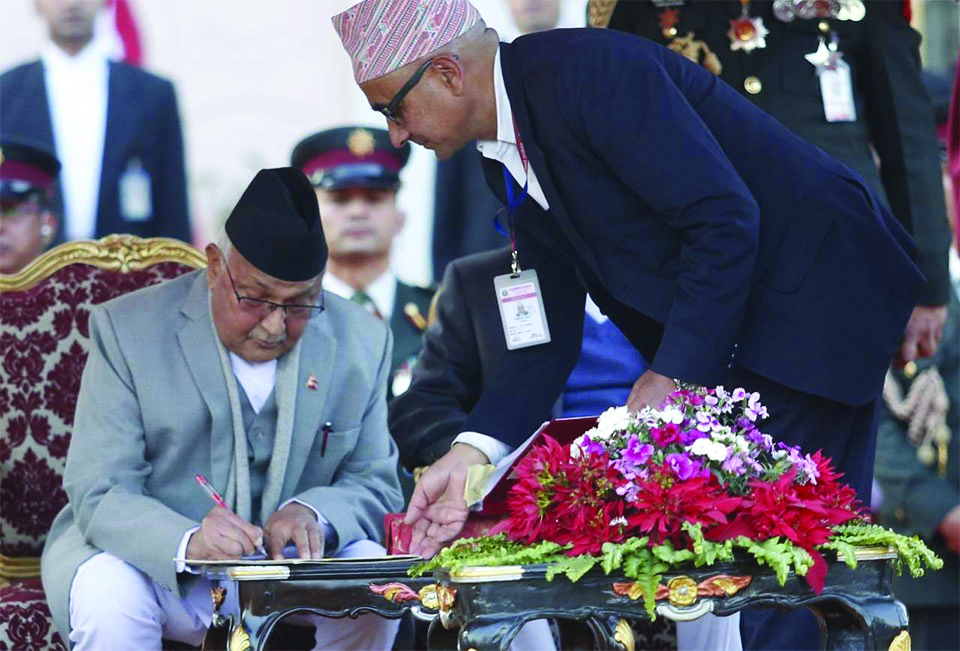 A government that lasts for full five years could do a lot to take the country to the new direction. But how should it start and where from?

Since the 2006 People’s Movement, Nepal is in limbo irrespective of whichever party is in power. Partisan politics, political wrangling and gridlock continue for selfish interests of both leaders and their cadres. Let that sink in.

After the downfall of monarchy in 2008, there was a wave of optimism that the new government would enhance nation’s developmental agendas. But hypocrisy, incompetence and vested interests of post-2006 governments not only shattered basic norms and principles of democracy, but also compromised development. The country has had a spell of ten prime ministers in mere nine years. The political influx worsened the economy with depressing figures in GDP, per capita and Human Development Index (HDI).

Things appear different after the recent elections.  Nepali people gave nearly two third majorities to the left parties mandating them to form the government and now we have the government led by K P Oli.

Formation of left alliance and merger between CPN-UML and Maoist Center (which is imminent) could start process for a steady two-party system. Government’s longevity could resurrect stability and accommodate people’s aspiration for development. A government that lasts for full five years (which has never been possible since 1950) could do a lot to take the country to the new direction.

But there are so many things to do. How should the government start and where should it start from?

Instant reform is needed in the education sector. Consider the fairytale story of Singapore that was in ruins during the British and Malaysian colonialism. Despite being in economic shambles for a long time with low per capita income, illiteracy and high unemployment, Singapore later transformed into one of the world’s richest countries. Their success story has fascinated many developing nations.   Pool of educated citizens and rich manpower helped the nation prosper.

Same with India. It experienced reformative decades after it embraced the British education culture since 1947. Growth in education began to generate highly skilled manpower that was capable of engineering economic miracles. It helped them revive their economy with higher employment rates, per capita income and GDP.

Nepal also needs to put education in topmost priority. According to the National Census report, Nepal’s literacy rate stands at 65.9 percent with a slothful average annual increase of 1.18 percent since 2001. If these numbers can be improved in the next five years, there is a good chance of having prolonged economic growth.

Foreign Direct Investments (FDIs) should be the second priority for KP Oli’s government. Take China. Their opening up and reform program since 1978 made their country a lucrative investment platform. One of their main success drivers was the triumph of Special Economic Zones (SEZ) and industrial clusters. In mere 30 years period, China managed to achieve unparalleled economic wonder with a nine percent growth rate, becoming world’s second-largest economy.

In the same way, Singapore made tremendous stride in their economic growth through FDI. They encouraged investments, mainly from the US and Japan by ensuring political stability. Just after seven years since Singapore’s independence, there were more than one fourth of the foreign firms. This acted as a stepping-stone for more foreign investment. Right now there are more than 3000 multinational corporations in Singapore.

Nepal can produce better economic results through foreign investments. Political instability had made the situation worse in Nepal. Asian Development Bank estimated that Nepal had only 0.3 percent of FDI inflow out of its $22 billion GDP in 2017. This indicates how far we have lagged behind in making the country investable.

Besides, the new government should prioritize on production and trade exports. Many LDCs like ours have clawed their way to economic prosperity by producing goods where they have an absolute or comparative advantage. For instance, Botswana, a landlocked country like Nepal, transformed itself from being the poorest to a middle-income country in a decade by trading precious metals. Most of their businesses engage in mining diamonds, gold, uranium and copper. The nation now has fourth highest gross national income in Africa with living standard at par with Mexico.

Thailand boosted its economy through tourism. In the last two decades, its tourism has grown rapidly. Tourism contributed 17 percent of its total GDP, totaling $79 billion in 2016. Since tourism is their main pillar, it bolstered their service sector, attracted more multinational companies and created high economic activity.

Like Botswana and Thailand, Nepal can profit from the export-oriented production of electricity and promotion of natural resources through tourism. Ironically, at present, we are importing energy. Tourism holds a good prospect for us. Its contribution of 10.2 percent to GDP shows this contribution can be increased further.

The government must also focus on conserving its human resources. So far, the nation is bleeding good brains to other countries. There has been outbound student mobility for the past decade. According to the Ministry of Education, 48,000 students left the country in 2016. If we don’t take proactive steps to stop this, not only will we join Ethiopia, Nigeria, Iran and Kenya in the list of countries having highest brain drains but also will be ruled by incompetent people.

If we are to learn lessons from success of other countries, they should be basically these two. First, simple fundamental contributors such as education, foreign direct investment and trade help developing nations break free from clutches of economic failure. Two, it does not take long for a country to progress if fundamental contributors are maintained intact. Singapore, an underdeveloped country 50 years back had per capita income less than $320. Now their per capita income is $60,000. China, that once endured famine before the opening up policy, now have GDP of $11.2 trillion.

People want to see positive change from the actions of new government. Hopefully, a fresh start will materialize. The new government has the opportunity to chart country’s future for the next two decades. How they perform in coming five years will decide where they will take us, or whether they will be able to take us anywhere at all.

The author is MBA candidate at Asian Institute of Technology (AIT), Thailand

KATHMANDU, June 13: Nepal is all set to start its AFC Asian Cup 2019 Qualifiers match against Yemen with two... Read More...