Syrians gather in capital in defiance after airstrikes 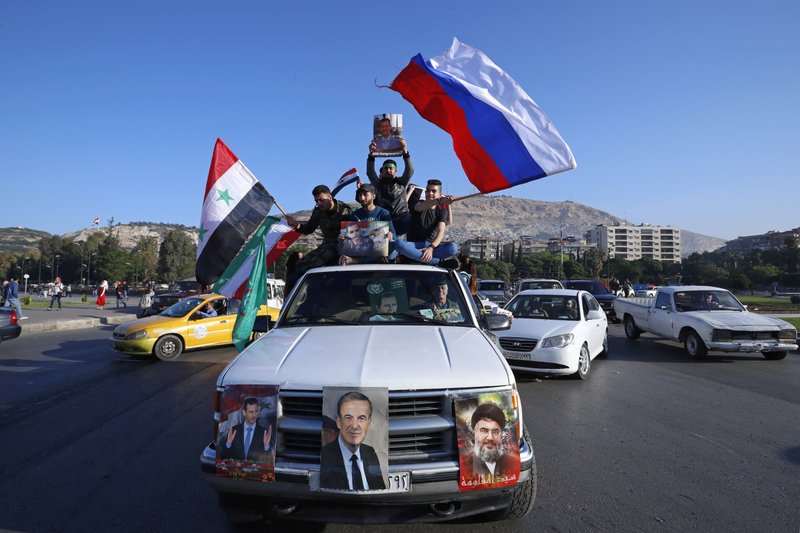 Associated Press reporters saw smoke rising from east Damascus and what appeared to be a fire lighting up the sky. From a distance, U.S. missiles hitting suburbs of the capital sounded like thunder. Shortly after the one-hour attack ended, vehicles with loudspeakers roamed the streets of Damascus blaring nationalist songs.

“Good souls will not be humiliated,” Syria’s presidency tweeted after the airstrikes began.

Immediately after the attack, hundreds of residents gathered in Damascus’ landmark Omayyad square, celebrating what they said was the army’s success in shooting down or derailing some of the missiles. Many waved Syrian, Russian and Iranian flags. Some clapped their hands and danced, others drove in convoys, honking their horns in defiance.

“We are not scared of America’s missiles. We humiliated their missiles,” said Mahmoud Ibrahim, half his body hanging outside his car window, waving a Syrian flag. The crowd then moved toward the nearby Damascus University where pro-government fighters danced, waving their automatic rifles over their heads.

U.S. President Donald Trump announced Friday night that the three allies had launched military strikes to punish Assad for alleged chemical weapons use and to prevent him from doing it again. Trump said Washington is prepared to “sustain” pressure on Assad until he ends what the president called a criminal pattern of killing his own people with internationally banned chemical weapons.

The Syrian government has repeatedly denied any use of banned weapons. A fact-finding team of inspectors from the international chemical weapons watchdog was in Damascus and had been expected to head to the town of Douma on Saturday, scene of the suspected chemical weapons attack that killed more than 40 people.

The seemingly limited strikes with no apparent future strategy for how to deal with the wider civil war was a cause for relief and celebration by Assad supporters but criticized by the Syrian opposition.

Mohammad Alloush, spokesman for the Army of Islam rebel group, called the airstrikes a “farce” in a Twitter posting. Nasr al-Hariri, a senior opposition leader, said Syrians need a strategy that leads to a political solution to “save it from the brutality of the Syrian regime.”

Al-Hariri, in a tweet, suggested the strikes send the wrong message that while it is not OK to use chemical weapons, the Syrian government can continue to “use explosive barrels and cluster bombs.”

A Syrian military statement said in all, 110 missiles were fired by the U.S., Britain and France and that most of them were shot down or derailed. Russia’s military said Syrian air defense units downed 71 out of 103 cruise missiles launched by the U.S. and its allies.

The Syrian statement read by Brig. Gen. Ali Mayhoub said three civilians were wounded in one of the strikes on a military base in Homs, although the attack was aborted by derailing the incoming missile. He said another attack with “a number of missiles” targeting a scientific research center in Barzeh, near Damascus, destroyed a building and caused other material damage but no human losses. Mayhoub said the building housed an educational center and labs.

The attack began at 4 a.m. (0100 GMT) with missiles hitting the eastern suburbs of Damascus, shaking the grounds from a distance. The sky looked orange over eastern Damascus, apparently as a result of fires. Air defense units fired surface-to-air missiles from different directions toward incoming missiles.

At about sunrise, the sound of explosions could be heard just as the loudspeakers from the city’s mosques called for morning prayers.

A car with loudspeakers blaring the national song “Oh Syria, You Are My Love” could be heard driving through central Damascus during the attack.

U.S. Defense Secretary James Mattis said there were no reports of U.S. losses during the initial airstrikes.

“Right now this is a one-time shot,” he said but did not rule out further attacks. He said the airstrikes were launched against several sites that helped provide Assad’s ability to create chemical weapons.

France’s foreign minister said the “chemical escalation” in Syria is not acceptable because it violated the rules of war and of humanity. Jean-Yves Le Drian told reporters Saturday that the joint military operation in Syria is legitimate, limited and proportionate.

British Prime Minister Theresa May described the attack as neither “about intervening in a civil war” nor “about regime change” but a limited and targeted strike that “does not further escalate tensions in the region” and does everything possible to prevent civilian casualties.

The decision to strike, after days of deliberations, marked Trump’s second order to attack Syria; he authorized a barrage of Tomahawk cruise missiles to hit a single Syrian airfield in April 2017 in retaliation for Assad’s use of sarin gas against civilians.

Trump chastised Syria’s two main allies, Russia and Iran, for their roles in supporting “murderous dictators,” and noted that Russian President Vladimir Putin had guaranteed a 2013 international agreement for Assad to get rid of all of his chemical weapons. He called on Moscow to change course and join the West in seeking a more responsible regime in Damascus.

Iran’s Supreme Leader Ayatollah Ali Khamenei said that the attack on Syria was a “crime” and declared the leaders of the U.S., France and the U.K. “criminals,” according to Iran’s state-run IRNA news agency. The Iranian Foreign Ministry strongly condemned the strikes and warned of unspecified consequences.

Russia’s U.S. embassy released a statement warning that the airstrikes will “not be left without consequences.” It said that “all responsibility” rests with Washington, London and Paris.

The U.S. missile strike in April 2017 was meant to deter Assad from further use of chemical weapons. That operation targeted the airfield from which the Syrian aircraft had launched their gas attack. But the damage was limited, and a defiant Assad returned to episodic use of chlorine and perhaps other chemicals.

Friday’s strikes were aimed to degrade his ability to carry out further such attacks. The Pentagon’s Gen. Joseph Dunford said they a scientific research center in the Damascus area that was involved in research, development, production and testing of chemical and biological warfare technology; a chemical weapons storage facility west of Homs he said was believed to be the main site of Syrian sarin production equipment; and a chemical weapons equipment storage facility and an important command post, also west of Homs.

POKHARA, Jan 17: The capital expenditure has reached only 11 percent so far in the current fiscal year. ... Read More...

Analysis: Scientists ask whether Omicron can outrun Delta
12 hours ago

Worldwide screening of '14 Peaks, Nothing Is Impossible' based on Nirmal Purja's biography
5 hours ago

UML General Convention: Voting begins at 4 AM
7 hours ago