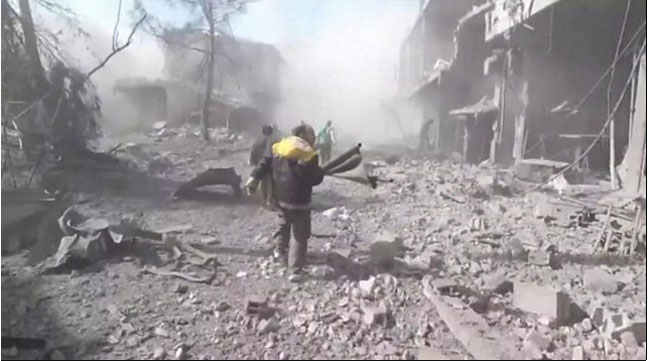 Photos posted by activists showed over a dozen bodies wrapped in shrouds.

The bloodied corpses of five children, purportedly siblings, could be seen in another image.

Pro-Syrian Government media outlet Al Masdar news reported that Syrian warplanes had delivered "dozens of airstrikes within a matter of hours" on Ghouta.

The online news agency also said that the heavy bombardment "comes as the Syrian Army makes its final preparations for a massive ground offensive against armed rebel factions — to be the largest ever conducted within the vicinity of the Syrian capital — from multiple directions".

The UN humanitarian office in Syria tweeted that the attacks had killed more than 40 civilians in Ghouta.

"There have been daily reports about civilians being killed and others being severely wounded, in addition to warehouses, hospitals and schools being damaged or destroyed," regional UN humanitarian coordinator for Syria Panos Moumtzis said in a statement late on Monday.

"Many residents have had little choice but to take shelter in basements and underground bunkers with their children.

"The recent escalation of violence compounds an already precarious humanitarian situation for the 393,000 residents of East Ghouta.

"The humanitarian situation of civilians in East Ghouta is spiralling out of control. It's imperative to end this senseless human suffering now.

Eastern Ghouta falls under ceasefire plans for rebel territory that Russia has brokered with the help of Turkey and Iran.

Residents and aid workers say the "de-escalation" deals have brought no relief. Food, fuel, and medicine have dwindled.

Russian Foreign Minister Sergei Lavrov said on Monday that Moscow and its allies could "deploy our experience of freeing Aleppo … in the eastern Ghouta situation".

With support from Russia and Iran, Damascus regained full control of Aleppo city in late 2016, after years of fighting and months of siege ended with a bloody insurgent retreat.

The United Nations said last week that civilians in Syria were suffering through some of the worst fighting of the entire conflict, which is entering its eighth year.

The war has killed hundreds of thousands of people and driven millions from their homes.

Renu Dahal leading by more than 5,000 votes in Bharatpur metropolis
7 hours ago