Sword believed to be from Anglo-Nepal war found in Rautahat 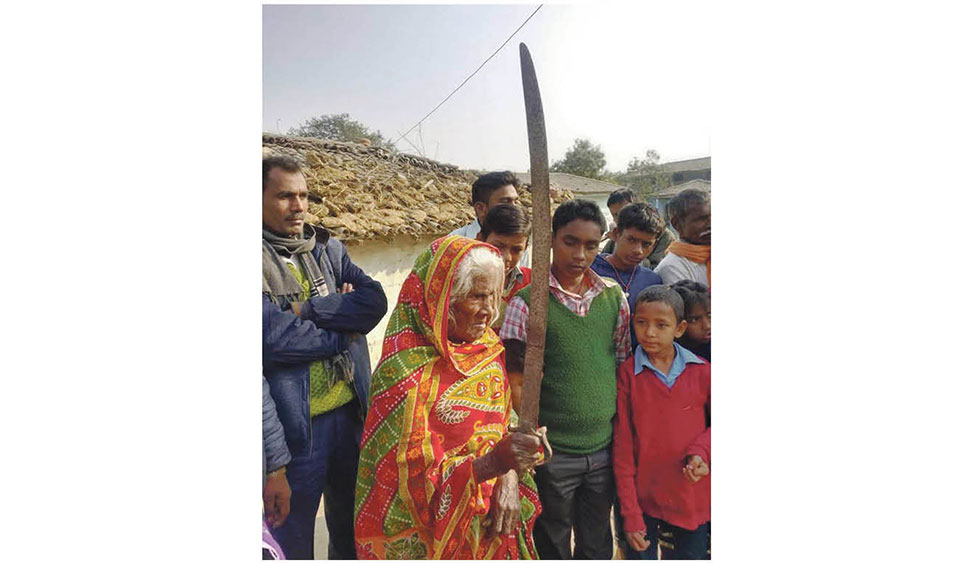 PIRITIYA DEVI RAUT OF SAMANPUR IN GADHIMAI MUNICIPALITY, RAUTAHAT HOLDS A SWORD THAT LOCALS BELIEVE WAS FROM THE ANGLO-NEPAL WAR OF 1814-1816 AD, AT HER HOME LAST WEEK. THE SWORD IS FOUR FEET LONG AND WAS FOUND BY RAUT IN A HISTORIC POND NEAR HER HOUSE A FEW DAYS AGO. THE MAYOR OF THE GADHIMAI MUNICIPALITY GAVE RAUT RS 2,000 AS A REWARD AND TOOK THE SWORD FOR SAFEKEEPING AT THE MUNICIPALITY. PHOTO: MADAN THAKUR/REPUBLICA

RAUTAHAT, Jan 1: Locals of Samanpur in Gadhimai Municipality, Rautahat district are excited after unearthing of an ancient sword, which they believe could have been used by Nepali soldiers fighting the British troops during the Anglo-Nepal war nearly 200 years ago.

The recovery of the four feet long iron sword got hyped after officials from the Indra Box Battalion of Nepal Army visited the site and started studying its origin. Locals have queued up to take a look at the rusty old sword that is likely to carry historic significance if the claim is established.

Nepal and Great Britain fought the war from 1814-1816 AD when the East India Company of the British empire sought to expand its territory beyond India. During one instance, Nepali soldiers and the locals of Samanpur are said to have used swords like the one recovered to defeat the British troops camped in the Nepali territory.

The pond from where the sword was recovered has a historic significance. Nepali soldiers aided by the locals had attacked the camp of the British troops in Samanpur when they were celebrating New Year on December 31, 1814. According to historians, Captain Sarwajeet Thapa had led 1,200 soldiers in a fight against the British at Samanpur.

The Nepali forces succeeded in killing high-ranking British soldiers and also captured British weapons including a canon. They dumped the dead bodies and weapons in a pond of Samanpur-1 from where the recent sword was recovered.

The ancient sword was found by Piritiya Devi Raut, 99, from the pond which is in front of her house. It is said that her father-in-law had earlier recovered many small swords from the pond but they were lost over time in lack of preservation.

Gadhimai's Mayor Shyam Prasad Yadav felicitated the elderly woman with Rs 2,000 for handing over the weapon of historic value to the local authorities.

Mayor Yadav assured that the local government would preserve Samanpur's history and develop it as a tourist destination with necessary help from the federal and provincial governments.

Child missing after falling into sewer at Kapan

KATHMANDU, Sept 22: A child has gone missing after falling into a sewer at Kapan of Kathmandu. The incident happened... Read More...

MUGLING, Sept 22: Traffic on the Prithvi Highway that was disrupted following a landslide at Ghoptebhir of Chitwan has resumed... Read More...