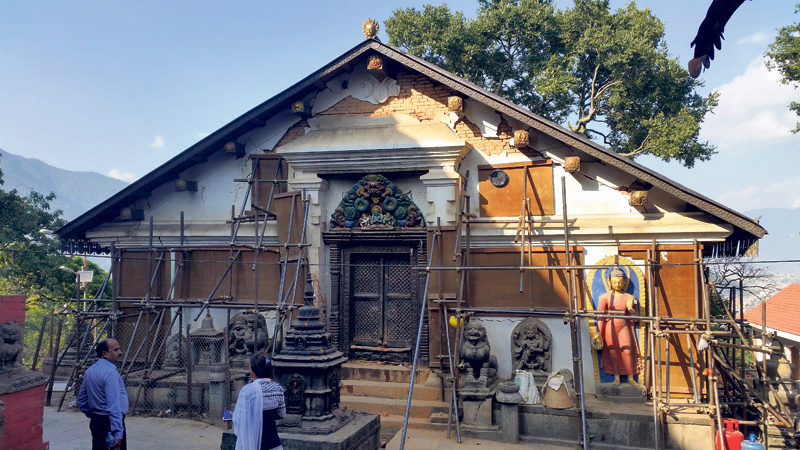 Buttresses support the walls of the Shantipura temple, which was damaged in last year’s earthquakes, on the premises of Swayambhunath. Photo Courtesy: Tenzn Tsomo

KATHMANDU, Oct 29: The reconstruction of temples around Swayambhunath stupa, one of the renowned Buddhist shrines and a UNESCO World Heritage Site, still remains neglected even after more than a year and a half since the massive earthquakes.

Anantapur and Pratapur temples, situated on either side of the Swoyambhunath stupa, have sustained major damages.

Pratapur stands with support of wooden and iron rods while Anantapur, which was broken into half, has been kept covered by corrugated zinc sheets.

“We are contributing to the restoration project, however possible. But the government has to provide assistance in reconstructing the major structures like Anantapur and Pratappur as we do not have resources to carry out all these activities," said Sarbagya Ratna Tuladhar, the president of the Federation of Swayambhu Management and Conservation.

"Our federation also managed resources for the restoration of 17 minor structures including chaityas, paatis, mandirs etc on the premises of Swayambhunath," he added.

The federation was involved in providing immediate relief to locals, mainly gubaju priests after the earthquake.

There are around 20-22 households of the priests around the main stupa. These priests are the caretakers of the stupa and also perform the daily rituals.

The government had promised to provide Rs 300,000 each to those whose houses were damaged by the earthquake. But the priests who have been staying there have not yet received the promised amount.

The Department of Archeology has been coordinating with the federation regarding restoration and reconstruction projects at Swayambhunath. The DOA is to assist in rebuilding Anantapur and Pratappur, the 17th century white-walled temples.

Contrary to the claims of the federation that the government has yet to take any decision on the rebuilding project, the DOA said that it started reconstruction work at Swayambhunath a month ago.

"We have already started reconstructing Anantapur. Once that is completed, we'll work on other structures," Ram Bahadur Kunwar, DOA spokesperson said.  According to him, it will take around three years to completely restore Swayambunath.

The two Buddhist monasteries at the top of the hill were also badly damaged. Apparently, there is nobody to look after the reconstruction work at the Karma Raja Maha Vihar. According to locals, the concerned members of the monastery have gone abroad after hiring a local engineer to take care of the rebuilding process.

The other monastery, Dev Dharma which is also known as purano gumba to the locals, claims that they have repeatedly asked for approval from the DOA to begin the reconstruction work.

"We were informed by the DoA that we can't use ordinary construction materials for the new building, which we accepted. But the DOA has yet to approve our plan for the new monastery. They have been delaying reconstruction work by not approving our plan.

Hopefully, we can start reconstruction work after Tihar," said Lama Tendar, a representative of the monastery.

In the meantime, individuals even from foreign countries have shown interest in Swayambunath's reconstruction. According to the federation, it has teamed up with Dirk Wittler, a structural engineer from Germany, to restore the Shantipura temple.

Wittler and the members of the federation had inspected the temple on Tuesday. The engineers of the federation, Mani Ratna Tuladhar, Jai Bahadur Maharjan and Siddhi Kumar Awale are going to meet Wittler again on Friday to finalize the plan for restoration.

Accroding to Mahendra Ratna Buddhacharya, the general secretary of the federation, the stupa's location has made the reconstruction work difficult. Since the motorway ends far below the site, they have to hire people to carry construction materials all the way to the top of the hill. Moreover, they have to use only materials approved by the DOA, which is hard to get in our market these days.

"But these are minor problems. What is more difficult is getting approval and assistance from the Department of Archeology. They haven't provided a final decision on the reconstruction of Anantapur and Pratapur, according to Buddhacharya.

KATHMANDU, Oct 28: The reconstruction of temples around Swayambhunath stupa, one of the renowned Buddhist shrines and a UNESCO World Heritage... Read More...

KATHMANDU, Jan 21: Nepal has found itself in a difficult position, with India including a caveat in the use of a... Read More...

UML Chair Oli contracts COVID-19
41 minutes ago
Moderate snowfall, rain predicted in most parts of Nepal till Monday
45 minutes ago