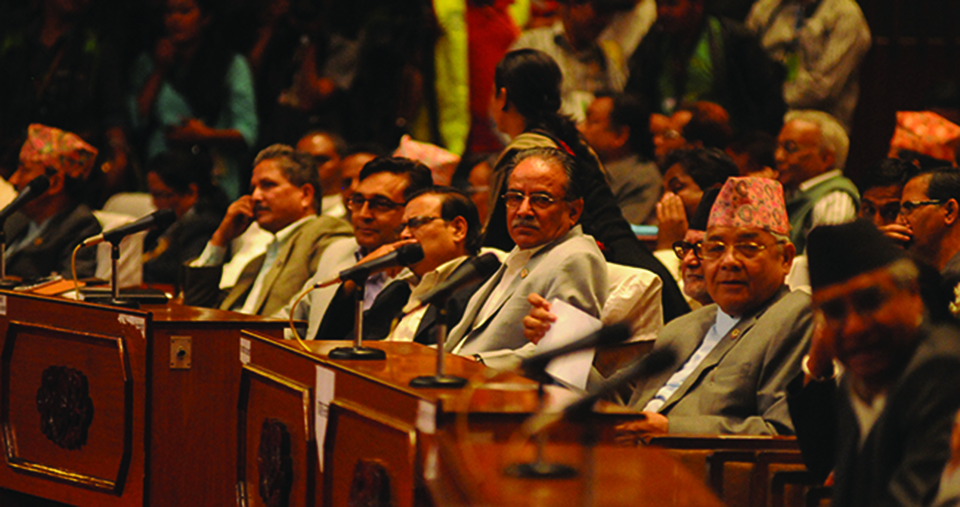 Regardless of great changes, if mentality, mindset, practices and behavior of our leaders remain the same our democracy will be in trouble

Multiparty democracy based on periodic elections, proportional inclusive representation, independent judiciary, free media, rule of law, good governance, social equity and economic equality are some of the core democratic values ingrained in constitution of Nepal. But coming to this stage was not easy. The beginning of 21st century was difficult for our democratic journey. We brought it back on track after the end of decade-long conflict by brining the rebels within the democratic framework, ending the authoritarian rule of the then king, holding two Constituent Assembly elections, writing an inclusive constitution and thereby transitioning from monarchy to republic, non-secular to secular state, and unitary to a federal structure.  We conducted three levels of election with the agenda for stability and prosperity and elected 761 governments that are functioning. These are no small feats.

Key democratic institutions are in place. And so are required legislations to ensure democratic governance. Some of the indicators such as inclusivity, participatory processes, and human rights are moving in positive direction. We have a vibrant civil society as a strong watchdog of democracy.

However, our experience in governance is frustrating, particularly in some of the core areas such as rule of law, transparency and accountability. Freedom House report 2018 writes about Nepal: “Corruption remains endemic in politics, government, and judicial system and the government generally operates with opacity.” Moreover, we rank 33rd in most fragile state. These do not point to supportive environment.

Yes, we have one of the most democratic and inclusive constitutions but how we implement this constitution remains to be seen. There are a few issues which could be taken as both challenges and opportunities.

For one, there has been no universal acceptance of the constitution. Some sections of the society deemed it discriminatory and are still protesting. Interestingly, the political parties representing the same groups are either in the government or supporting it from outside. Leaders who were reluctant to accept the federal system during constitution writing process are now leading its implementation process. Political party that opposed parliamentary democracy is now leading the parliament. These are encouraging trends.

Our constitution is a document of compromise and has some contradictions. For example, the constitutional goal is to achieve socialism, but it does not specify which type: communist or democratic socialism. Now the provinces and local levels have their own parliaments and governments to best serve the people. But initial stages of implementation of federalism have not been very encouraging. The actors in central government still seem to be guided by unitary mindset. Only time will tell how our political leadership will address these flashpoints and avert the possible crisis that may threaten democratic path.

Key strength of democracy lies in the quality, capacity, credibility and proactiveness of democratic institutions such as parliament, judiciary, political parties, media, and other watchdogs, which are the pillars of democracy.

Democracy thrives when institutions, systems, and practices are established and people trust them. But various surveys indicate that most of our democratic institutions are losing public faith.

The rule of law, access to justice and a strong, independent, capable and efficient judicial system are critical elements of a resilient democracy. In difficult times, our court has saved our democracy. But, recently, we have observed that these institutions are eroding fast and failing as a custodian of democracy. Over politicization of judiciary deserves most of the blame. Judges, members of judiciary or other commissions are often appointed based on political loyalty and group loyalty rather than meritocracy and competence. Right after taking oath of office, if judges pay visit to the political parities they are affiliated to how can such practices contribute to maintaining credibility and impartiality of judiciary?

Nepal has held elections for the past several decades with high voter turnout. Power is transferred peacefully through an electoral process, and the elected bodies have been inclusive and representative. There has been no major post electoral violence but in the recent years our electoral results are being stolen by four Ms—money, muscle, materials and media. For instance, during the last election, several genuine and honest political leaders were denied candidacy because they simply could not compete with candidates with money and criminal backgrounds.

Political parties are instrumental in ensuring that institutions are inclusive, responsive and democratic. Political parties in Nepal have unique characteristics. One minute, they will be fighting in the streets, and the next minute, they will be sitting around a table working towards a common solution.  But lack of good governance in political parties is a major issue. They are neither inclusive, nor transparent. Party structures are strictly hierarchical and male-dominated and leadership positions are mostly held by elites from select ethnic communities. Party leaders are not even held accountable for their failures.

Our leaders have always remained committed to democracy. Some of them have sacrificed the prime years of their lives, properties, and families for the sake of democracy. But their performance in managing democratic change has not been satisfactory at all. This is the main reason why every ten years we witness major political upheavals.

Like in other parts of the world, faith in democracy is being ruined by undemocratic mindsets of leadership. Our political leaders try to hang on to power. In the last three decades, we have in the scene the same ten to 15 leaders from the same political parties grabbing and hoping to grab the prime ministerial post. These leaders, all male, with the same ethnic background have been running the show. Widespread public mistrust of political leadership stems from corruption, and misuse of state power and resources. Their image is further tarnished by the corroboration of organized crime within the political ranks. The public opinion of “we removed one king but now hundreds of mini kings are running the show” manifests frustration against the leaders.

Regardless of great changes, if the mentality, mindset, practices and behavior of our leaders do not change, our democracy will be in trouble. As we are in the digital age, technology is transforming life and power relationship is changing. It poses both opportunities and threats to democracy. To address them, a completely new outlook, vision and processes are needed. The future of democracy mainly lies on how much our political leadership will be able to understand and address it.

Nepal continues to be in perpetual transition with fragile political stability. As a result, democracy is at risk. Leadership and government should timely address such flash points to ensure we remain on a peaceful democratic path and be focused on improving delivery. Political parties need to address public distrust by pledging transparency of party finance, regulating conflict of interest, implementing anti-corruption policies, enforcing internal party democracy, ensuring inclusive and representative mechanisms within and outside of the parties, and applying new approaches to citizen engagement.

Democracy can’t flourish in poverty, poor governance and weak institutions. The government should prioritize strengthening institutions, systems and good practices to ensure the rule of law and good governance to create an enabling environment for equity, justice and development.

To conclude, let me cite what two Harvard professors Steven Levitsky and Daniel Ziblatt wrote in How Democracies Die- “if there is any danger for democracy, it is not from other corners but from the elected leaders.” It’s so in Nepal as well.

The author is former Chief Election Commissioner of Nepal

KP Oli’s tendencies are wholly and growingly anti-democratic. He seems to hold no conception that an MP’s power to vote... Read More...

JERUSALEM – If any Western country is suffering from democratic dysfunction, it is Israel. With the country’s political leaders having... Read More...

While in opposition communists make nationalism their sole agenda. When they lead the government they tend to attack democracy... Read More...

Kathmandu Valley begins dumping its waste at Banchare Danda landfill site
8 hours ago
Transport fares hiked from Tuesday, the second time in a week
9 hours ago