Movie critic Dipendra Lama believes the movie Loot, which hit cinema theaters in 2012, introduced some groundbreaking features and techniques in the entertainment business. It changed the entire dynamics of filmmaking in our country making audiences look forward to a new Nepali release. Yet, Lama also believes that the same movie also became a huge setback for the industry.

“After Loot, the Nepali film industry tried to replicate its success and only came up with similar and repetitive content. There was a lack of substance and creativity. While the technical aspects of Nepali movies might have improved after Loot, the creative aspect was clearly on the back burner,” says Lama.

According to actor Deepak Raj Giri, if a movie does well in the box office today, every other filmmaker tries to copy that idea. He thinks one of the main reasons why Nepali movies have not been able to make their mark internationally is because of lack of vision among our directors and producers.

Critic Lama calls this state the ‘fast food phenomenon’. Referring to directors and producers in Nepal, he says most of our filmmakers are only interested in making fast money. If they feel a certain kind of content attracts audiences easily, they will produce only those types of movies. “This might bring in easy money but, in the long run, there will be a lot of repercussions to deal with,” he says.

Typecasting is another huge problem that our industry faces. Most actors repeatedly play similar kinds of roles depending on their appearance and previous successes. Lama says although those glorious years of Rajesh Hamal being the all-powerful hero may have come to an end, our industry has now conveniently produced another protagonist, Dayahang Rai.

However, Rajesh Gongaju, president of Kathmandu Film Society, disagrees with Rai. He believes that actors are also an integral part of filmmaking and they also need to experiment with their roles to come out as a unique character every time they are in front of the camera.

Gongaju feels that the main problem with Nepali cinema is not typecasting but the lack of connection between our directors and the public. He says Nepali stories these days only reflect urban Kathmandu and Pokhara but it’s the common stories that are hidden behind these overarching urban settings that connect with our people.

“Till date, our filmmakers have not been able to understand the level of sensitivity and the connecting points between them and their audiences,” says Gongaju.

According to him, we may not be able to compete with mega-budgeted industries such as Bollywood or Hollywood in terms of technology or grandiosity but what we can offer to the world is our unique stories. “Our lives, stories, and culture can make an important contribution in the international arena. But sadly we are not being able to explore our own stories,” says Gongaju.

Gongaju also feels that filmmakers try to create their stories in a vacuum. They lack experience, inspiration, and the willingness to actually connect with people. It’s important for filmmakers, director, and scriptwriters to travel and research but that’s often not the case. He believes that it’s only after a lot of research and interaction with the locals that a filmmaker can find the connection between their movie and the audience. 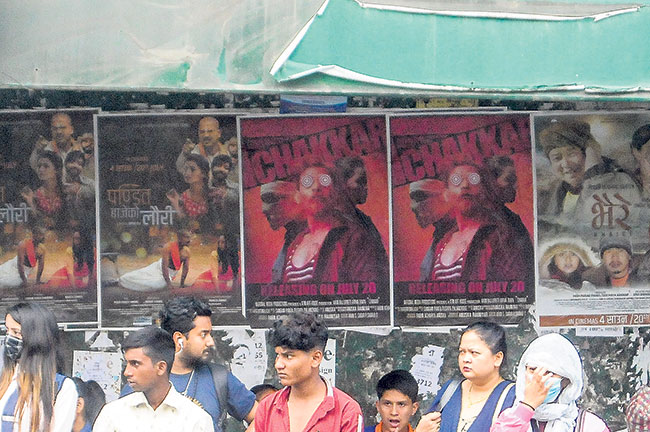 Rai also feels that there is a lack of preparation time given to the entire team while making a movie. “If the filmmakers have an idea, they implement it in less than two month’s time,” says Rai adding that two months is usually not enough preparation time for actors to understand their character and give in their best.

On a similar note, Rajkumar Pudasaini, actor and theater artist, feels that Nepali movies lack a realistic touch. He also feels that Nepali filmmakers don’t hesitate to spend a lot of money in publicizing the movie by compromising on its quality. “Marketing is an integral aspect of filmmaking but sadly, these days, the parties that are thrown for movie promotions are often more expensive than the entire process of filmmaking,” says Pudasaini adding that this culture where substandard movies are promoted by spending a lot of money can be very dangerous for the industry.

Though almost everyone in the industry seems to be blaming the directors, the directors have their own dilemma to tackle. Asif Shah, who is both, an actor and a director, says that over the years there have been dramatic improvements in Nepali movies. “You may have noticed that our industry has finally moved ahead from the story of a rich guy belonging to a so called high class falling in love with a poor girl. And that is a good thing that can only lead to more good things,” says Shah.

He believes that right now the Nepali film industry is in its experimentation phase. Filmmakers these days are coming up with different kinds of movies. “From Hari to Chakka Panja, there is a wide array of movies being produced every year,” says Shah. He is also of the opinion that the Nepali film industry cannot be compared to the advanced industries of the west because our industry is still in its infancy. Like in every other place, our film industry should also be given time to bloom and flourish.

But director Akash Adhikari accuses the lack of film-watching culture in Nepal for the substandard quality of Nepali movies that are being produced. “The larger the turn up the more interested producers will be in investing in the movies,” he says.

However, he also acknowledges the fact that this cannot be an excuse for releasing inferior quality cinema. Adhikari admits that there is lack of research and realism in the movies that are released in Nepal every year and that our industry needs some dramatic improvements in order to survive in the long run.

Shah agrees with Adhikari and says, “In the past few years, a lot of Nepalis have been attracted towards Nepali cinema. Now there is a need to maintain and uplift the standards by making better quality movies and expand our reach and prosper.