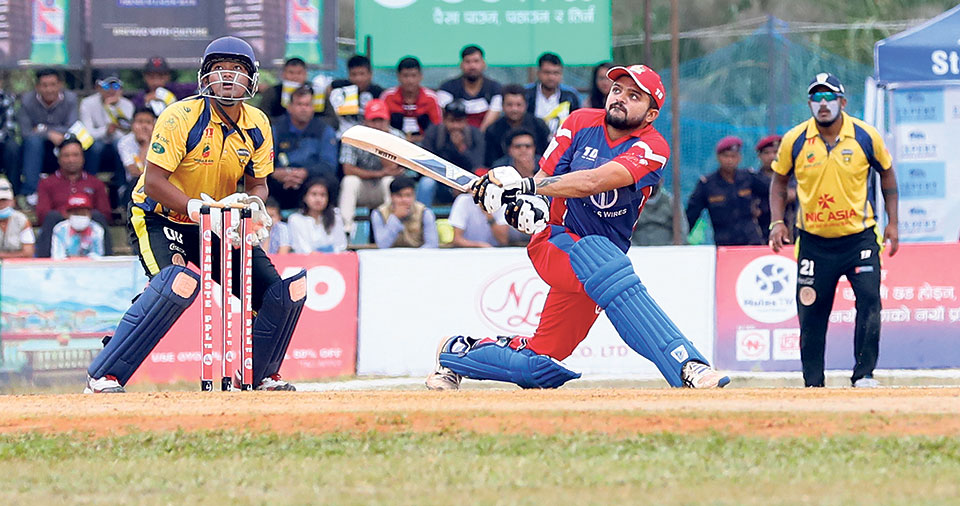 In the eliminator match played at Rangshaala Cricket Ground in Pokhara on Sunday, a three-wicket haul from Rhinos’ Sunny Patel limited Royals to a low margin score of 94 runs.

Captain Gyanendra Malla scored the highest 30 runs off 35 balls which included two fours for Royals, while he was supported by opener Jaykishan Kolsawala who scored 25 runs off 37 deliveries including two fours.

All other batsmen failed to reach the double figures, while three batsmen went out on ducks.

Amit Shrestha and Amar Singh Routela scored nine runs each, while Aadil Khan added eight runs before he was bowled out by Patel.

Likewise, Sushan Bhari hit three runs, while Gaurav Tomar and Naresh Budayair went back to the pavilion on one run each. Pawan Sarraf and Basant Regmi went out for a duck, while Nandan Yadav did not get to face a single ball.

Patel was the standout bowler of the match as he picked up three wickets giving away nine runs in his four-over spell with an economy of 2.25.

Likewise, Smit Patel and Bhuvan Karki pocketed two wickets each, while captain Khadka and Karan KC claimed a wicket each for the winning team.

In reply, it was all too easy for Rhinos to chase the game as it ended the game with 10 balls remaining on hand.

Smit Patel hit the highest 38 runs off 43 runs comprising of three boundaries in the game with a strike rate of 88.37. He was supported by 26 runs off 22 deliveries including a six and three fours from Harishankar Shah. Aarif Sheikh was the only other batsman who reached the double figures for Rhinos as he scored not out 20 runs off 32 balls with a four.

With the trio of Smit, Shah and Sheikh putting a total of 84 runs on the Rhinos’ total, it was not that difficult to win the game despite seeing captain Khadka go out for just two runs and Anil Kumar Sah hitting one. Sunny Patel added not out six runs off five balls with a boundary, while it got two runs from a wide and a leg by.

Despite seeing his side lose the crucial eliminator match, Bhari was the pick of the Royals bowlers as he picked up three wickets giving away 18 runs in four overs. Likewise, Sarraf was successful to nick a wicket, but the team was not good enough in both the batting and the bowling department to win the match.

Sunny Patel was adjudged the man-of-the-match for his performance with both the ball and the bat and also considering the fact that he hit a boundary to win the game for Rhinos.

In the group stages, Paltan had directly qualified to the final after finishing first with six points coming from three wins out of five. Rhinos finished second on the same number of points, but had a net run rate inferior to Paltan. Royals shared the same points with the two top teams.

Rhinos will now take on Paltan in the final match of the tournament on Tuesday.

The underappreciated beauty of PPL

POKHARA, Nov 6: The inaugural season of Pokhara Premier League (PPL) under the lap of the Himalayas caused many hearts throb... Read More...

POKHARA, Oct 27: Butwal Blasters will play against Chitwan Rhinos in the second match of the Pokhara Premier League on... Read More...

Chitwan supplying plasma to other districts
16 hours ago