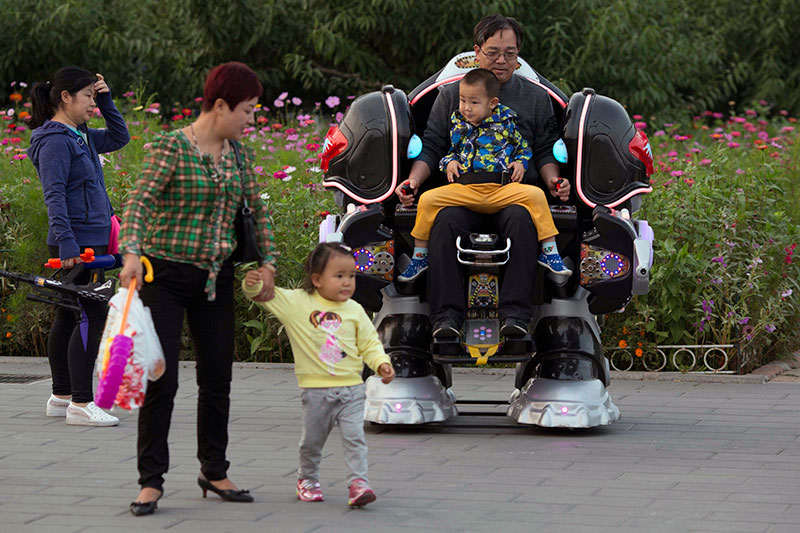 BEIJING, Oct 14: The loosening of China's one-child policy to allow all married couples to have two children will bring only a relatively small increase in population growth, a study predicted Friday, while recommending that the country increase its retirement age to address an expected labor shortage.

With 1.37 billion people, China currently has the world's largest population. It will peak at 1.45 billion in 2029, compared with a peak of 1.4 billion in 2023 if the "one-child" policy that restricted most urban couples to one child and rural couples to two if their first was a girl had continued, according to the study, published in the medical journal Lancet.

China brought in the policy in 1979 with the aim of limiting a surging population and promoting economic development. It was revised over the years to allow more couples to have an additional child, until the government allowed all married couples to have two children beginning this year, mainly to combat an aging population.

One of the study's authors, Zeng Yi of Peking University, said that it was the first such analysis to fully consider rural-urban differences and the effects of migration when quantifying the impact on population growth.

The study says it assumes that the total fertility rate, or births per woman, will rise from the current 2.01 in rural areas and 1.24 in urban areas to 2.15 and 1.67, respectively, in the next decade. That takes into account a lower socioeconomic level in rural areas and the fact that ethnic minorities are allowed three or more children. It estimates a combined total fertility rate of 1.81 in 2030.

Cai Yong, a demographer at the University of North Carolina at Chapel Hill who wasn't involved in the study, said he thought its total fertility rate projection of 1.81 in 2030 was "overly optimistic."

Lower fertility in China "is no longer a depressed result of restrictive policy," Cai said, adding that Chinese are likely to opt to pour their resources into just one "high quality" child instead of multiple children. They are also increasingly postponing or forgoing marriage and childbearing, he said.

"While no one has a crystal ball to see the future, we have ample empirical evidence to suggest that China's fertility will stay low after a small bump in the first few years of introducing one-child policy," Cai wrote in an email.

The Lancet paper's researchers in Britain and China say the effects of the new policy on China's shrinking work force and aging population won't be seen for two decades.

They recommend that the government increase "the exceptionally low compulsory retirement age" of 50 or 55 for women and 60 for men, increasing pension coverage and encouraging the traditional practice of three generations living under the same roof.

While authorities credit the one-child policy with preventing 400 million extra births, many demographers argue that the fertility rate would have fallen anyway as China's economy developed and education levels rose.

Over its 36 years of existence, the policy vastly inflated the ratio of boys to girls as female fetuses were selectively aborted in line with a preference for male offspring. China is predicted to have around 30 million more men than women by the end of the decade.

The policy also compelled many women to have forced abortions or give up their second children for adoption, leading to deep emotional scarring.

WASHINGTON, June 18: The emotional debate over separating immigrant parents and their children at the nation's southern border is getting some... Read More...