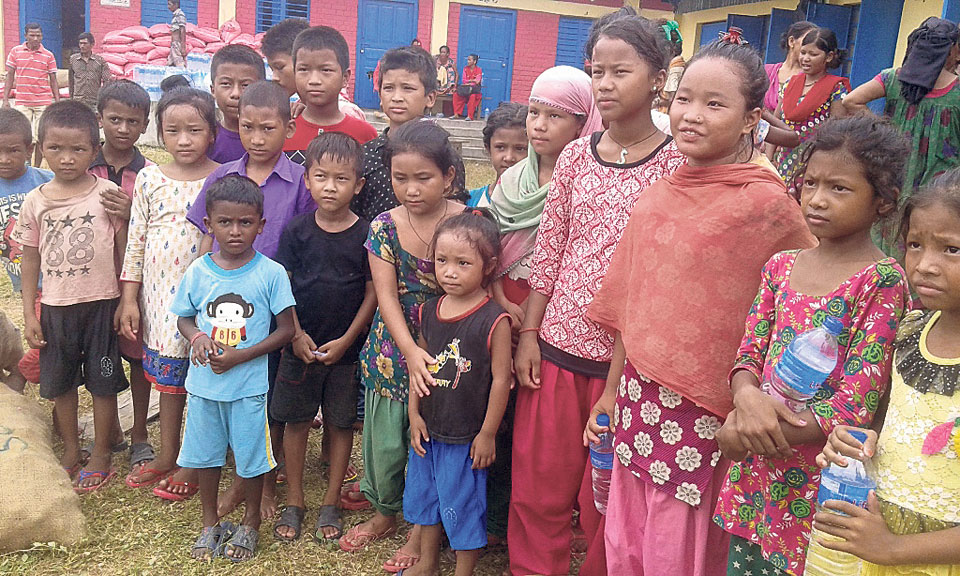 NEPALGUNJ, August 21: As the recent flood swept away his books, copies, and uniform, Ramesh Dangi of Rapti Sonari Rural Municipality-4, Lalpur is worried about his studies. As the schools have resumed after the floods, he is wondering how he will go to his school now.

He is a grade eight student at Dhampur based community school. "The teachers have already started teaching but I don't know how I will go to the school without books, copies, and uniform," he wonders.

After his home was swept away by the flood, Ramesh has been taking shelter at Janabhawana Primary School along with his mother and brother.

Similarly, Bhima Pun of the same village is going through the same ordeal. "The flood swept away everything and all my educational materials were buried," Pun said.

The stories of Ramesh and Bhima represent the problem of many students of this village. The flood had widely affected the settlements especially of Rapti Sonari, Daduwa, and Narainapur rural municipalities.  Hundreds of households of various wards of these rural municipalities were inundated by the flood.

Not just the food and other goods but even the educational materials of students were buried and washed away by the flood.

According to District Education Officer, Bhim Bahadur Saud, educational materials of a large number of students have been swept away by the flood in the affected areas. As per the preliminary data, around 25,000 students of Banke have been affected by the disaster, Saud said.

Still, many schools are yet to resume in the worse affected areas. As informed by Saud, all schools will compulsorily run by next week. As per the preliminary data provided by the District Education Office (DEO), 81 schools of the district were badly affected by the flood. Assistant District Education Officer, Gorakh Bahadur Thapa said, "By now we have heard no news of damage to school buildings.

However, some schools were waterlogged." He further said that the DEO will first collect the data by making door to door visits to the victims and then will provide necessary materials to the students as per their need.

Data collection will start from next week, according to Saud. The DEO will be distributing relief to the victims with the cooperation of other organizations.

RAJBIRAJ, July 26: A person was swept away during a flooding at Koiladi Basaini section of the Jita river in... Read More...