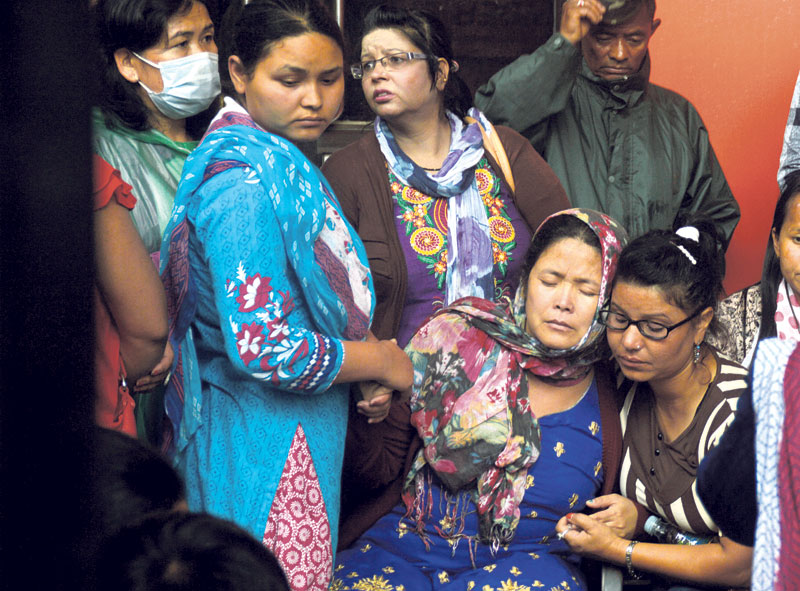 Parents and kin of one of the two school children who died after a retaining wall collapsed into their classroom wait to receive the body at B&B Hospital Friday. (Pratik Rayamajhi/Republica)

KATHMANDU, July 1: Officials at Pushpanjali Secondary School, where two students were buried to death when a retaining wall collapsed into their classrooms on Friday morning, said they had requested the land developer who built the wall not to erect such a heavy structure so close to the school.

School principal Puhamikanti Lepcha Bajracharya lamented that the children lost their lives as the land developer did not listen to repeated requests not to build the heavy wall right there.

“We had repeatedly asked the land developer to level the sloping land in the plotting area,” the principal said. The 10-foot retaining wall loomed above the classrooms.
The wall constructed with heavy rocks collapsed after rainwater weakened its base, leaving two students dead and 25 injured, a few of them seriously.

The school located at Taukhel, Badegaon in Godawari Municipality-6, had built its classrooms with prefabricated walls a few months after the devastating earthquake last year.

According to school officials, the retaining wall collapsed into Class III and VIII of the school, burying the students before they had time to escape.
Kripa Rai, 9, a third grader, died on the spot and Anjana Pun Magar, 10, of the same class breathed her last on the way to hospital, according to Metropolitan Police Range Office, Lalitpur.

The other students who were also buried by the collapse were rescued by fellow-students, teachers and a joint squad of security personnel. The seriously injured and those who were left unconscious were rushed to hospital.

According to SSP Pitambar Adhikari, chief of the Metropolitan Police Range Office, they are investigating the incident to pin-point responsibility.

Responding to allegations of negligence by the land developer as the major factor behind the mishap, SSP Adhikari said, “Why did the school continue running classes in those classrooms if they had already felt danger from the retaining wall?”

“We are not in a position to apportion blame right now,” he said adding that they were searching for the land developer.

Meanwhile, Education Minister Girirajmani Pokharel, who went to B&B Hospital and Model Hospital to see the victims, said that the Ministry of Home Affairs and District Education Office, Lalitpur have been instructed to investigate the matter without delay.

Dr Ashok Kumar Banskota of B&B Hospital said most of the students had sharp injuries in the upper part of the body and four of them had been transferred to the ICU ward.

The body of Kripa was sent to Patan Hospital for autopsy while that of Anjana was being kept in the mortuary there  as her family were yet to reach Kathmandu from outside the Valley. Hospital premises were filled the whole day with the kin of the dead and officials of the government, the school and parents organizations.

+2 schools bar students from taking subjects of their interest

KATHMANDU, July 16: Almost all schools operating Grades 11 and 12 have forced their students to choose subjects against their... Read More...

Sindhupalchowk landslide; One dies, four others go missing
12 minutes ago