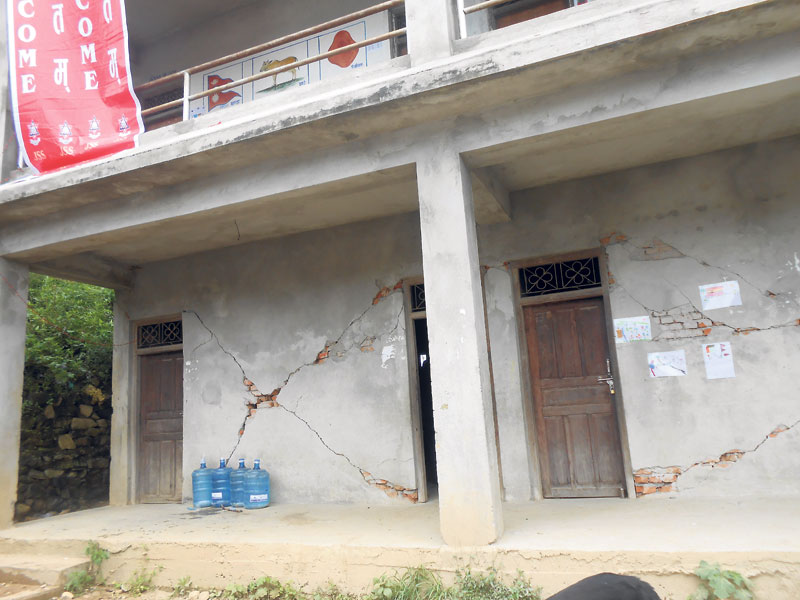 MELAMCHI, Sept 29: Some 500 students of Jalapadevi Secondary School in Melamchi Municipality, Sindhupalchowk district have been risking their lives every day by attending classes in a dilapidated building for over a year.

The deadly earthquake last year damaged the three-storey main building of the government school, located just about 39km north-east from capital city of Kathmandu.
Soon after the earthquake in April last year, the government inspectors gave the public school a red sticker, marking the building as hazardous.

However, the students from pre-primary to grade 12 have been attending classes in the rundown building in lack of safe classrooms and tents.

Bal Kumar Acharya, a 10th grader, said that at first they were afraid of even entering the building. “However, we have gotten used to these days,” he said.

Another student, Laxman Tamang, who studies in the 6th grade, said they have no choice but to continue their studies in the dilapidated building. “The condition of the building no longer scares me.”

Seventy-three-year old Dhal Prasad Dhakal, whose granddaughter and grandson study in grade 8 and 9, respectively, always sends them to school with a heavy heart.

“We asked the school authority not to conduct classes within the unsafe walls of the school,” he said. “We requested them to teach students under tents but to no avail,” he added.

Bharat KC, a senior teacher of the school, admitted that the school had been marked unsafe by government inspector. “We tried to arrange tents for running temporary classrooms but our efforts went in vain,” he said.

Rudra Hari Bhandari, district education officer of Sindhupalchowk district, said that 95 percent of the school buildings in the district were devastated by the quake.

DEO Bhandari said that the building of Jalapadevi Secondary School will be built within a year. “Education First, an INGO, has been working to complete the construction of the building within a year,” he said.

Vice President Nanda Bahadur Pun on Wednesday laid a foundation stone of the new building to be built as per Japanese engineering design and funded by EF, the Chinese organization. “The construction of damaged schools should have been completed within a year of damage,” he said. “I hope the new building of Jalapadevi School will be completed within a year,” he added.

Bhandari claimed that all damaged schools of the district will be reconstructed within three years as per the plan of the Ministry of Education.