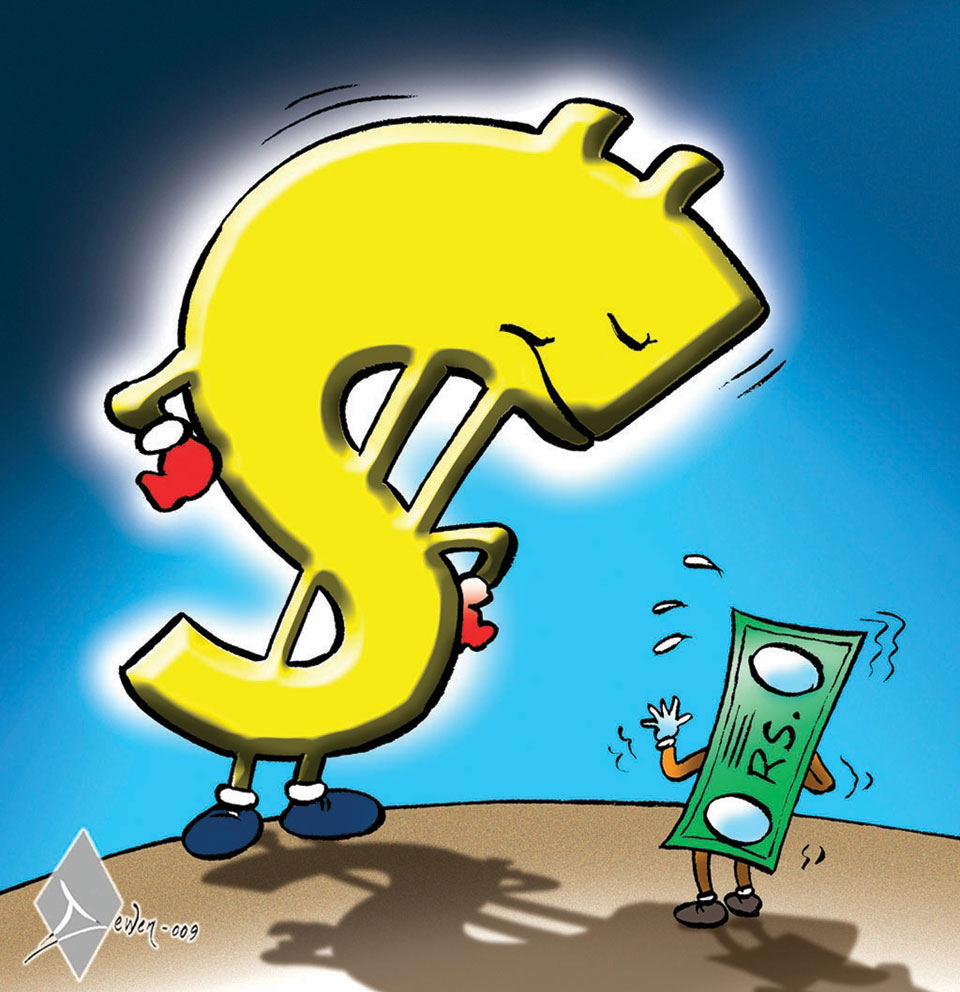 KATHMANDU, Sept 9: The value of Nepali currency against the US dollar is on a freefall for the last few weeks. Though the Nepali rupee recovered marginally to Rs 115.08 against a US dollar from the earlier day’s record low of Rs 115.48, the volatility of the currency is likely to put a pressure on the external sector stability of the country.

Since the import of the country is rising at an alarming rate, the value of the domestic currency remaining at the lowest level is likely to do more harm than benefit the economy.

As the country imports most of the things consumed in the country, the higher bill of imported items will also be passed on to the end users. This will put upward pressure on inflation. If the domestic currency continues to plummet, the government and the Nepal Rastra Bank (NRB) will face tougher time ahead to rein in the price rise.

The NRB has said that the inflation will be contained at 6.5 percent in the current fiscal year 2018/19. The stronger US dollar means that imports are going to be expensive for the country. The immediate effect is going to be observed in petroleum products. For example, the appreciation of the US dollar by even one rupee adds Rs 150 million in additional cost to the Nepal Oil Corporation (NOC) for import of petroleum products in the country, according to the NOC’s estimate.

The import of petroleum products accounts for nearly one-fourths of the total imports of the country. If exports of the country were strong, the country could have taken advantage from the currency depreciation. Some countries are even tempted toward devaluing their currencies to boost their exports because the low value of currency makes their products cheaper for foreign buyers. However, the low volume of export leaves a little room for the country to reap benefit from the recent decline of the domestic currency.

Rise of import during the period when dollar remains at a higher side and slowdown in export growth as has been the case for Nepal is also likely to deteriorate the trade deficit and balance of payment.

But, there are some sectors in the economy that are going to benefit from the stronger dollar. Tourism businesses and remittance receiving households stand to gain from the decline of the Nepali rupee against the dollar.

The Nepali currency is getting weaker in recent days against the greenback in line with the rapid fall of the value of Indian rupee vis-à-vis US dollar.

In recent weeks, the value of Indian currency is taking a steep dive on account of strong US consumer confidence data that is prompting investors to pull out their investments of emerging economies like India to invest in the US and in the American currency.

The exodus of investors from emerging markets like India follows the recent decisions by the Federal Reserve, the central bank of the US, to raise its policy rate which has remained at rock-bottom level since the financial crisis of 2008.

The decisions to raise rates in the wake of strong data supporting the recovery have put pressure on the currencies of emerging economies where international investors were pouring their investments seeing the huge potential. The Indian currency has become one of the worst performing currencies in Asia in recent months.

US dollar at all time high while Nepali currency weakens

KATHMANDU, March 8: The Nepali currency on Tuesday plunged to a record low against the US dollar with Nepal Rastra Bank... Read More...

KATHMANDU, Dec 7: The Nepali Rupee weakened to a two-month low value against the US dollar, with Nepal Rastra Bank (NRB)... Read More...

27 monkeys drown in pond
6 minutes ago