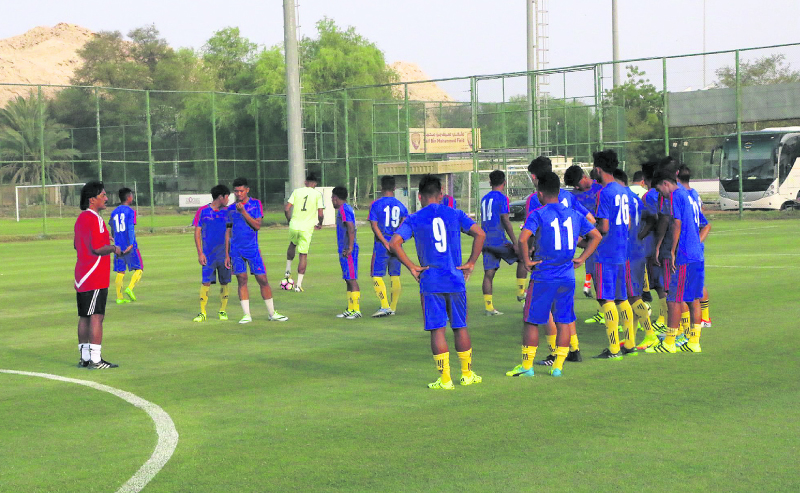 KATHMANDU, July 14: Nepal U-23 football team, which is to start its qualifying campaign on Saturday, has been going through a poor preparation even as it takes on strong opponents starting with the UAE U-23 on Saturday.

Nepal will take on the host UAE in its first match of Group ‘D’ in Tahnoun Bin Mohamed Stadium, Al Ain.

Nepal, who defeated Bangladesh U-23 team as a preparation for the qualifiers in Satdobato last week, will have a plus point in their hands as they face the UAE side on a tensed affair. But, that result would not be enough to rely on.

Nepal that faced a weak Bangladesh side as a practice match is taken as the weakest side on paper in the group which contains Asian football heavyweights.

Lebanon and Uzbekistan are the other teams besides Nepal and UAE in the group ‘D’.
Skipper Bimal Gharti Magar, who scored the winning goal against Bangladesh, said, “We will be facing strong teams in the qualifiers. It would have been very good for us if we had faced 2-3 strong teams instead of Bangladesh. So, the friendly against them won’t be enough for us.’’

Coach of U-23 team Raju Kaji Shakya agreed with his skipper. After winning against Bangladesh, Shakya had said, “Bangladesh is not a strong team and it would have been a lot better, had we faced an even more strong side. We could have improved on the mistakes if we had played a little earlier and not in the dying stages.’’

Shakya was of the view that the Nepali side will field with the reality in mind that it has to face a strong side in a short span of time.

“We will be facing UAE confidently and try to pull out a good result with hard work. Our aim is to play good football from our side,’’ Shakya said. “There are strong sides but we are not in a mood of surrendering.’’

Nepali side played a practice match as soon as they reached UAE on Thursday. Team manager Sanjeev Mishra said that they went along when practicing in 41 degree temperature.

Mishra accepted the fact that they have a slimmer chance of qualifying to the next year’s AFC U-23 Championship in China.

“We always have a chance in the age group but players from rival teams have already started to play professional football and have got more exposure. So, we will play with the aim to prove that Nepal is playing to improve Nepali football,” Mishra said.

Based on the FIFA world rankings, Uzbekistan is the strongest and Nepal the weakest in the group. Uzbekistan is in 65th position; Nepal in 170th; while, UAE is 75th and Lebanon is in 124th.

Previously, UAE had managed to qualify for the quarterfinal spot in 2014 and 2016 editions.

UAE, who are playing in the home, aspire to book the ticket for the championship in China. They want to improve on the previous record of getting knocked out from the last eight. UAE has to start with a win against Nepal to better its record.

Uzbekistan will take on Lebanon in the same stadium after the Nepal-UAE match.
Nepal will face Uzbekistan on July 17 and Lebanon in the final match on 19th July.
The best five among all the 10 group winners and runner-ups will qualify for the next year’s tournament. The best 6th side among the winners and runner-ups will also qualify for the tournament if China emerges either as the group winner or the runner-up.
China will face Cambodia, Japan and Philippines in

Look at the brighter side of life

The world is filled with all kinds of people. Some are helpful, kind and caring while others are just the... Read More...