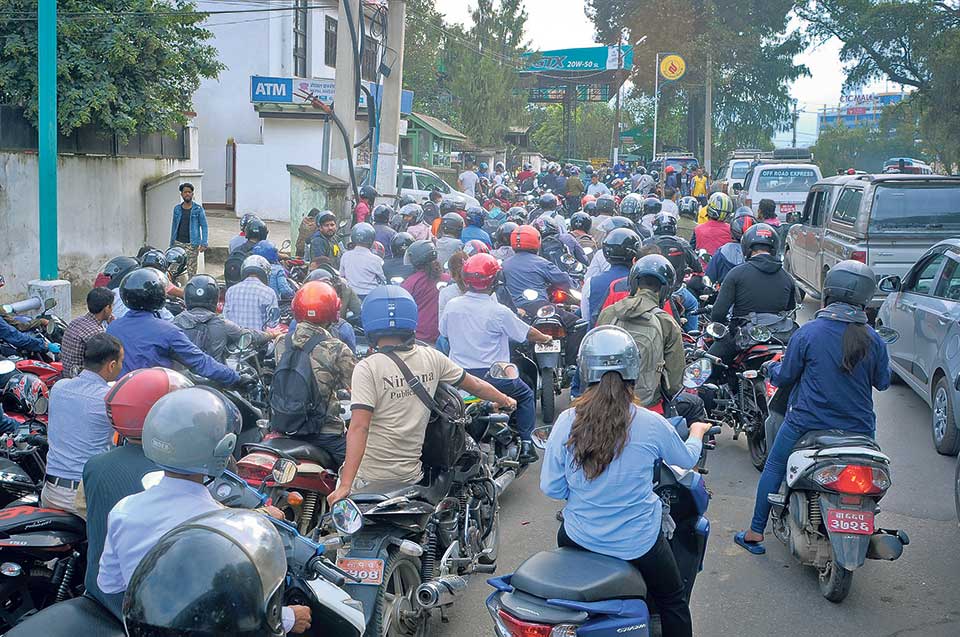 KATHMANDU, Sept 21: Strike of public transport workers has disrupted supply of petroleum products across the country.

Drivers of petroleum tankers say that they were unable to bring petroleum products from refineries in India due to the strike of public transport workers. As a result, long queues have formed at petroleum pumps across the country

Though there were news reports that drivers of fuel tankers have stopped going to India to load petroleum products to express their solidarity with the strike, they have denied their involvement after Nepal Oil Corporation (NOC) warned of action, including scrapping the contract of fuel transport, if they do not return to work.

“As the NOC has already agreed to fulfill our demands some time ago, there is no point of doing any protest now,” said Ishwor Lama, president of Nepal Petroleum Tankers Drivers Association. “There is problem in Bara, on the way to India, due to strike of public transport workers. They have stopped our friends from going to India," Lama added. "We will be able to go to Indian refineries to load fuel only if the government assures us on security." Lama also said that tanker drivers have been attacked by rowdy agitators in some parts of the country.

He, however, added that drivers have not stopped supplying petroleum products to petrol pumps from NOC's depot in Thankot depot.

Bharat Regmi, chief of the NOC's Thankot depot, also said that the depot has been supplying fuel to pumps as usual. “We supplied 536 kiloliters of petrol to different pumps on Thursday compared to the average daily supply of 600 kiloliters. This should be sufficient to meet the demand," he said, attributing long queues at pumps to public holiday on Wednesday. "As there was no supply on Wednesday, consumers might have thought that fuel will be in short supply."

According to Regmi, the Thankot depot has 3000 kiloliters of petrol in stock which can meet demand of at least four days. "By that time, I am hopeful the disturbance created by some drivers would end, helping to normalize the supply,” he added.

Nepal Independent Transportation Drivers' Struggle Committee has called a strike from Tuesday, demanding amendment to Vehicle and Transportation Act-2049 which, they argue, is against them. They have submitted 13-piotn demand to the government which, among others, calls for rollback of some provisions that proposes increment in punishment for drivers for death resulting from driver's negligence.

KATHMANDU, May 6: Government and the agitating transport entrepreneurs have reached an agreement following the meeting between them on Sunday... Read More...