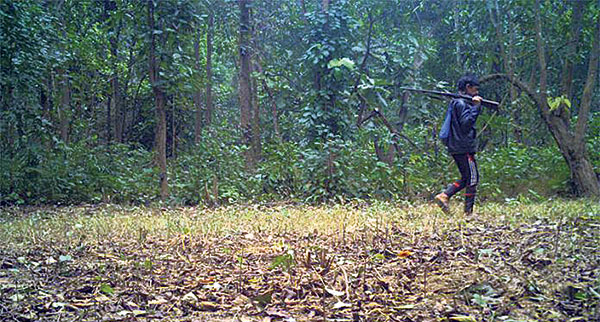 Photo Courtesy: Banke National Park / A poacher captured in a camera while he was moving in the jungle a few weeks ago.

NEPALGUNJ, Feb 2: A video camera installed for tiger census at Banke National Park recently captured a poacher roaming around with a gun on his back. Fifty such cameras were installed at different locations of the park about a month ago to count the number of tigers.

After noticing the poacher, authorities scanned other cameras too but couldn't find other such images.

According to the park officials, they started investigation identify the person captured in the image. In course of investigation, Bhev Raj Khatri of Raptisonari Rural Municipality-9 was identified as person with the gun and was arrested while from his home.

However, they failed to find the gun as he had reportedly left it in the jungle. Khatri initially denied his involvement in the act.  Later, after much interrogation, he accepted that he had been to the jungle for poaching. The national park has filed a case against him under the National Park and Wildlife Conservation Act. Similarly, Nepal Police has also filed a case against him for possessing gun.

As per the information shared by the national park authorities, it is the third time Khatri has been held for poaching. He was caught for the first time for killing a wild boar and selling its flesh. The second time, he had killed a 'nirbiralo,' an endangered species of wild cat.

Even though he was caught for the third time Khatri seemed unperturbed, according to a national park official. Requesting anonymity, the officer said that the reason behind the confidence of Khatri is his 'link with the powerful people'.

“Even when he was caught before, he was simply allowed to walk free,” he said.
Khatri has earned the reputation of an infamous poacher among the locals.

This time, the park officials are hopeful of Khatri getting due punishment. The reason is that he is currently facing two charges at the same time. Both Nepal Police and the National Park have filed separate cases against him, making him vulnerable, according to the officials.
Poachers posing challenge

Even though the national park authorities claimed to have used a large manpower and other resources, poaching has not stopped bothering them. Police and army patrols have made a very little impact, according to the park officials.

“We have a huge pile of cases related to poachers. They are just gathering dust. We have indeed not been able to take quick and effective action,” a conservation official said.

BARDIYA, Aug 26: Bardiya National Park has been providing sanctuary not only to wildlife but also to poachers who hunt... Read More...

Bardiya National Park area is dying! Who will protect?

As a student of forestry, I had to conduct research for my practical assignment which led me to Bardia for... Read More...