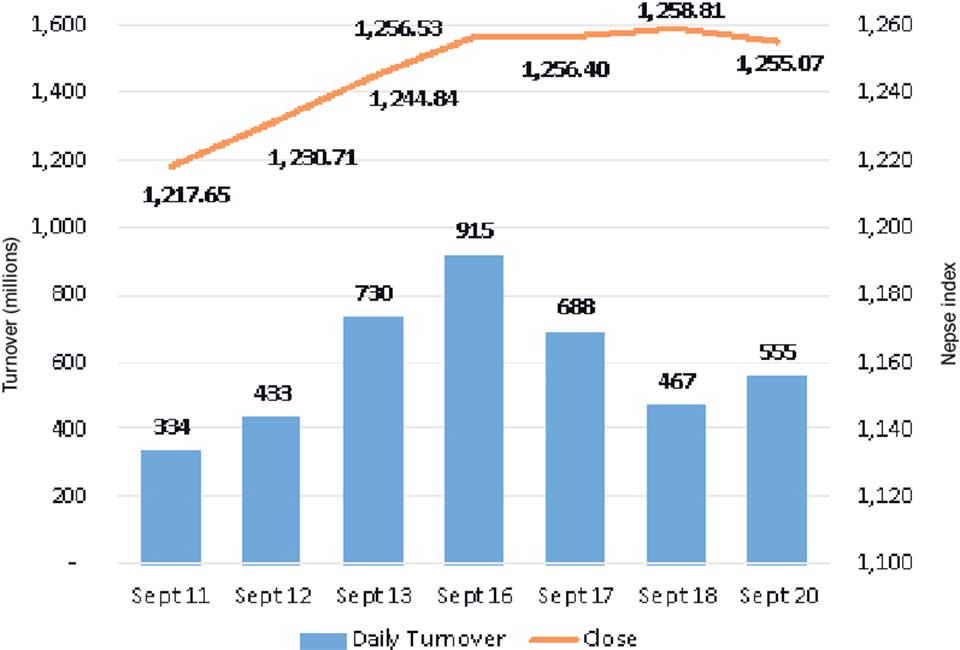 KATHMANDU, Sept 21: Stocks came under pressure since the beginning of the trading session on Thursday. Consequently, the Nepal Stock Exchange (Nepse) index shed almost 9 points by noon. Nonetheless, stocks recouped some of its losses in the remaining trading hours to end slightly lower. The Nepse index closed at 1,255.07 points – a drop of 3.74 points -- compared to Wednesday.

The meager movement witnessed in the bourse of late indicates the market trying to consolidate following the recent rally. Market participation improved in the last trading of the week as a total turnover of Rs 555 million was recorded in the exchange. The index trying to stabilize suggests that investors have remained upbeat despite profit booking experienced in some of the trading sessions in the past weeks.

Majority of the market sectors struggled on the day. Sub-indices of only Hotels, Development Banks and 'Others' sub-groups ended the day higher. Significant weakness was visible among Non-life Insurance stocks as the segment's sub-index tumbled 1.75 percent. Life Insurance scrips followed suit as the group's sub-index went down by 1.39 percent. Further, Hydropower, Microfinance and Manufacturing & Processing sub-indices fell 0.54 percent, 0.33 percent and 0.24 percent, respectively. Trading sub-index remained unchanged on the day.

Sanima Mai Hydropower Ltd led the list of active stocks on Wednesday, recording a turnover of over Rs 74 million. The energy sector company has not distributed any dividend till date. However, the sudden increase in its trading indicates investors' optimism toward the possibility of a dividend payout this year. Shares of NIC Asia Bank Ltd were also actively traded on the day. Shares worth Rs 420 million of the commercial bank changed hands on the last trading day of the week. Further, other commercial bank scrips including NMB Bank Ltd, Prabhu Bank Ltd and Nepal Bank Ltd remained active on Thursday.

On the contrary, Synergy Power Development Ltd declined the most as it lost 5.88 percent on its share price. Himalayan Power Partner Ltd's stocks also dropped 4.81 percent on the day. Next on the list was United Finance Ltd which saw its share price drop 4.76 percent after the company declared 5 percent cash dividend to its shareholders. Meanwhile, share prices of Arun valley Hydropower Development Company Ltd and Sanima Equity Fund depreciated by over 4 percent each.

Among the companies announcing dividends, Miteri Development bank Ltd has announced 17 percent bonus shares to its shareholders. The decision, however, is yet to be approved by the development bank's annual general meeting (AGM).

KATHMANDU: The equity market came under pressure from the starting of Wednesday's trading session as the Nepse index shed more... Read More...

KATHMANDU, Dec 3: The Nepal Stock Exchange (Nepse) index has stabilized to some extent as compared to the first trading... Read More...