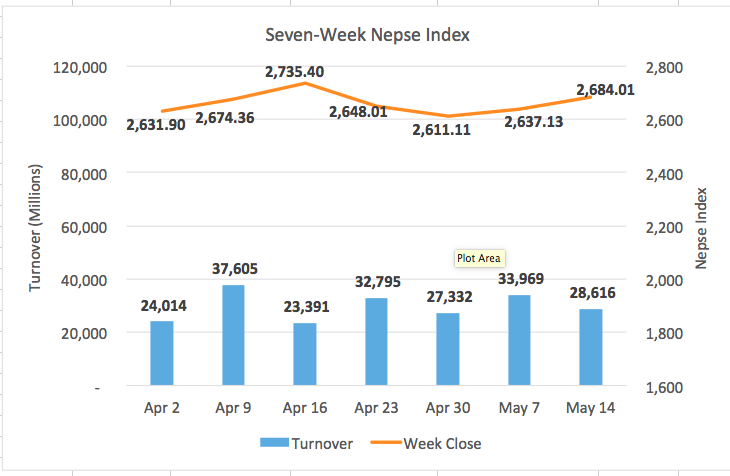 KATHMANDU, May 15: Stocks opened this week’s trading on a negative note stretching its decline from the prior week. The Nepal Stock Exchange (Nepse) index fell 18.50 points on Sunday. However, with back-to-back gains of more than 27 points on Monday and Tuesday, the benchmark recouped all of its losses from the prior three sessions notching its highest level in over 3 weeks. Gains tapered on Wednesday with the index eking out a 0.56 point’s gain. Further, the last trading day of the week saw an advance of 10.13 points pushing the index 46.88 points higher for the week. Nepse ended week’s trading at 2,684.01.

With advance seen in four consecutive sessions, the index now rests just shy of 2,700 psychological mark. Buying interest seen in almost all sectors helped the index recoup its late April losses. The prohibitory order has had little to no effect in the equity market so far. Barring minor corrections, the local bourse has witnessed steady trading. Turnover, however, dropped marginally with the exchange registering a daily average turnover of Rs. 6.79 billion in the review period.

Indicator of Class ‘A’ stocks also pointed towards upbeat performance. Sensitive Index climbed 1.36% in the week on review. In terms of traded sectors, Finance sub-index rose the most and ended 7.24% higher. ‘Others’, Manufacturing & Processing and Non-Life Insurance stocks, similarly, saw notable strength and closed up by 4%. Development Bank sub-index advanced 3.83%, followed by Trading and Hydropower sectors which added 2.96% and 2.69%, respectively. All other sectors ended in green, barring Hotels & Tourism s group, which fell 0.88%.

In the other news, Sunrise Capital Ltd concluded allotment of the Initial Public Offering (IPO) shares of CEDB Hydropower Development Company Ltd on Friday. The issuance of over 2.5 million unit shares gathered applications from over 1.6 million participants. On the general public space, 234,195 applicants were allotted a minimum of 10 shares with four applicants receiving an additional share.

On the weekly technical front, the formation of a bullish candlestick with long lower wick suggesting buyers controlling the market after the index hit its week low at around 2,610. Besides, the index has also found a notable support at 2,600 mark making a plunge below the psychological level highly unlikely. An advance from the current range can see the index test resistance at 2,735.

KATHMANDU, June 12: Following a gain of 41.37 points in the week earlier, the bourse continued to see upbeat movement since... Read More...