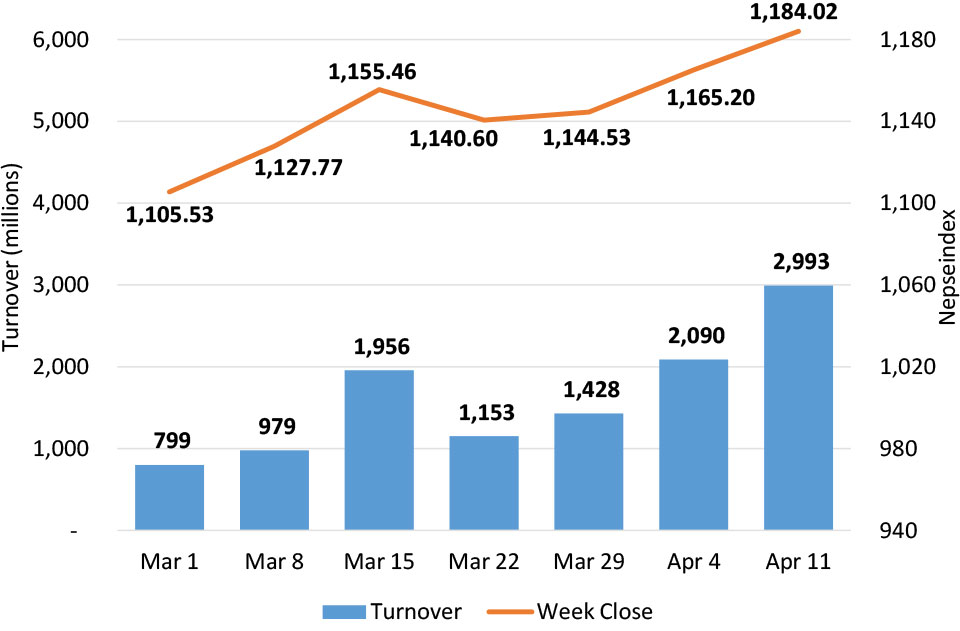 KATHMANDU, April 13: Nepal Stock Exchange (Nepse) index opened the last trading week of Nepali year on a strong note. The benchmark index added more than 17 points on Sunday. Strength carried over to Monday's sessions as the index went up another 9.32 points. Though the index witnessed some correction midweek and wiped more than 10 points on Tuesday, it saw marginal movements on Wednesday and Thursday with the index eventually closing the week 18.82 points, or 1.62 percent, higher at 1,184.02 points.

Consequently, the index has closed higher for three consecutive sessions logging total gains of over 40 points. Investors seemed optimistic ahead of the start of Nepali New Year as buying pressure prevailed in recent sessions. Mainly, banking stocks saw strength during the period as investors prepared for corporate earnings reports which are due following the end of the third quarter. The quarterly reports are the next key catalysts which is likely to affect the overall market movement over the next few months.

Class 'A' stocks outperformed the broader market as reflected by a 2.04 percent rise in the Sensitive Index. On the sectoral front, market heavyweight banking stocks led the week's gains. Banking sub-index shot up by 2.67 percent. Life Insurance and Microfinance stocks followed suit with gains of 1.81 percent and 1.66 percent in their respective sub-indices. Likewise, sub-indices of Non-life Insurance and Development Bank segments jumped by over 1 percent each, while Finance sub-index edged 0.36 percent higher. Biggest losses came from Manufacturing & Processing sector which saw its sub-index fall by 3.44 percent. Hydropower stocks also struggled as the group's sub-index dropped by 1.22 percent. Hotels and 'Others' stocks also logged marginal losses.

NIC Asia Bank Ltd was the most actively traded scrip in the week. More than Rs 252 million worth of its shares changed hands in the week ending Thursday. The scrip has witnessed a gain of over 17 percent so far in April. Secondly, Rs 177 million worth of shares of NMB Bank Ltd were traded this week. Kumari Bank Ltd also saw substantial turnover as Rs 150 million worth of the Class 'A' bank's shares were trading this week. The bank is holding its Annual General Meeting (AGMs) for fiscal years 2016/17 and 2017/18 on May 9. The meetings are due to approve 12.75 percent and 8.5 stock dividend for the respective fiscal years.  Further, Neco Insurance Co Ltd, Nepal Bank Ltd and Nepal Credit and Commercial Bank Ltd witnessed turnovers of Rs 130 million, Rs 120 million and Rs 108 million, respectively.

In other news, Nadep Laghubitta Bittiya Sanstha Ltd is holding its Annual General meeting (AGM) on May 9 to endorse 15 percent bonus shares, among others. The micro sector lender will also be electing two members in board of directors from ordinary shareholders.

KATHMANDU, Sept 13: The stock market opened lower this morning, remained under pressure till the close of the session. At... Read More...