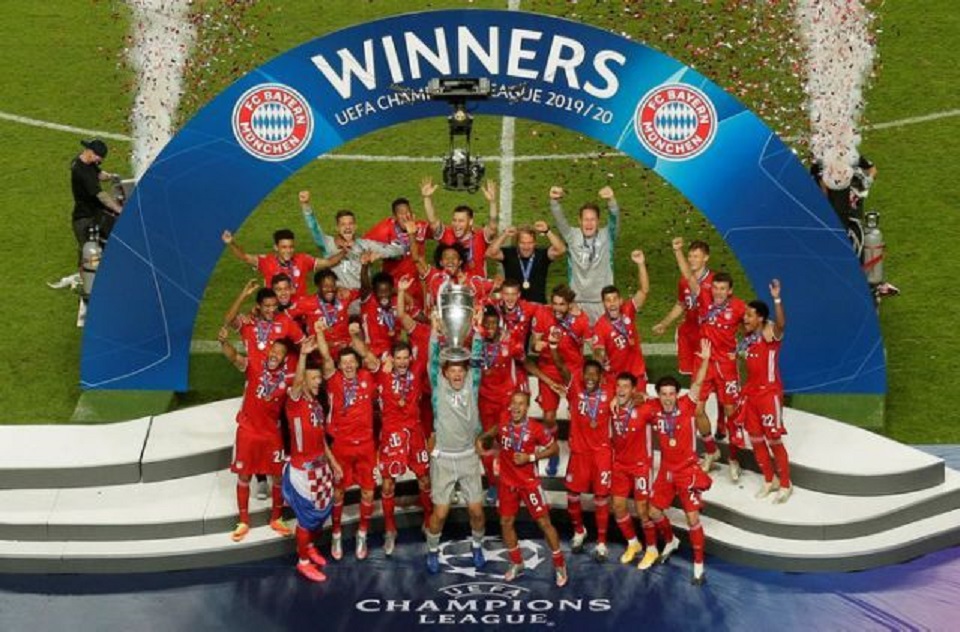 France international Coman appeared at the back post to head the decisive goal in the 59th minute as Bayern became the first team to lift the Champions League with a 100% record.

There were no fans to witness the triumph but Bayern celebrated as though 80,000 were cheering and, even as the lights went out nearly two hours after the final whistle, three players still sat in the centre circle, savouring the moment.

The victory at the Estadio da Luz, deserved after a dogged display once Bayern got in front, secured a second treble for the Germans, the Bundesliga and German Cup winners, and completed a remarkable first season for coach Hansi Flick.

Flick took over a struggling side in November, after a 5-1 hammering by Eintracht Frankfurt led to the sacking of Niko Kovac with the club fourth in the Bundesliga.

“It feels fantastic, we have a long journey behind us,” said Bayern midfielder Thomas Mueller.

“We came from very low, at least that is what it felt like, in the autumn and put in a sensational run. We had a bit of luck tonight and had (Manuel) Neuer in goal,” he added.

PSG, who were playing in their first Champions League final, paid the price for wastefulness in the first half as Neymar and Kylian Mbappe failed to beat Neuer from close range.

The French club has benefitted from huge investment by Qatari Sports Investments but, while dominant in their domestic league, they fell short at the final hurdle in Europe.

“We’re sad but we don’t forget all the positive things we did this season,” said PSG’s Qatari president Nasser al Khelaifi.

Flick opted to start with Coman instead of Croatian Ivan Perisic on the left flank and it was an inspired decision.

Jerome Boateng was deemed fit to start in Bayern’s central defence, having recovered from a knock picked up in the semi-final win over Olympique Lyonnais.

After a cagey opening, Neymar burst into life in the 18th minute, scampering into the box and firing off a left-foot shot but Neuer’s outstretched leg foiled the Brazilian.

It was hardly an easy chance but it was the kind of opportunity that PSG fans were hoping their 222 million euro ($261.89 million) striker would turn into a moment of glory.

Four minutes later Bayern’s goal threat, Robert Lewandowski, was found in the box by a left wing cross from Alphonso Davies and given too much room to turn but his shot struck the post.

PSG were certainly asking questions of the Bayern defence and the livewire Angel Di Maria, after a quick exchange on the edge of the area, created space for a shot but his effort, with his weaker right foot, flew high and wide.

Bayern’s gamble to start Boateng looked misplaced when he hobbled off in the 25th minute, being replaced by Niklas Suele.

PSG’s industrious midfielder Ander Herrera then had a fierce effort from distance deflected wide, while at the other end Lewandowski’s stooping header from close range forced a fine reflex save out of Navas.

Mbappe, PSG’s talented French World Cup-winning striker, should have done better just before the break when, after a smart one-two with Herrera, he shot straight at Neuer.

It was a scrappy start to the second half with both sides struggling to find any composure but the game came alive just before the hour mark.

After a well worked move down the right Joshua Kimmich picked out Coman at the back post and he got behind Thilo Kehrer to head firmly into the bottom corner.

Coman threatened in the same area again moments later, after Mueller found him with a cross, and Thiago Silva had to block the volley.

Bayern were starting to look in control and PSG coach Thomas Tuchel responded by throwing on his Italian midfielder Marco Verratti in a bid to change the momentum.

But Flick’s side were in no mood to give up their lead and they fought for every ball with tenacity, reducing any chance PSG had to find openings for their expensive strikeforce.

One final opportunity did come, in stoppage time, when Mbappe broke down the inside-left channel and found Neymar who turned sharply but saw his shot go harmlessly wide.

The PSG dream was over, the debutant finalists defeated by the determination, organisation and remarkable consistency of the formidable and now six-times champions of Europe.