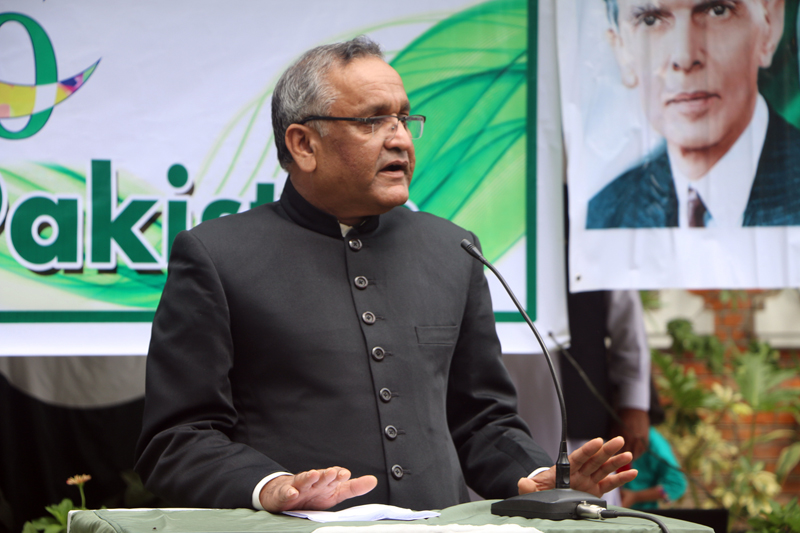 KATHMANDU, Feb 5: Pakistani Ambassador for Nepal Mazhar Javed on Tuesday said that the stability of entire South Asia region has been badly affected due to ongoing strife in Kashmir.

Speaking at a function organized to mark the 'Kashmir Solidarity Day' in the capital by the Embassy of Pakistan in Kathmandu, the ambassador expressed deep concern over the stalled process of the South Asian Association for Regional Cooperation (SAARC) due to Kashmir issue.

"The Kashmir issue has held the SAARC process hostage while threatening the peace and stability of the entire South Asia region," the envoy said adding that Pakistan will work to find solution by implementing consensus reached with India regarding Kashmir.

Condemning brutalities, rapes, murder and atrocities against Kashmiri people in the 'India-occupied Kashmir' by the Indian security forces, the ambassador was of the view that India should respect the rights of self-determination of Kashmiri people. He stressed the need for implementation of the United Nations Security Council's resolutions on Kashmir dispute adopted in 1948.

Shrestha, who is also the former ambassador to Russia, said that India should stop brutalities, rapes, murder and atrocities against Kashmiri people in the 'India-occupied Kashmir'.

"It is a matter of concern to us that the entire stability of South Asia region has been affected due to Kashmir issue. We hope that India and Pakistan will be able to find a solution on the issue soon," he said adding that the SAARC process should move forward in coming days.

On the occasion, diplomats from the embassy recited the message given by Pakistani Prime Minister Imran Khan on the occasion of 'Kashmir Solidarity Day'.

In his message, Khan said "the observance of the 'Kashmir Solidarity Day' commemorates the strong and unflinching resolve of the Kashmiris to achieve the inalienable right to self-determination from Indian subjugation."

Khan, in his message, said that such resolve of the Kashmiris had not weakened rather strengthened with every passing day and with each new act of Indian cruelty in the "India Occupied Jammu and Kashmir (IoK)".

Film Southasia 2017 back with 63 documentaries

Gearing up for Film Southasia 2017

We urge India to accept the truth: FM Gyawali
22 hours ago

Upper Tamakoshi Project likely to be delayed
12 hours ago

With 72 new cases, Nepal’s COVID-19 tally spikes to 675
7 hours ago
Nepali Congress stands for suspension of funds to parliamentarians
8 hours ago
Patient dies at COVID-19 ward of Bharatpur Hospital, swab samples collected for test
8 hours ago